We investigate the merging processes of spherical tokamak (ST)-type plasmoids confined in a conducting vessel by means of a particle simulation. For this purpose, (i) we have developed a new particle simulation model to analyze physics not only near the contact point of two STs, i.e., the reconnection point, but also in the entire region of a poloidal surface. We find that (ii) plasma heating occurs in a wide region, and kinetic processes which can be expressed as compressional heating and viscous heating from macroscopic viewpoints play main roles. By performing simulation runs for different ion-to-electron mass ratio $m_i/m_e$, we clarify that (iii) thermal energy partition of ions and electrons approaches $\simeq 3:1$, and the component perpendicular to the magnetic field for ions and the parallel component for electrons are dominantly heated, respectively. 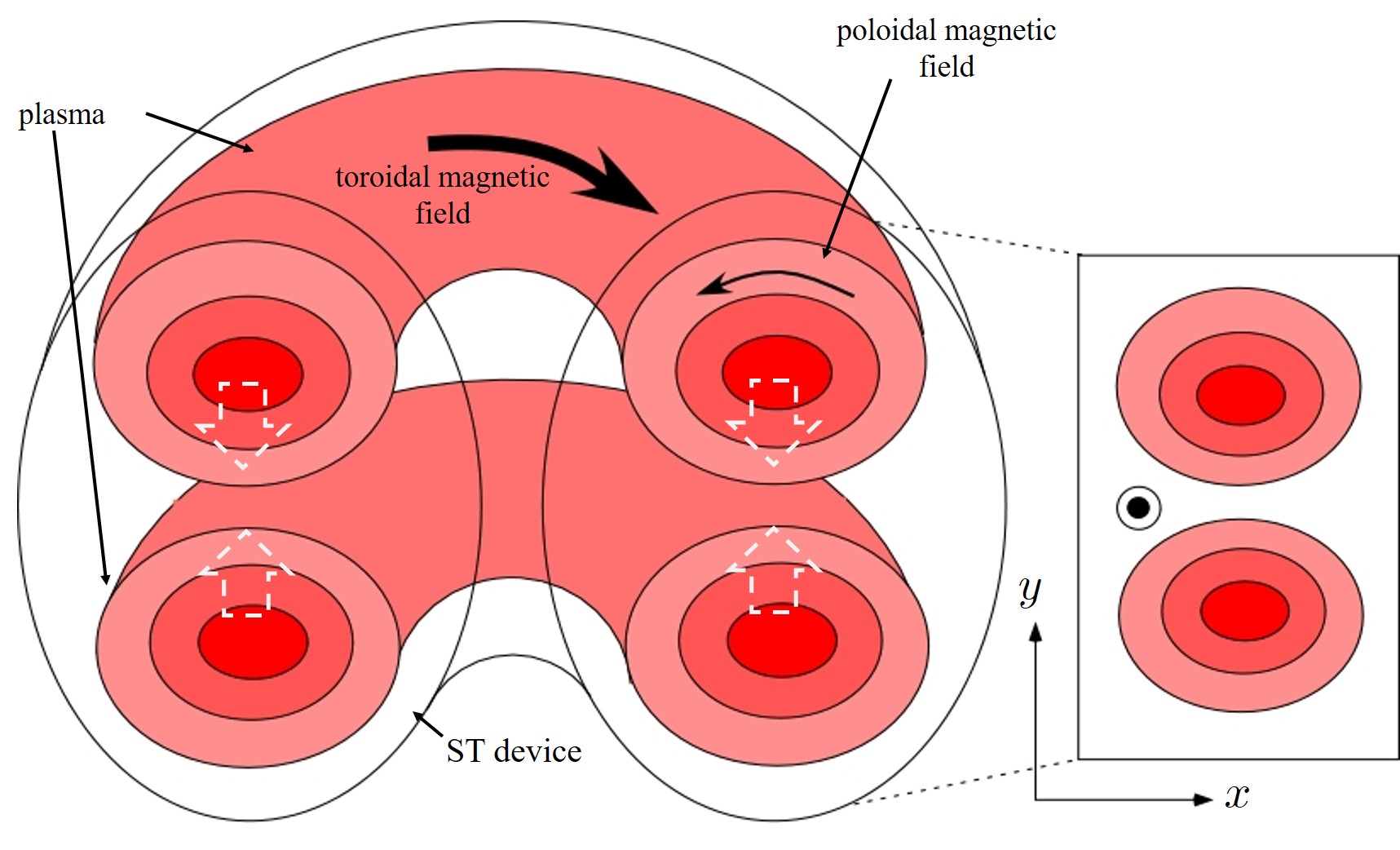 The merging of STs attracts attention as a candidate of future fusion reactors, since STs can confine higher-$\beta$ plasmas than standard tokamaks or helical devices. In the merging of STs, two STs with $\beta \sim 5 \%$ are merged through magnetic reconnection into a single ST with $\beta \sim 40 \%$ [A], So far, plasma heating in a local region near the contact point was focused on. Recently the advance of experimental methods such as 2D imaging measurement enables us to observe fine structures of heating and transport in a global region [B], but the mechanism remains to be unsolved. The elucidation of the detailed mechanism can lead to the higher performance of future ST reactors. For this purpose, particle simulation is one of the indispensable and powerful tools.

We investigate the merging processes of ST-type plasmoids by means of a particle simulation which we have newly developed [C]. Figure 1 shows the schematic diagram of our simulation model. The left part displays two plasmas in an ST device and the right part displays a poloidal plane simulated by the new particle code in a confinement system. The toroidal magnetic field $B_t$ exists in the simulation domain. The two plasmoids have the same plasma rotation in the poloidal plane to sustain the toroidal current density with the same sign. We set $\omega_{pe}/\omega_{ce} = 1.72$ and $\beta= 10 \%$ for the total magnetic field $B_0$, and $m_i/m_e=400$. The system size is $(7.46 \times 29.8) \rho_i$, where $\rho_i$ is the ion gyroradius for $B_0$.

The different points between the new [C] and previous models [D] are as follows. In previous works, particle simulations of reconnection have been carried out under an open boundary condition. Thus, energy for reconnection is supplied from the outside of the simulation domain [D]. Such models are suitable to simulation studies of magnetic reconnection in a local system. In contrast, the new model employs a closed system confined in a conducting vessel. In this model, most plasmas and energy are confined inside a newly formed ST, and energy available for merging process is limited. Thereby, magnetic reconnection is time-dependent and impulsive. In 2019, by the use of the new code, we have demonstrated a sharp peak impulsively appearing in the electron temperature profile[C], which can account for an experimental result in MAST[E]. 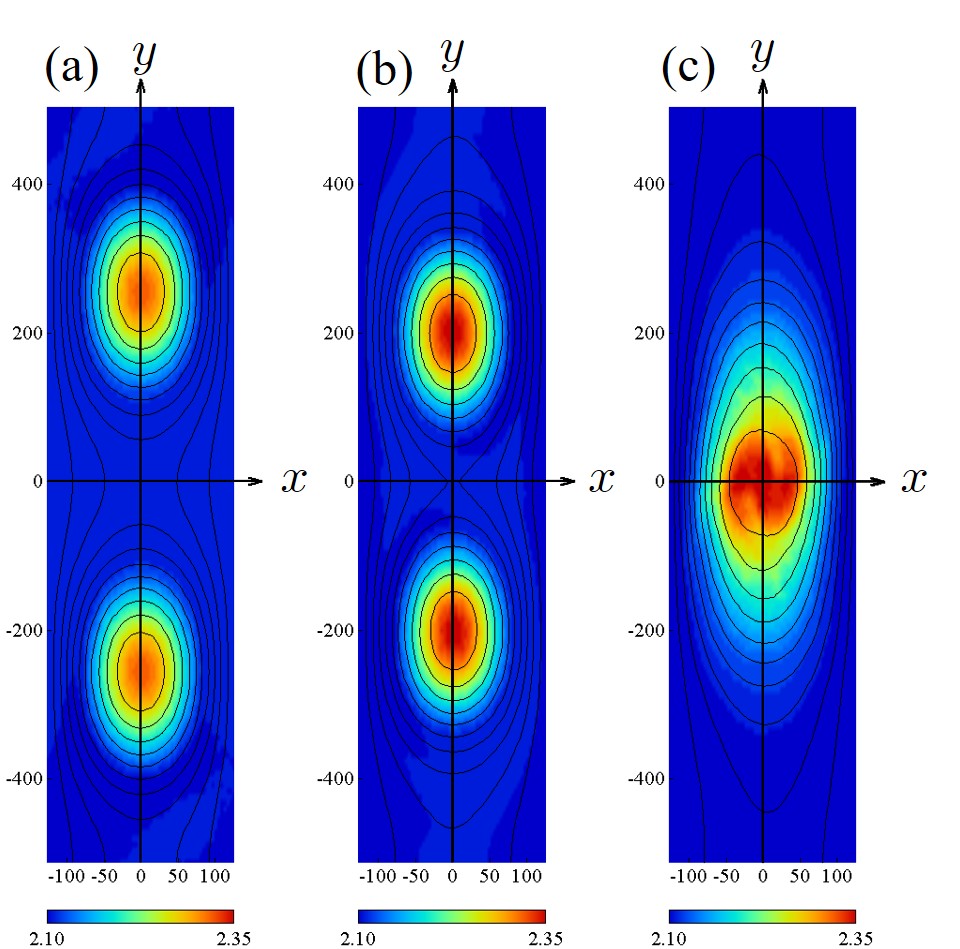 In Fig. 2, we show the time evolution of poloidal magnetic field lines and toroidal magnetic field (color contours). Initially two STs satisfy an MHD equilibrium condition, but they are in an unstable high-energy state. Thus, the two STs begin to approach each other by an attractive force $J \times B$ (Fig. 2 (a)). Magnetic reconnection occurs at the almost center position between the two STs with oppositely directed velocities (Fig. 2 (b)). Through magnetic reconnection, the two STs are merged into one large ST, as shown in Fig. 2 (c). 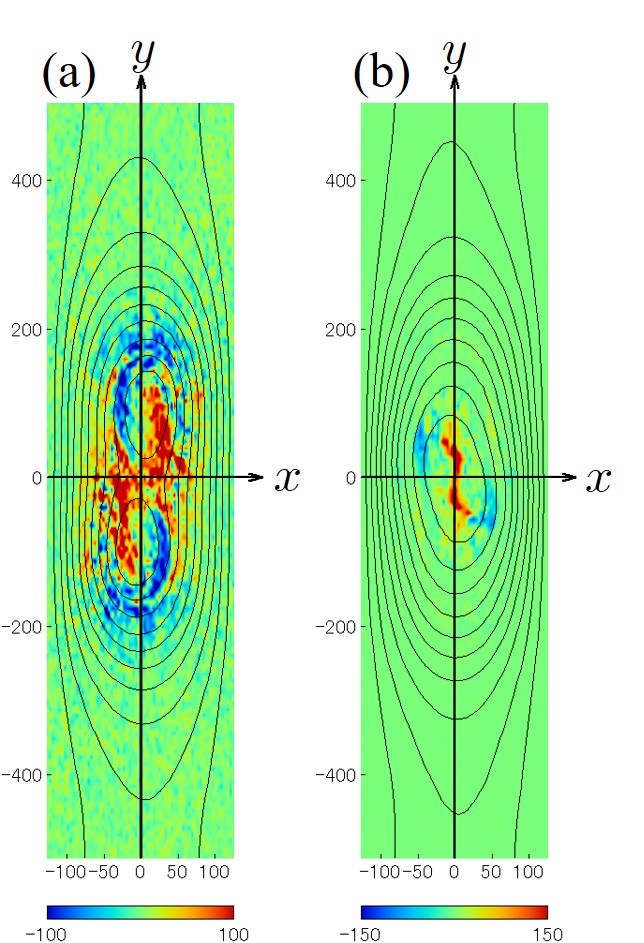 We observe ion heating occurring in a wide region, which qualitatively supports an experimental result in TS-6 [B]. During merging of two STs, the conversion from plasma kinetic energy of high-velocity bulk flow $u$ into thermal energy takes place through kinetic processes. These kinetic processes are macroscopically expressed as the compressional heating term ($H_{\rm cmp} =-5/2 P \nabla \cdot u$) and viscous heating term ($H_{\rm vis}=- \pi_{i,j} \partial_i u_j$), where $P$ and $\pi_{i,j}$ are scalar and off-diagonal components of the stress tensor, respectively. Figure 3 shows the profiles of $H_{\rm cmp}$ and $H_{\rm vis}$. At $\omega_{ce}t=2391$ (Fig. 3(a)), compressional heating is dominant, because the confinement region shrinks by the merging of the two STs. At $\omega_{ce}t=3120$ (Fig. 3 (b)), viscous heating is dominant near the central point. The merging system has a net angular momentum around the geometric axis, and thus large velocity shear is produced near the contact point, in which a mixing process takes place between particles in different origins through a kinetic effect. As a result of the heating, in this case, the maximum of $\beta$ is increased to $\simeq 20\%$. 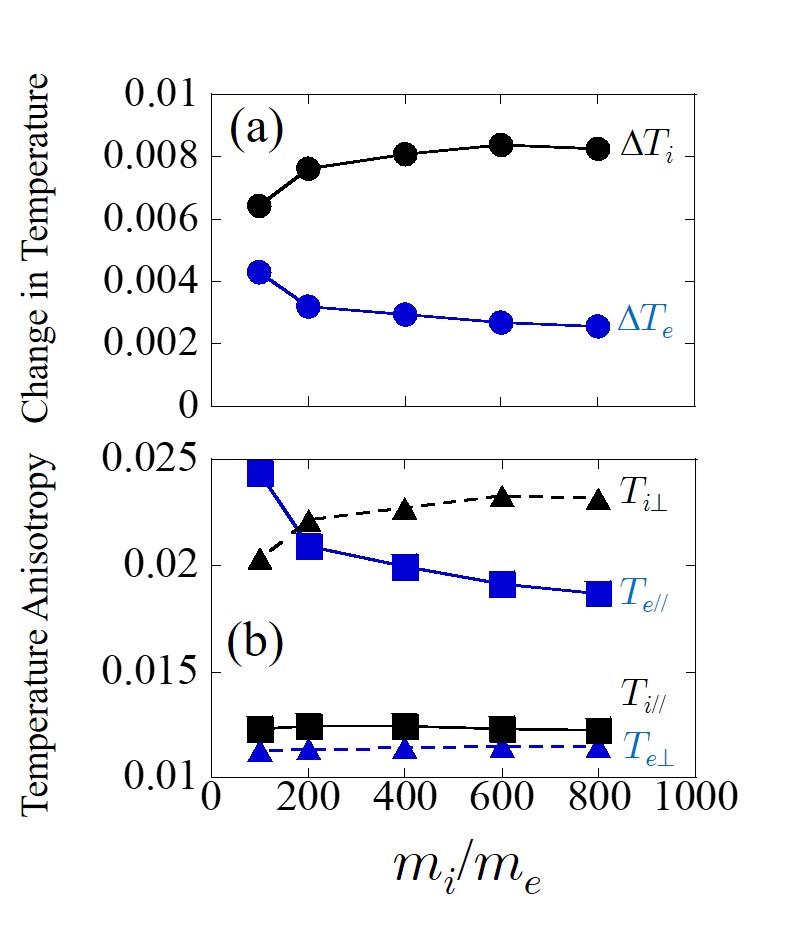 Lastly, we carry out various simulation runs for different values of $m_i/m_e$, where the initial ion parameters vary depending on $m_i/m_e$ while keeping the initial electron parameters constant in order to clarify the roles of the ion dynamics. Figure 4(a) shows that its partition rate approaches $\simeq 3:1$ as $m_i/m_e$ increases. Furthermore, we focus on the temperature anisotropy. According to Fig. 4(b), ions are heated dominantly in the direction perpendicular to the magnetic field, while electrons are heated mainly in the parallel direction. This is mainly because electrons moves along $B_t$ in the vicinity of the reconnection point, while two groups (STs) of ions with fast convergent flows $\pm u_y$ collide across $B_t$[C].