Whereas it is widely believed that velocity shear could suppress plasma instabilities and stimulate the transition from low (L-) to high (H-) confinement modes, the underlying physics of plasma instability suppression is still not clear. Often it is assumed that the stabilization of plasma instability characterized by the growth rate $\gamma _{inst} $ occurs when by the velocity shear $| V'_{0}|$ exceeds $\gamma _{inst} $ (e.g. see Refs. 1, 2). One of the complications of the analysis of the velocity shear effect on plasma instabilities is the non-Hermitian nature of the differential equations describing an impact of velocity shear on plasma/fluid instabilities [3]. However, we find that the situation is more complex and just effective Richardson number $Ri=(\gamma _{inst} /| V'_{0} |)^{2} $ cannot describe overall impact of $|V'_{0} |$. Employing radial'' density profile $n(x)=\bar{n}+(\delta n/2)tanh(x/w$) (where $w$ is the effective width of the density profile and $\bar{n}\gg\delta n$ are some constants) and analyzing the localized modes, we find [4] that for $\kappa =| k_{y} w|\gg 1$ ($k_{y} $ is thepoloidal'' wave number) the growth rates of both fluid Rayleigh-Taylor (RT) and plasma interchange (I) modes could be significantly reduced even for $Ri\gg 1$ (see Fig. 1a). 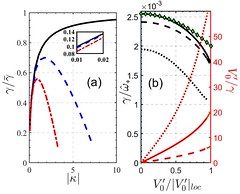 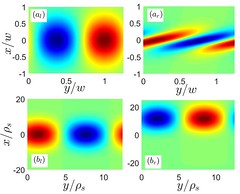