Experiments to stabilize the vertical position of the plasma were carried out in a small tokamak device, PHiX. By the experiments, we demonstrated for the first time in the world that the combined magnetic field generated with saddle coils (SCs) and toroidal magnetic field coils (TFCs) could stabilize the vertically unstable positions of the plasmas with nearly circular cross-sections. The results provide a new avoidance scheme of VDE (vertical displacement event) caused by disruptions which is a long-standing problem.

Generally, to achieve a high beta tokamak, it is necessary to elongate the plasma cross-section. Tokamak plasmas with higher elongation ratio $\kappa$, however, require more precise feedback control. In case of disruptions, plasma control failure leads to VDE, which inevitably limits $\kappa$. It has been reported that the vertical position can be stabilized by applying three-dimensional helical magnetic fields to tokamak plasmas in CTH [1], JIPPT-II [2], and the tokamak device that tested at Bell Laboratories [3]. Furthermore, it has been reported that the horizontal position was stabilized by the helical magnetic field in TOKASTAR-2 [4]. When normal continuous helical windings are used on such as CTH and JIPPT-II, however, an inevitable increase in the aspect ratio, raises the device size, and drops the $\beta_{\rm t}$ limit. Also, it is difficult to install and manufacture continuous helical windings that pass through the inner side of the torus. Therefore, in this study, we have a helical magnetic field with SCs installed on upper, lower and outer side of the torus just like the semi-stellarator windings at Bell Laboratories to stabilize the vertical position of plasma. In contrast to the semi-stellarator windings with complicated shapes, such SCs are easy to install even on existing tokamaks and can be equipped on DEMO reactors. 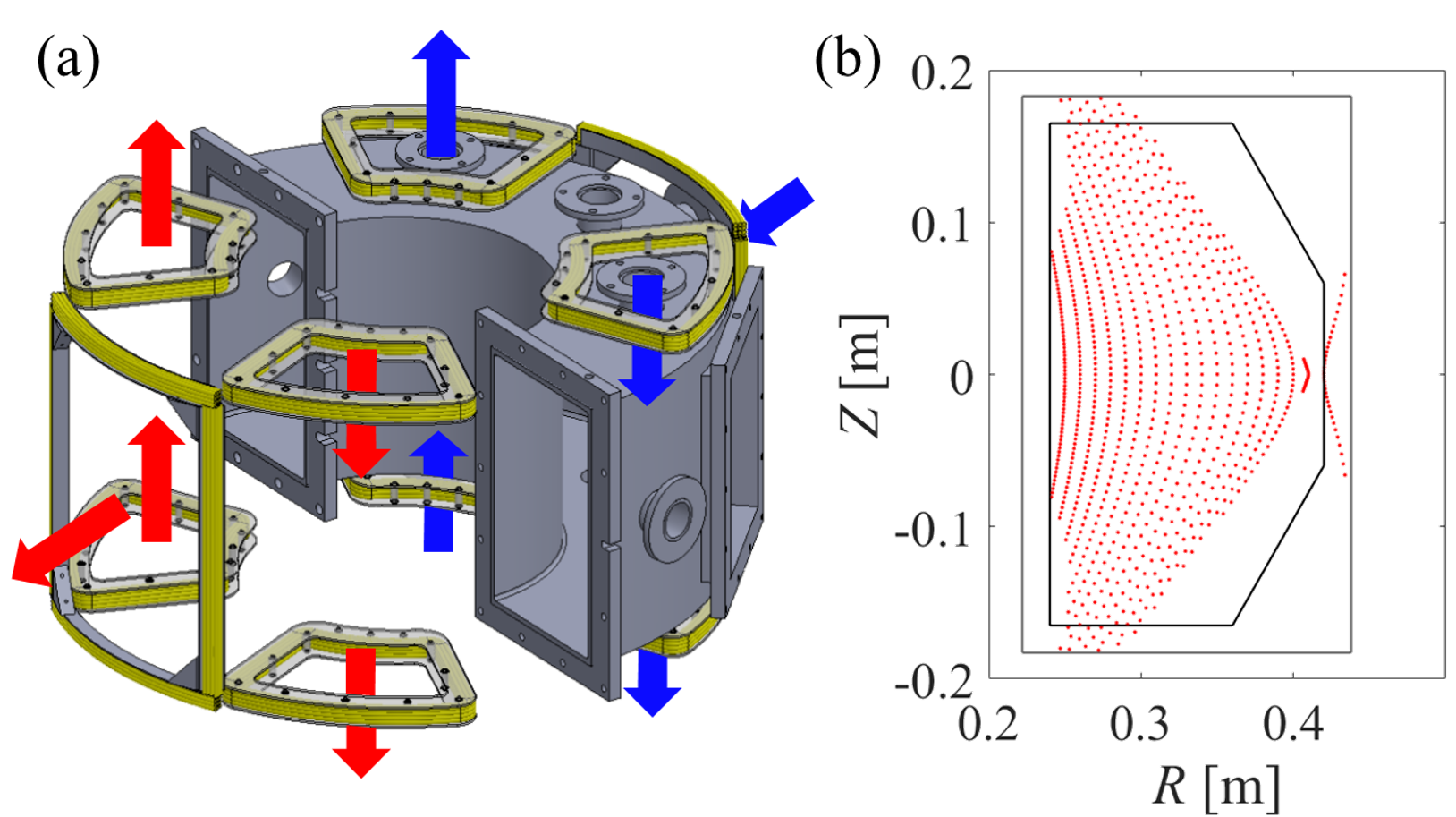 PHiX is a small tokamak device with a small plasma minor radius of 0.09 m, a major radius of 0.33 m, and a toroidal magnetic field of 0.091 T at the vacuum vessel center. This device was manufactured to demonstrate the stabilization of the vertical position of the plasma by an external three-dimensional magnetic field. The vertical position of the plasma of PHiX is unstable even when $\kappa\sim1$. Since vertically long vacuum vessel is adopted in PHiX, shell effects against vertical movements are expected to be little. In addition, the iron core is used and the n-index $(=-R/B_{Z}\cdot\partial B_Z/\partial R)$ of the vertical magnetic field is negative. Figure 1 shows the arrangement of SCs used in this experiment on PHiX and the Poincare plot of the combined magnetic field by SCs and TFCs. The pseudo-stellarator field is produced by rotating the direction of the magnetic field generated by SCs. In this arrangement, the Poincare plot of the poloidal section shows a magnetic field line structure curved in the direction of positive n-index. The experiment was performed by comparing tokamak discharges with and without SCs excitation. No feedback control of plasma position and plasma current was conducted. The timing of energizing SCs was set 1 ms after tokamak breakdown, and any other experimental conditions were identical. Figure 2 shows the plasma responses in the experiment mentioned above. The discharge duration prolonged as SCs current, $I_{\rm SC}$ increased. When $I_{\rm SC} = 1.9 \:\rm{kAturns}$, the discharge could be sustained until the iron-core was saturated. The plasma position measured with magnetic probes in Fig. 2 (c) shows that the vertical upward displacement vacuum vessel was suppressed as $I_{\rm SC}$ increases. The line integrated electron density measured on the equatorial plane decreases as vertical position of the plasma moves from the center of the vacuum vessel. When $I_{\rm SC} = 1.9 \:\rm{kAturns}$, however, the value fluctuated little, indicating that the plasma remained at the center of the vacuum vessel. In addition, the high-speed camera images in Fig. 3 also support the suppression of vertical displacement of the plasma with an increase in $I_{\rm SC}$. From the above results, it was clearly shown that SCs have the effect of suppressing the vertical displacement when $I_{\rm SC}$ is large enough, and that the displacement could be moderated even when the $I_{\rm SC}$ was small. We also confirmed that the $I_{\rm p}$ direction opposite to that of TFCs destabilizes the plasma position on the contrary. And our computation with VMEC shows that the toroidally averaged elongation ratio $\kappa_\rm{ave}$ is 1.1 without SCs and 1.2 with $I_{\rm SC} = 1.9 \:\rm{kAturns}$ in the cases of discharges shown in Figs. 2 and 3. 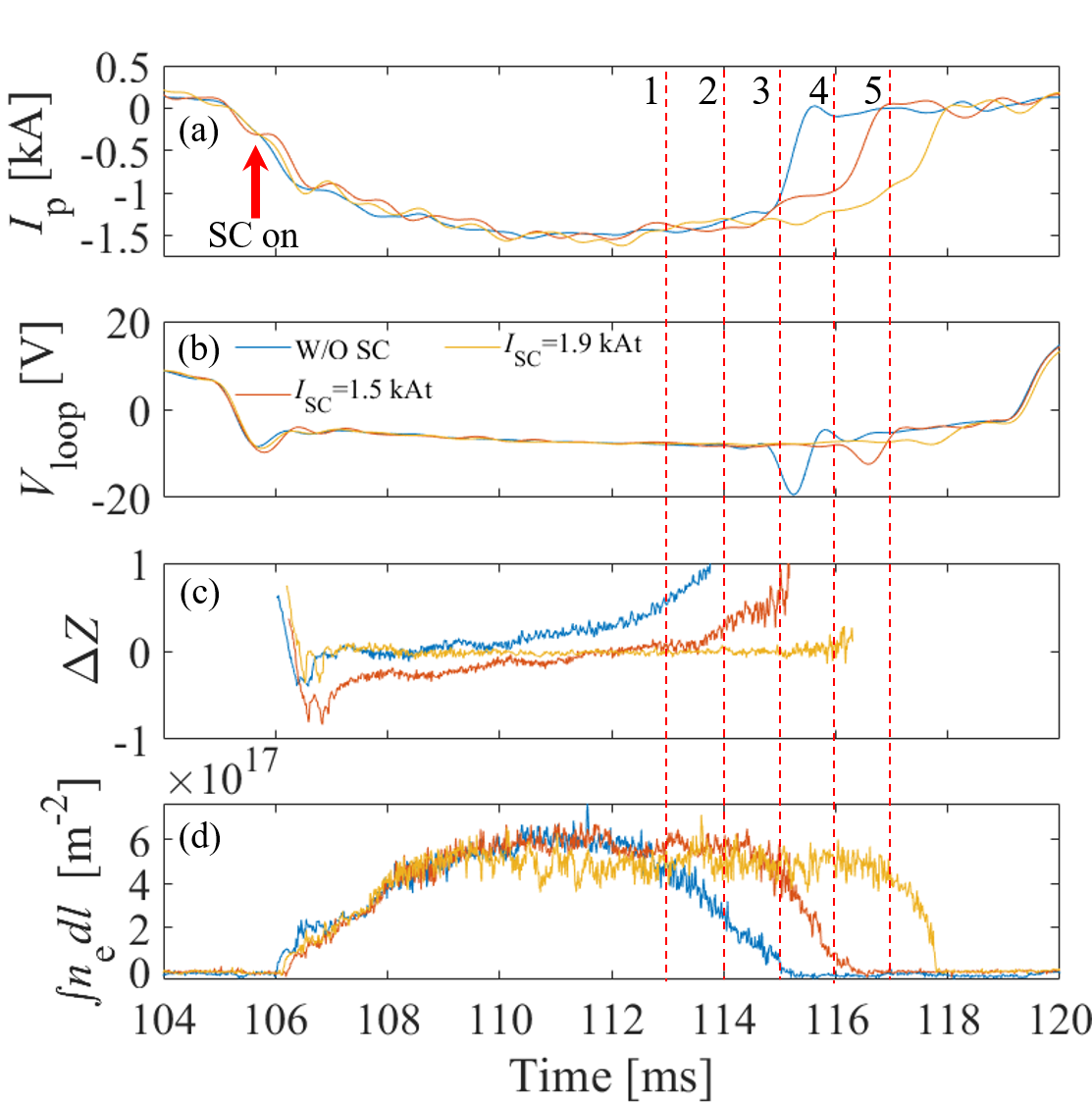 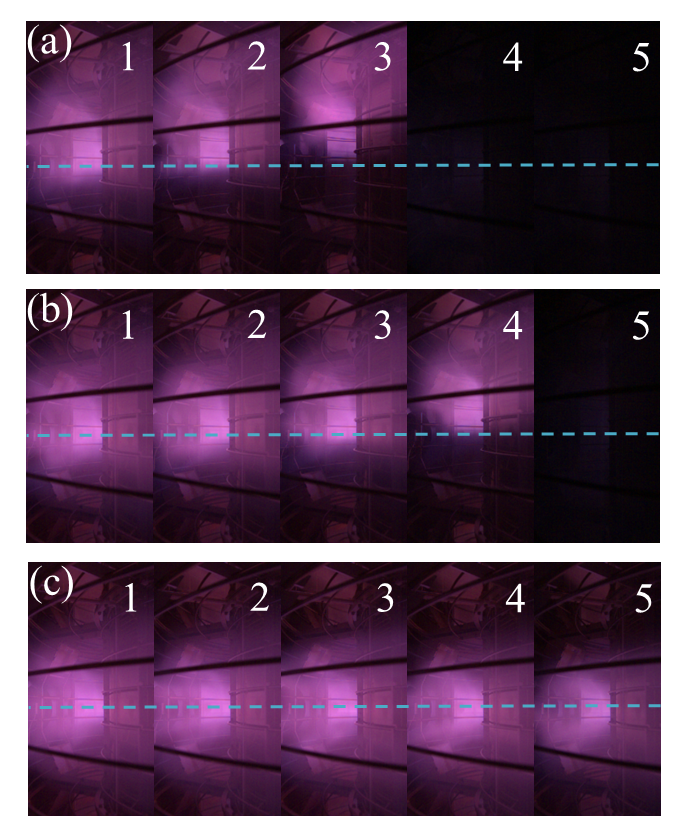