To resolve concerns for heat/electromagnetic loads from vertical displacement events (VDEs), we developed an equilibrium controller, which can predict and control VDEs to an arbitrary direction and allows us to cope with either upward or downward unmitigated VDEs. Here we improve the prediction rate by parameterizing a power supplies voltage saturation rate with a newly developed adaptive voltage allocation (AVA) scheme. Furthermore, the AVA also broadens accessible elongation ($\kappa_X$) by 4% (red dashed to green curve in Fig. 1) in the presence of power supplies voltage saturation due to hybrid plasma current ($I_p$) and shape/position control and unknown plasmas disturbances. In preparation for coming JT-60SA integrated commissioning, the VDE predictor and the AVA scheme are implemented in our equilibrium controller, and its performance is demonstrated by using MHD Equilibrium Control Simulator “MECS” [e.g.,$\sim$1].

Highly elongated plasmas are essential to achieve high fusion output in tokamak devices, while high $\kappa$ makes VDE control difficult. Once VDEs are triggered, which causes significant asymmetric heat loads on first walls and electromagnetic torques on conducting materials such as especially in ITER [2]. Although disruption prevention including VDEs has been extensively explored to reduce the disruption rate to achieve ITER requirements [3], it may still not be easy to mitigate all disruptions perfectly, because it requires forecasting disruptions before delay time of actuators such as control coils, gus-puff, and pellets, etc. In large superconducting devices such as ITER, DEMO, and JT-60SA, number of control coils is limited, and high inductance of each control coil causes saturation of power supply voltages to control coil currents. In the absence of in-vessel coils such as in DEMO and JT-60SA during the integrated commissioning, we should achieve hybrid control of $I_p$, plasma shapes, and VDEs in the presence of the voltage saturation. 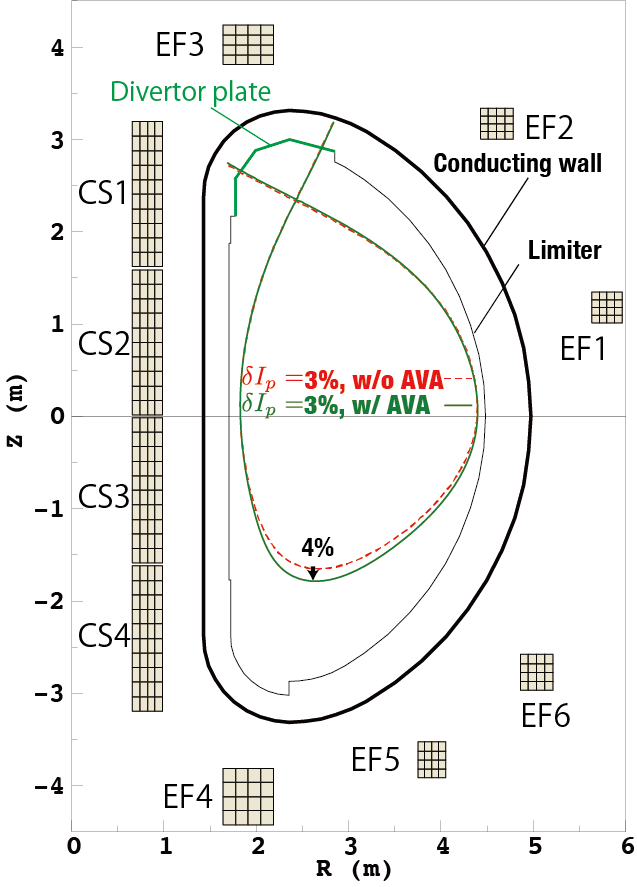 A novel VDE direction control algorithm is developed with the AVA scheme, which guides the VDE to an arbitrary direction and halves the concerns to protect the device from either upward or downward unmitigated VDEs, although the perfect mitigation/avoidance of VDEs is favorable. The typical VDEs detection and control behavior is shown in Fig. 2, where we assume 1% minor-collapse of total $I_p$, which is frequently observed in tokamak plasmas such as with magnetic islands. As shown in Fig. 2(a) and (b), the plasma vertically oscillates and finally a downward VDE takes place. Our controller detects this downward VDE at the timing shown by a filled circle in Fig. 2(c). After the detection, the downward VDE is controlled to the upward VDE by fixing coil currents. In JT-60SA, this downward to upward control is planned to protect lower walls from heat loads. As shown in Fig. 2(d), the $G_{\rm{S,AVA}}$ decreases towards the VDE, which is a powerful proxy for classification. 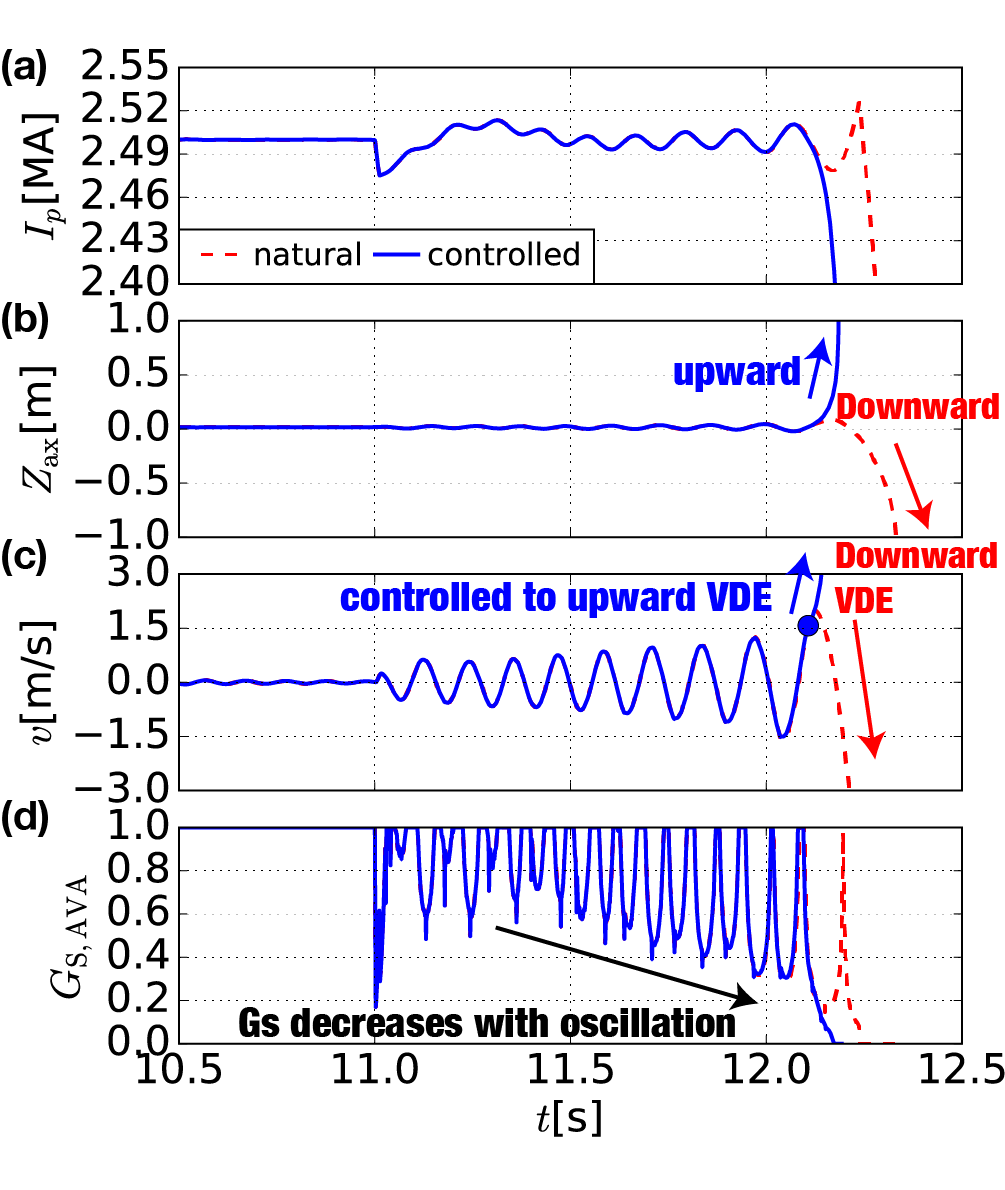 We developed the VDE predictor by a support vector machine (SVM) classifier with three parameters: the newly introduced $G_{\rm{S,AVA}}$, vertical velocity of current centroid $v$, and decay-index $n$, which is curvature of externally applied vertical field $B_z$ and defined by $-R_p/B_z\partial{B_z}/\partial{R_p}$ with a plasma major radius $R_p$. The stability is determined by the balance between the driving term and the suppression term from the controller, which is evaluated by $G_{\rm{S,AVA}}$. The $G_{\rm{S,AVA}}$ is newly adopted to evaluate the position/shape control performance in our SVM classifier, while the vertical velocity is a typical classification parameter [5], and the decay-index $n$ is a classical index for the VDE growth rate, where the more $n$ decreases, the more VDE growth rate increases. In Fig. 3, we control VDEs to opposite direction from Fig. 2, i.e., upward to downward. The classifier is trained by 17 simulation with 7 upward VDEs and 378/460747 trained/test data. The VDE predicted region is projected to ($n,v$) and ($n,G_{\rm{S,AVA}}$ ) plane as shown in Fig. 3(a) and (b). Here, the typical ramp-up scenario without VDEs are also shown by dot-points, which intersects the VDE predicted regions in Fig. 3(a). Thus, if we predict VDEs only by $n$ and $v$, which could cause many false alarms. On the other hand, by introducing the $G_{\rm{S,AVA}}$ as shown in Fig. 3(b), our SVM classifier successfully decouples the VDE predicted region from data without VDE, which perfectly eliminates the false alarms. Our equilibrium controller operates with ~100$\mu$s including the AVA scheme and the VDE prediction, which will satisfy the JT-60SA requirement. 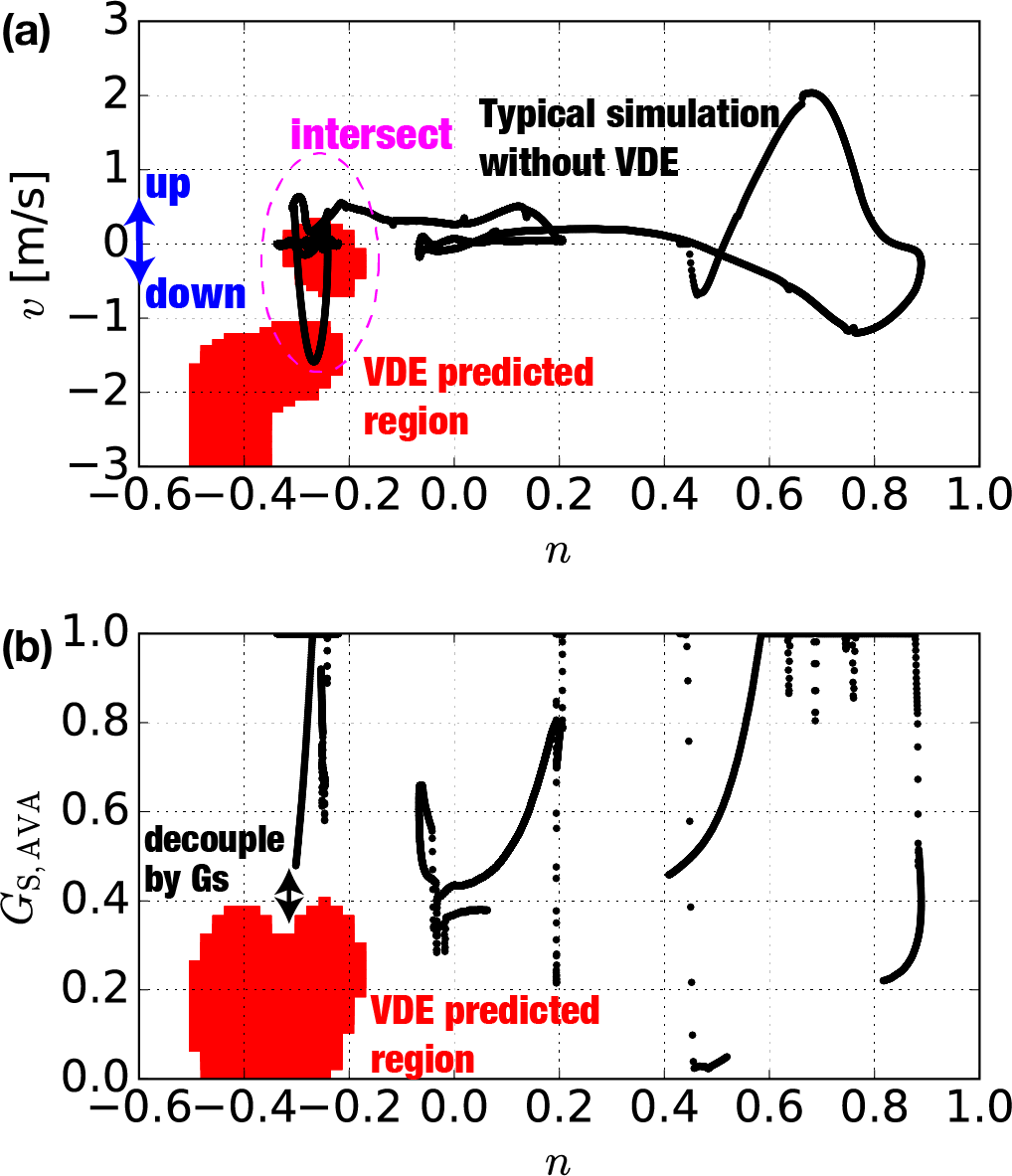 An accessible elongation ($\kappa_X$) is explored by also using MECS during the $I_p$ flat-top (2.5 MA) in the presence of $I_p$ minor-collapses, as shown in Fig. 4(a). Here, drops of $I_p$ are 0-3% of total $I_p$, which can be considered as a margin of the accessible $\kappa_X$ in the presence of accidental disturbances. An improvement of the controllability against the minor-collapses can be seen when the $\delta{I_p}$ is not less than 2%, and the accessible $\kappa_X$ increases by 4% from 1.55 to 1.61 in the 3% $I_p$ drop case (see also red dashed and green curves of Fig. 1). Detailed temporal behaviors of two cases with 3% $I_p$ drop, that are with/without AVA and indicated by arrows in Fig. 4(a), are compared in Fig. 4(b). A sudden minor-collapse occurs at $t=15~$s, and in the absence of AVA, the oscillation cannot be suppressed even with lower $\kappa_X$ in comparison with the AVA case as shown in Fig. 4(b2). In the case with AVA, after the minor-collapse, the $G_{\rm{X,AVA}}$ is automatically reduced to around 0.1 as shown in Fig. 4(b3), which improve the VDE controllability. After 16.5 s, the oscillation is successfully suppressed and the plasma reaches steady states. We note the AVA scheme also improves the controllability during $I_p$ ramp-up/down, $\beta$ collapse, etc. 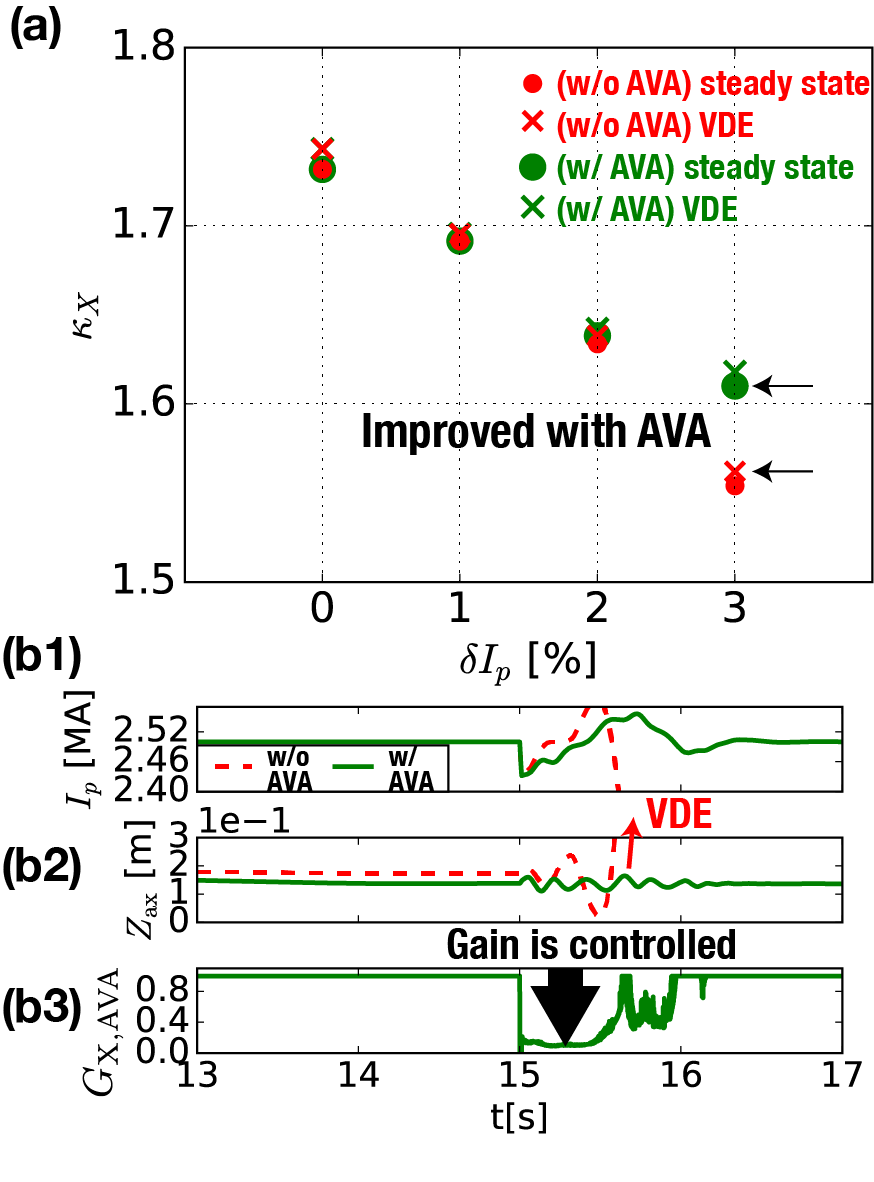