The Joint-Texas Experimental tokamak (J-TEXT), formerly named TEXT/TEXT-U in the University of Texas at Austin in USA, has been reconstructed and obtained the first plasma in the Huazhong University of Science and Technology in the spring of 20071. In J-TEXT tokamak, the upgraded resonant magnetic perturbation (RMP) system and the shattered pellet injection system were built, which allows flexible study of 3D effects and disruption mitigation in a tokamak2. At present, a typical J-TEXT discharge is a limiter configuration with three moveable poloidal rail limiter targets[3], which limits the extension of its research achievement to the advanced tokamak with a divertor configuration. At Austin, an inner poloidal divertor has been designed in TEXT for the interaction with the theoretical study of particle and energy studies in the H-mode[4]. Fortunately, the divertor windings are retained in the reconstructed J-TEXT and also the upgrade vacuum vessel for divertor. In order to upgrade the operation region of J-TEXT to the divertor configuration, and even H-mode, the recovery of the divertor system was put forward in 2016. Along with the establishment of divertor power supply, the construction of relevant diagnostics, and installation of the divertor target in high-field side, the divertor discharge has been tested from the end of 2018. And through the equilibrium calculation and position stability analysis, the control strategy has been evolved to be more stable.
Base on a series of preparations such as the divertor power supply, the divertor target and relevant diagnostics, the divertor configuration discharge has been realized for the first time in J-TEXT tokamak. There are two functional components of divertor windings: the divertor coils and the auxiliary bias coils. With different current direction in these coils, they can afford four baseline divertor configurations: middle single-null(MSN), double-null(DN), upper single-null(USN) and lower single-null(LSN), as shown in the figure 1. To realize these different configurations, the power system is designed as a four-quadrant operating power supply and the DV current has achieved 25kA with a flat top of 500ms. In order to handle the larger power in the future research, the inner chamber wall on the high-field side has been fully covered with tiles carefully aligned to toroidal symmetry.
With the help of the equilibrium EFIT code and spool model, both the equilibrium and the position instability have been analyzed. The result shows that, as a special baseline configuration with a divertor at the high-field side, the MSN case faces a serious in-out radial instability. Nevertheless, this kind of instability is not only relevant to the iron core but also to the equilibrium plasma position. The field decay index is closer to the stable region when the plasma is near the low field side. In the DV configuration experiment, the low-field limiter is moved outward firstly. Then in the discharge, the horizontal position(X) of plasma is pushed outward to 3cm away from the routine center of the limiter configuration step by step before the ramp-up of the DV current. Finally, according to the relevant diagnostics and an equilibrium flux distribution reconstruction, a controllable MSN divertor configuration is formed with a X-point at Z=0cm and R=26.6cm, 3cm away from the divertor target surface.
High density experiment and auxiliary heating experiment have been attempted in the divertor configuration. In the former, the central density of 3.8×10^19 "m" ^"-3" is achieved, which almost exceeds the Greenwald density without the consideration of the elongation. The MSN divertor configuration exhibits to be more stable in the density limit condition in this experiment. In the later, ECRH injection enhances the electron temperature and density, while more heat outflux is loaded on the divertor target tiles and causes intensive recycling and serious release of impurity, as shown in the figure 2.
The future plan of the divertor configuration discharge in J-TEXT tokamak includes three parts. The first part is to improve the ability to remain a stable DV configuration. A more reliable feedback control system is needed for the in-out radial instability. The compensation technology for the VF in the ramp-up phase of the DV current is being in our considering. And a comprehensive simulation is going to be designed and guide the optimization of the control parameters. The second part is the deeper investigation on the MSN configuration, especially the stable operation region, the confinement improvement and the transport in scraped-off layer(SOL). The disruption of density limit and related magnetohydrodynamic activity will be explored. The cooperation with ECRH and other auxiliary system will be carried out for the aim of enhancement of the confinement. Meanwhile, with the accessibility of J-TEXT, the turbulence transport evolution at the edge of plasma will be studied. The last but not least, the realization of other three baseline divertor configurations is on the way. A new biasing power supply would be test in the 2020 campaign. 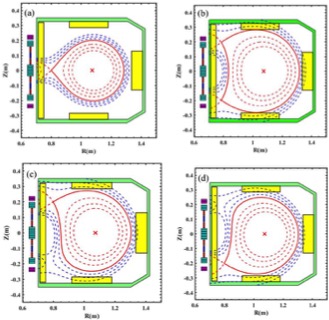 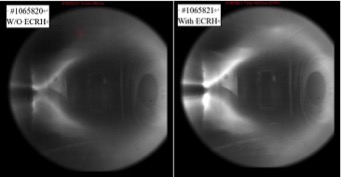