High-Temperature Superconducting (HTS) magnet is considered to be applied to the next-generation helical experimental device. Three types of large-current (6-18 kA) HTS conductors are being developed. One of the crucial requirements is to secure the high current density of 80 A/mm2 at a condition of 20 K temperature and 10 T magnetic field. In the first phase of the development, short samples of each conductor are being fabricated and tested in liquid nitrogen at 77 K with no external magnetic field. The observed critical current has been improving by optimizing the fabrication method, showing an extrapolation to satisfy the magnet requirement. Samples of the three conductors are also being fabricated to be tested at ~20 K and > 7 T. Quench protection is another crucial requirement, and the hot-spot temperature is examined with different protection scenarios for the three conductor options.
At National Institute for Fusion Science (NIFS), following the successful plasma confinement experiments conducted in the Large Helical Device (LHD), the post-LHD project is being discussed. One of its two candidates is to build a new LHD-similar but more optimized heliotron device having high magnetic field equipped with a HTS magnet system. Three candidate conductors named STARS (Stacked Tapes Assembled in Rigid Structure), FAIR (Friction Stir Welding (FSW), Aluminum alloy jacket, Indirect cooling, REBCO), and WISE (Wound and Impregnated Stacked Elastic tapes) are presently designed and developed.
The STARS conductor has been originally developed for the purpose of applying to the future helical fusion reactor FFHR-d1 [A, B]. In this conductor, REBCO HTS tapes are simply stacked in a copper stabilizer and stainless-steel (SS) jacket. A prototype sample (with SS jacket sustained by bolts) had achieved 100 kA at 20 K and 5.3 T [C]. A scaled-down conductor with a 18-kA operation current (Fig. 1(a)) is presently designed by applying laser beam welding (LBW) to the SS jacket. A preliminary testing of the laser beam welding has confirmed that the maximum temperature rise during the welding was ~40 degrees centigrade, which was well below the requirement of 200 degrees centigrade that guarantees no degradation of REBCO tapes. By having a flattened structure of the conductor cross-section, the helical winding property is supposed to be not very different from that of the NbTi/Cu conductor used for the present LHD, despite the enhanced mechanical strength using SS. The edgewise strain can be minimized to be almost zero by adjusting the inclination angle of the conductor in the winding package [D]. A 3-m-long straight conductor sample is being fabricated, which will be tested in March 2020 at 77 K and 0 T.
The FAIR conductor (Fig. 1(b)) has a stack of REBCO tapes imbedded in a circular aluminum-alloy jacket which is sealed by FSW [E]. A slight twisting (2 rotations per meter) is included to have uniform current distribution among REBCO tapes. A number of 1-m-long prototype samples have been fabricated and tested at 77 K, 0 T. Though some degradation was initially observed with the measured critical current by cyclic excitations, steady improvement is foreseen by optimizing the fabrication process, as is shown in Fig. 2.
The WISE conductor (Fig. 1(c)) is formed by inserting a stack of REBCO tapes into a flexible metal tube, and the winding package is impregnated with low-melting point metal alloy U-Alloy78 (melting point: ~78.8 degrees centigrade) [F]. A small solenoid coil was fabricated and 0.16 T was achieved with 800 A conductor current in liquid nitrogen. Although normal-transitions were observed from some tapes, the coil was stably excited. The reason is being investigated by testing short samples. A small helical coil was also fabricated by winding the WISE conductor into a helical coil-can which was fabricated by additive manufacturing. 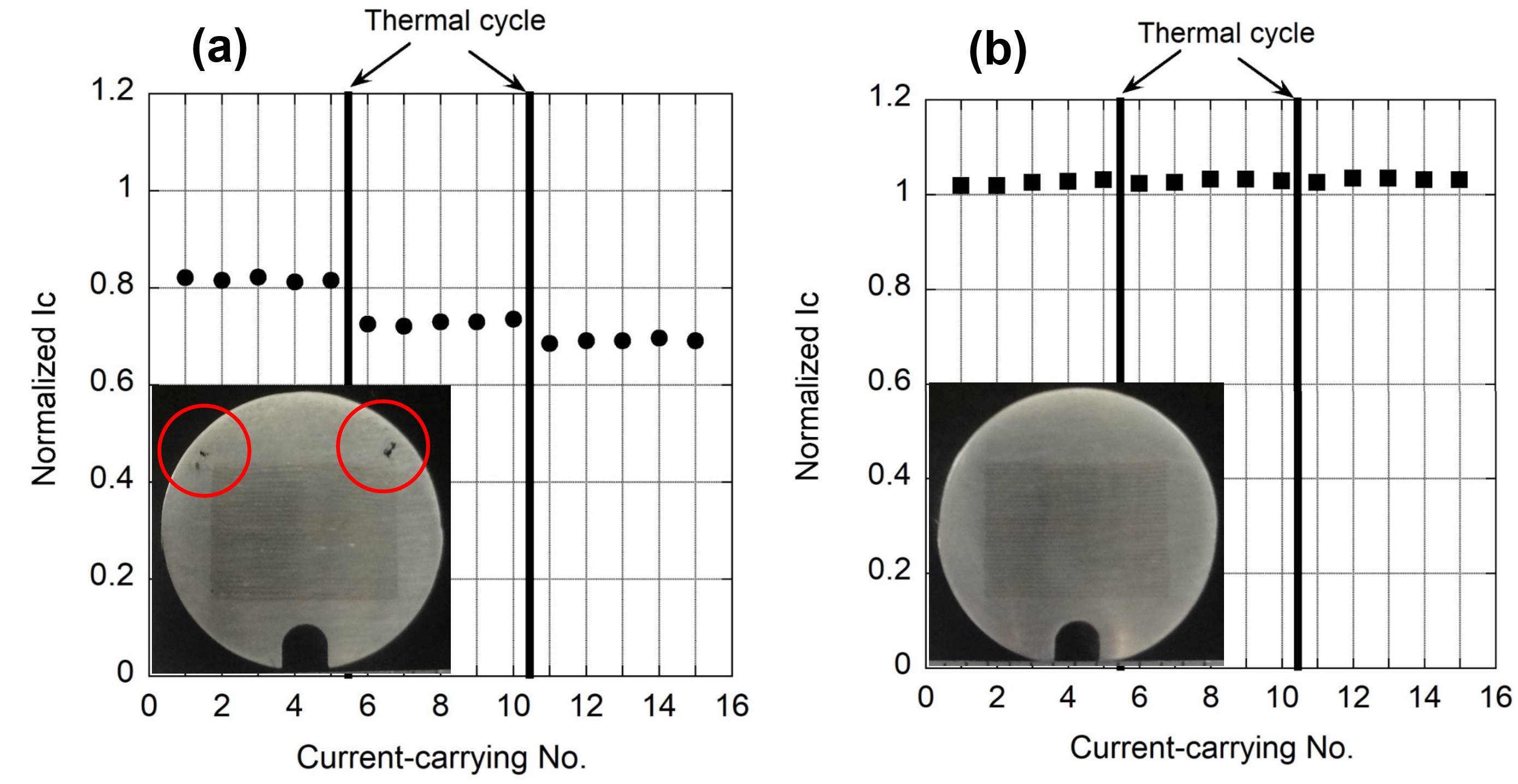 The major specifications of the three conductors are summarized in TABLE 1. For all these three conductors, after having completed the present tests in liquid nitrogen and no external magnetic field, short samples will then be tested in the superconductor testing facilities under high magnetic field (>7 T) and cryogenic temperature (4-50 K). Resultantly, some suitable conductors will be selected to go into the next phase of long-conductor development also by manufacturing model coils.
The quench protection is another crucial issue for the HTS magnet design. The STARS conductor employs the conventional dump resistor method with a short discharging time constant of <3 s to limit the hot-spot temperature to <200 K. Since the aluminum-alloy in the FAIR conductor possesses less heat capacity, a secondary winding is imbedded in the conductor to be used as a heater for enhancing normal-zone propagation. The feasibility of this option is being examined through numerical simulations. The WISE conductor is wound as a Non-Insulation (NI) coil, which is supposed to have self-protection capability. The feasibility of this option is also being examined through numerical simulations. The fabrication method of the helical coils is also examined. In addition to the continuous winding technique employed for the present LHD, the “joint-winding” method associated with a bridge-type mechanical lap joint technique has been developed for the STARS conductor [G].