Good vacuum health of any fusion machine is a stringent requirement for a quality plasma discharge. A pumping system of a fusion machine has to remove the gas load during two scenarios efficiently: the first one involves preparing the machine by baking of vessel and plasma-facing components to ~150 degree C to 200 degree C to achieve base vacuum level of < 1 E-8 mbar and the other is during plasma operation. The gas load during the baking process mainly comprises water vapor, nitrogen, Co, and during plasma operation, it is Helium and hydrogen isotopes.

To address the two requirements, a liquid nitrogen-based and liquid helium based cryopump development was undertaken at the Institute for Plasma Research, India. Both the pumps are capture pumps and use coconut shell charcoal as sorbent. The novel aspect of both kinds of pumps is the use of highly microporous activated coconut shell charcoal with pore size < 2 nm [1., 2.]. Optimized thickness of the adhesive coating was used. An epoxy-based adhesive, which is thermally conducting, vacuum compatible with low outgassing rate, and able to withstand thermal cycling, was developed for the purpose [3.,4.]. The charcoal bonded with the metal plate can withstand 150 degree C, and this helps in quality regeneration removing the gases clogged in pores. Generally, commercial cryopumps are baked up to 50 degree C. The developed pumps are portable liquid cryogen based pump having no moving parts, and hence requires less maintenance. Fig 1(a) shows the adsorption and desorption isotherms of the activated charcoal granule and desorption part is reversible in nature. The type of isotherm relates to microspores nature of coconut shell charcoal. Fig 1(b) shows the pores surface area of ~ (1400 ±5 %) m2/g at LN2 temperature (using BET method). 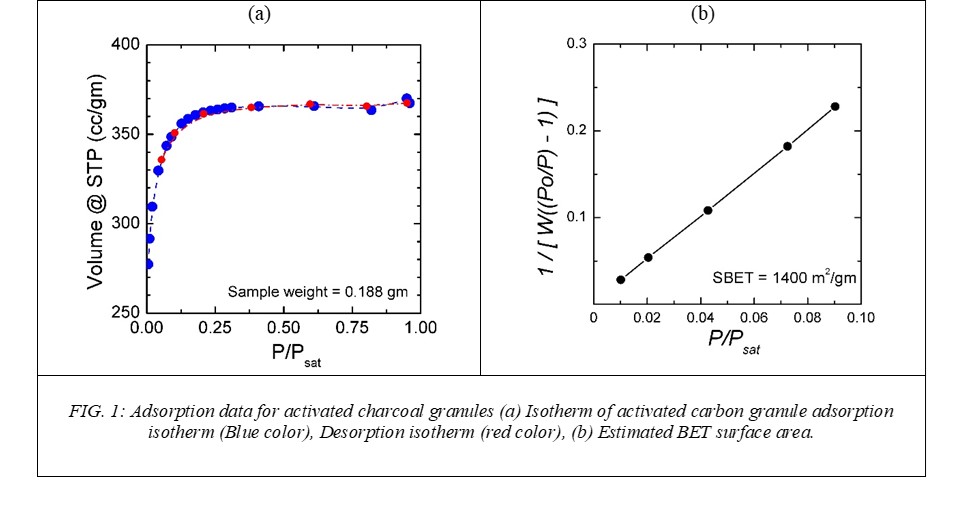 Liquid Nitrogen-based pump can provide a solution to evacuate large gas loads in a fusion machine during its preparation targeting achieving base vacuum. During the process of pumping, when the pressure level is in the range of < 1E-5 mbar, water desorption from the surfaces under vacuum takes place along with other gases like Nitrogen, and it hinders achieving the UHV level. Commercial cryopumps operating at ~20 K are generally used during the process. The developed concept of a bath kind of cryopump with cryopanels coated with coconut shell charcoal can pump Nitrogen at liquid nitrogen temperature apart from water vapor. It provides an easy and economical solution to handle immense gas load released during baking of components in a fusion machine. The pump comprises a liquid nitrogen bath with attached conical cryopanels of copper, forming a pine tree kind of structure and are conduction-cooled. The surface area of the panels is 0.7 m2. Fig.2 shows the pumping speed found on an experimental set up as per American vacuum society ( AVS) standard is > 4500 l/s at a throughput of 1 E-2 mbar l/s for continuous pumping mode of > 50 hours. 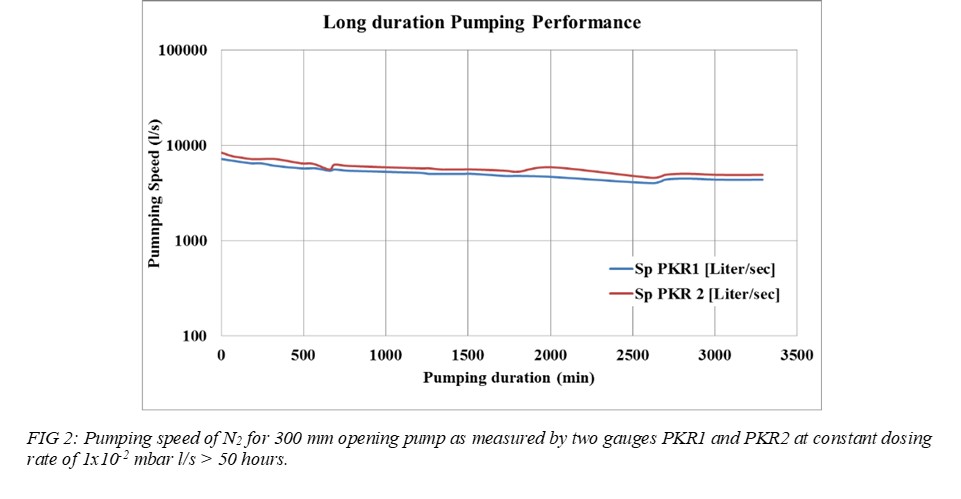 The results are discussed in detail in this paper. The results of the prototype led to the design of cryoadsorption cryopump, which can find application in a fusion machine to handle gas load during baking process. The design parameters target the pumping speed of > 14000 l/s for Nitrogen and 20,000 l/s for water vapour. It is a 500 mm opening pump. Fig.3 shows the design of this pump and it is discussed in this paper. Simulation of the experimental set up was carried out using Molflow analysis (Ref-5). Results of simulation and experiment are discussed in the paper. The concept with a large number of cryopanels and thus large surface areas to pump hydrogen and helium provides a solution to handle the considerable gas load during plasma operation. 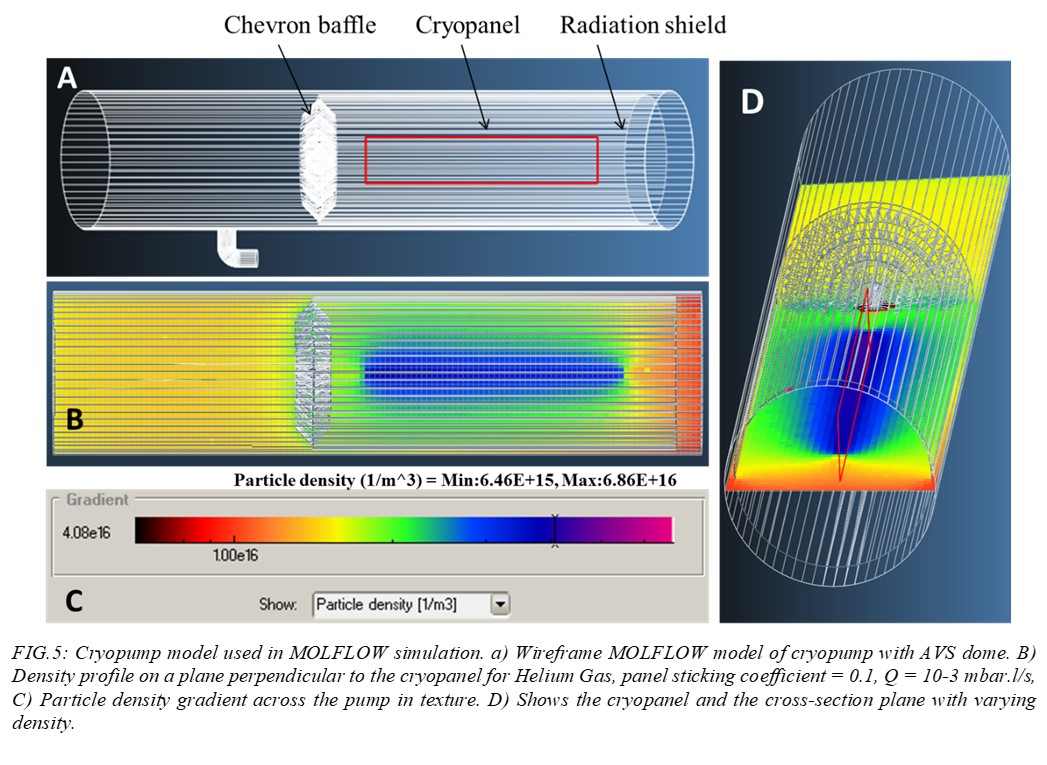 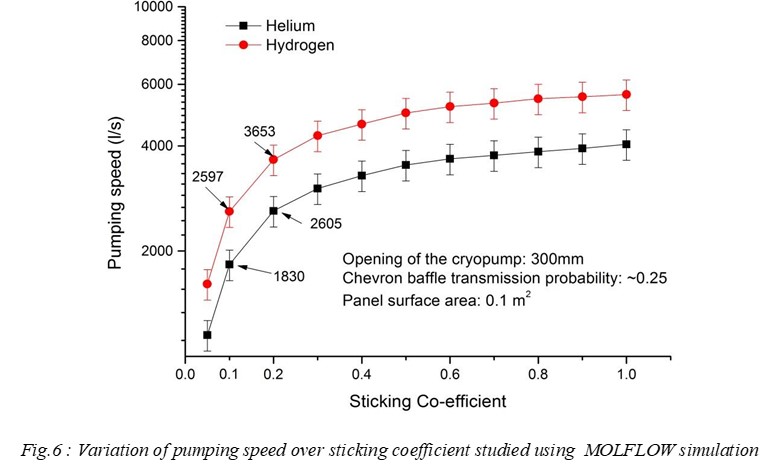