The electrochemical technique is shown to be effective to develop liquid blanket system, not only for the molten salt one but also for the liquid metal ones. (i)Oxygen impurity in lead lithium eutectic alloy was removed as CO2 gas by electrolysis in the molten salt contacting with the liquid metal, as well as (ii)nitrogen impurity in liquid lithium. Considering the electrochemical compatibility of lithium alloy and salts, (iii)new liquid blanket system, lead lithium intermetallic compound / chloride molten salt blanket system, is also proposed and its basic characteristics are investigated.
In order to realize a liquid blanket, it is important to develop purification systems including the detritiation system and to clarify and control corrosion behavior. These are basically required for any liquid breeding material candidate, lithium, lead-lithium eutectic alloy, or molten salt. In the research on fluoride molten salts, such as FLiBe, removal of impurities and recovery of tritium using electrochemical methods, including redox control, have been widely performed. As well as those of FLiBe, those of liquid tritium breeding metals can be solved using molten salts. In this research, electrochemical removal of nitrogen impurity in liquid lithium and oxygen in lead-lithium eutectic alloy, both of them are very important form the viewpoint of corrosion reduction, are focused. Furthermore, a new liquid blanket system, Li-Pb intermetallic compound with chloride molten salt, is proposed considering its electrochemical characteristics.

1. Removal of oxygen impurities from lead-lithium eutectic alloy
Oxygen impurity in lead-lithium eutectic alloy has negative effect in terms of corrosion to structural materials and deterioration of functional materials. The cold trapping method -removal of precipitates in cooled section- or the hot trapping method -reaction with much stronger oxide forming material- can be used, though the achievable concentration level or the difficulty in continuous processing are inevitable. However thermodynamically, oxygen impurity in the eutectic alloy is expected to be distributed to the molten salt as lithium oxide when the alloy is in contact with molten salts. The lithium oxide in molten salts can be removed from the system by electrolysis as well as the reduction of lithium which is fed back to the alloy. In our research, cyclic-voltammetry (CV) measurement was performed in the eutectic chloride molten salt LiCl-KCl contacting with the liquid eutectic alloy using a glassy-carbon electrode (Fig.1). The change of CV was obtained when oxygen impurity was directory fed into the liquid alloy as shown in Fig.2 through the tube 6 in Fig.1. In addition, the weight loss of the carbon electrode during the continuous electrolysis was equivalent to the value calculated from the amount of charge assuming the formation of CO2 gas. Based on these results, this electrochemical method is show to be effective for the removal of oxygen impurity from eutectic alloys. 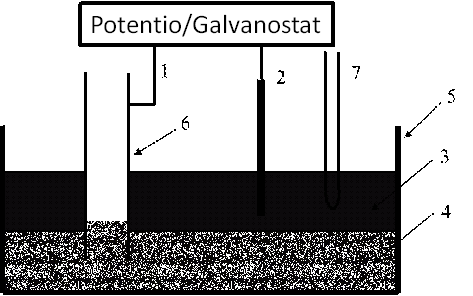 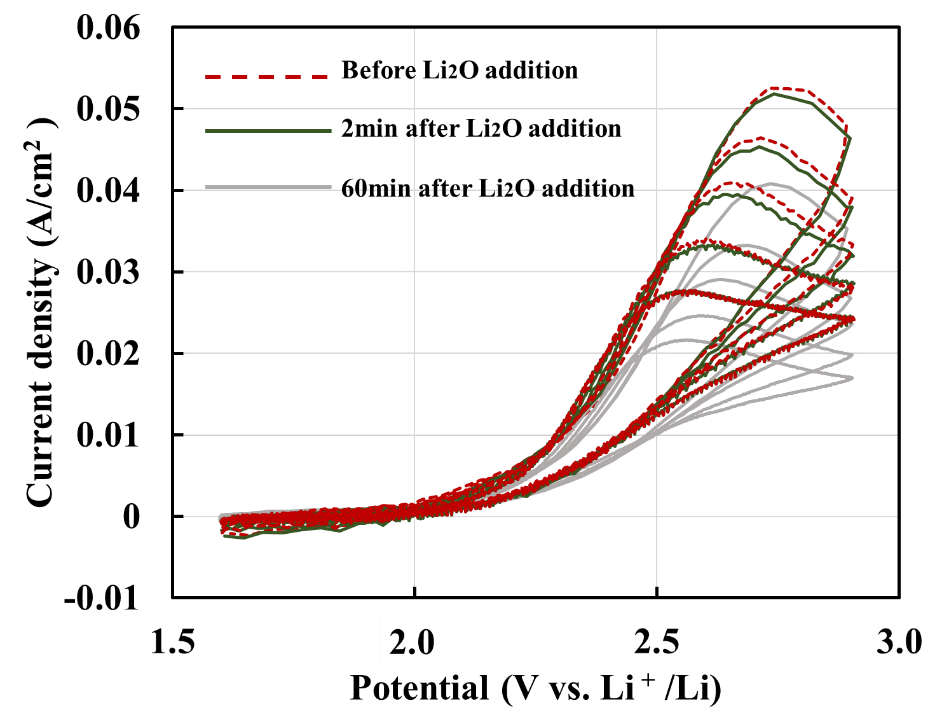 2. Removal of nitrogen impurities from lithium
It is known that lithium has a specific reactivity with nitrogen unlike other alkali metals, and nitrogen in lithium is reported to degrade the compatibility with structural materials and the tritium trapping material such as yttrium. Several investigations have been done to remove nitrogen in lithium using titanium or titanium-containing alloys, but the method requires high reaction temperature and replacement of nitrogen trapping materials. The recovery of hydrogen from lithium in contact with molten salts has been studied in the United States in the 1980s, and the similar method is applicable to the removable of nitrogen. The method have advantages such as low-temperature operation of about 673K and the possibility of continuous operation. In our research, the CV change of a nickel electrode in LiCl-KCl salt contacting with liquid lithium is obtained, as shown in Fig. 3, which indicates that nitrogen impurity in lithium can also be electrochemically removed. 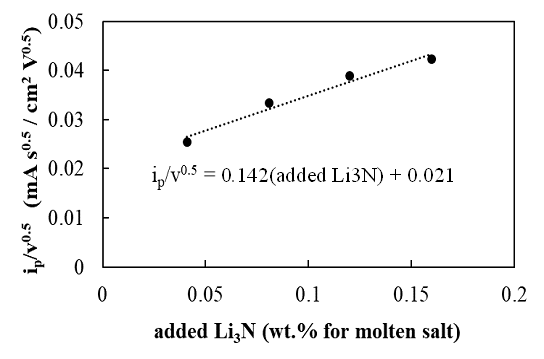 Figure 3. Proportional relationship between the gradient of CV and added Li3N. The current is increased as nitrogen impurity is added to lithium to be removed through electrolysis [B]

3. Lead lithium intermetallic compound / chloride molten salt blanket
The lead and lithium alloy system is known to have high melting point intermetallic compound phases at around 75 at% lithium concentration. Although those are kinds of solid breeding materials, it is considered difficult to recover tritium by gas sweep due to the high lithium activity. However, it can be inferred from the example of lithium that the molten salt contacting with Li-Pb compound will contain LiT distributed from Li-Pb phase when tritium is generated. Here, as a molten salt, BeF2-based salts, such as FLiBe and FLiNaBe, usually considered as a candidate blanket material is not suitable because of the reactivity with lithium in the Li-Pb compound. In contrast, a molten salt such as LiCl-KCl is suitable because of the compatibility to the Li-Pb compound. In this case, the Li-Pb compound acts as an electrochemical redox controller (reduction of TCl), as metal Be in fluoride salt, and has a certain neutron multiplication effect and a long-life breeding material due to the high lithium concentration. TBR of the Li-Pb compound / chloride salt system varies depending on the isotope enrichment ratio of lithium and chlorine, volume fraction, etc., but is calculated to be 1.1 or more in some cases. The concept of an electrochemical impurity treatment system is being studied based on experimental data.

To realize the liquid breeder blanket system, the electrochemical method is shown to be effective not only for the fluoride molten salt system, which has been focused on, but for liquid metal blanket systems such as lead-lithium eutectic alloy and liquid lithium.