Blanket is one of the most important components of the China Fusion Engineering Test Reactor (CFETR). The preliminary design has been completed with a thin tungsten tiles armored first wall (FW) on reduced activation ferritic/martensitic (RAFM) steel substrate with helium cooling to withstand the surface heat load. R&Ds for their diffusion bonding have been carried out, aiming at high strength and ductile joints. Various low activation pure metals as stress accommodation and isolating interlayers were investigated. Joints with 0.5 mm thick Fe interlayer showed stable bonding strength higher than 230 MPa in shear test. The formation of Fe2W phases were suppressed by lowering the diffusion temperature for better ductility joints. Manufacturing FW mock-ups achieved no interfacial defects. Their thermal fatigue performances are evaluated by high heat flux test at 1 MW/m2 for 1000 cycles.
The preliminary design of the CFETR blanket is shown in Fig. 1. First wall (FW) in the front of the blanket acts as a thermal shield to protect the components behind. It shall be tolerable to high surface heat load and strong neutron irradiation. The first wall consists of W armor (plasma facing material) and RAFM-steel (structural material). The scale of W armor is about 2m×1.2m with a thickness of ~2mm. Rectangular cooling channels are in the RAFM-steel substrate. The average heat load on the first wall surface is 0.5 MW/m2, and the maximum is 1 MW/m2. For efficient heat transfer from W surface to its helium coolant, it requires metallurgical bonding between W and RAFM-steel in large scale. Based on the successful fabrication of ITER Be/Cu first wall, hot isostatic pressing (HIP) diffusion bonding was employed to join W tiles to RAFM-steel. At present, joints with high bonding strength and ductility were obtained, defect-free mock-ups were fabricated. 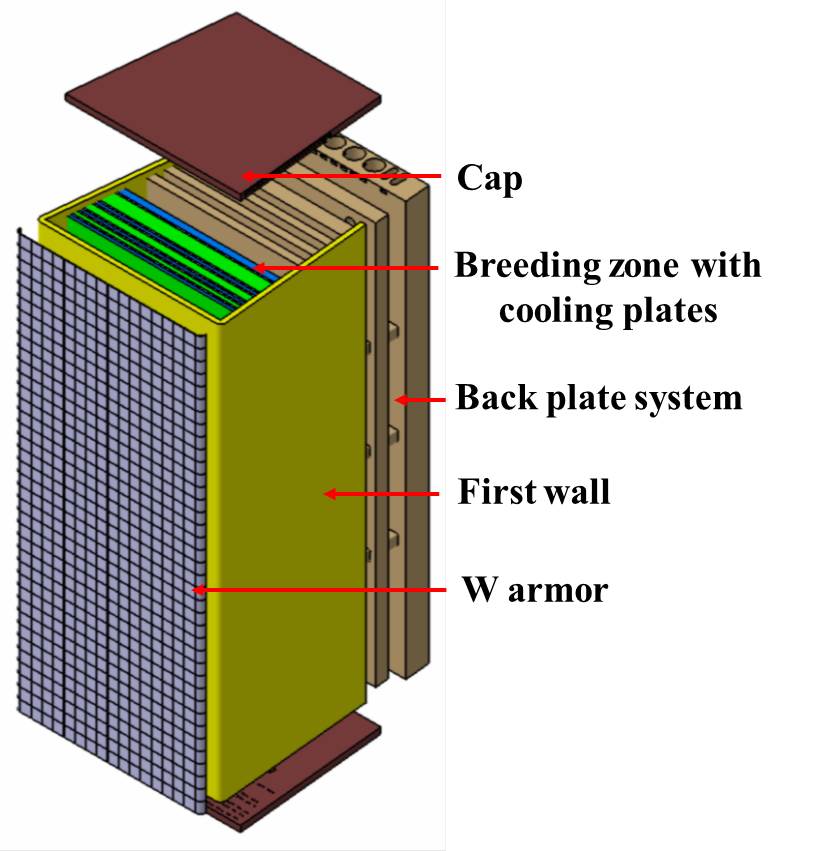 The key of W/RAFM-steel diffusion bonding is to use a low activation and soft interlayer to accommodate the large thermal stress induced by temperature gradient and their large difference in coefficient of expansion. W/RAFM-steel joints with high bonding strength were obtained using V and Ti interlayer [ 1–3 ]. However, thermal conductivities of V and Ti are much lower than that of the RAFM-steel, which may hinder the heat transition at the interface. Fe interlayer shows great advantages in both thermal conductivity and compatibility with RAFM-steel. But few is researched because it is easy to form brittle Fe-W intermetallic phases with W. Two methods were utilized to suppress their formation in present study.
One is using Cr and Ti coatings (10μm) to block the inter-diffusion of Fe and W. Ti coating successfully blocked the inter-diffusion and a shear strength of 90MPa was obtained for the joints. Cr coating failed in blocking, ternary intermetallic was formed and the joints were quite fragile.
The other is bonding at low temperatures to reduce the growth rate of the intermetallics. Two bonding experiments was carried out at 800℃/150MPa/180min and 980℃/150MPa/60min for comparison. No obvious reaction layer was observed at W/Fe interface for the joints prepared at 800℃ while a 1-2 μm thick Fe2W layer was formed for the joints prepared at 980℃. The former joints presented high bonding strength (＞230MPa) and excellent ductility when subjected to shear test at room temperature. But their shear performances were not stable, which may due to locally insufficient inter-diffusion. It was found that the later joints also presented high shear strength of more than 240MPa. Further research revealed that the reaction layer was a Fe-rich Fe2W type phase, which could release interfacial thermal stress though a stress-induced martensitic transition .
To further optimize the bonding process, more bonding experiments were carried out at 850℃, 900℃ and 950℃ for 60min, 135min and 240min. The results showed that all joints presented high bonding strength and ductility in shear test at room temperature (Fig. 2). More importantly, the joints prepared at 850℃ and 900℃ fractured at Fe/RAFM-steel joints in ductile mode. It demonstrates that reliable bonding of W/Fe/RAFM-steel can be obtained within a wide HIP parameter range.

Two W/Fe/RAFM-steel FW mock-ups were designed and manufactured for high heat flux test (HHFT) to evaluate their thermal fatigue performances. The RAFM-steel bases were 256mm×106mm×25mm in size, and Fe interlayers were 0.5mm in thickness. Large W tiles (50mm×50mm×3mm) were joined to the RAFM-steel bases by HIP at 850℃/150MPa/135min. Gaps with 0.5mm width and 3mm depth were machined between W tiles after the bonding. No defects were detected at both bonding interface by ultrasonic inspection (Fig.3).

HHFT for the mock-ups will be carried out in an electron beam facility of SWIP (EMS-400). The preliminary parameter will be 1MW/m2 and 1000 cycles (15s on and 15s off). The test result will be presented soon.