Here we report the result of validation of tritium recovery system for liquid PbLi breeding blanket with Vacuum Sieve Tray (VST), that is a tritium extraction from multiple droplets under a vacuum. The VST device is installed in Oroshhi-2 PbLi test loop at the National Institute for Fusion Science (NIFS) in 2019 followed by further modification, and the performance and reliability of the process is demonstrated in 24h continuous operation.

Liquid PbLi is expected as a candidate breeder for ITER-TBM and DEMO. Based on successful proof-of-principle (PoP) study, VST development is in engineering demonstration / maturity phase, while various other extraction methods are in PoP phase. The authors have previously reported that droplets of PbLi show approximately 200 times faster tritium transport that assists the tritium extraction significantly. Key issues are a) possible performance degradation by the dense distribution of multiple nozzle arrays, b) performance verification in continuous operation and risk of degradation in long term operation. To solve these issues, following targets are established and experimental campaigns are in progress.
1) The Tritium Extraction Efficiency (TEE) verification. The authors previously reported the estimated TEE as shown in Fig. 1 [A]. A TEE greater than 80% is the target of this campaign as a typical requirement for such as EU-DEMO.
2) The multiple nozzle effects verification. Previous estimation of TEE is obtained under one nozzle column that may not be extrapolated to multiple droplets. Conservative analysis suggested that the TEE under multiple nozzles might be 20% to 60% of that of the one-column condition [B].
3) Reliable operation without TEE degradation and unexpected stability problems. Regarding the reliable operation, this campaign selected at least one day as the minimum target. 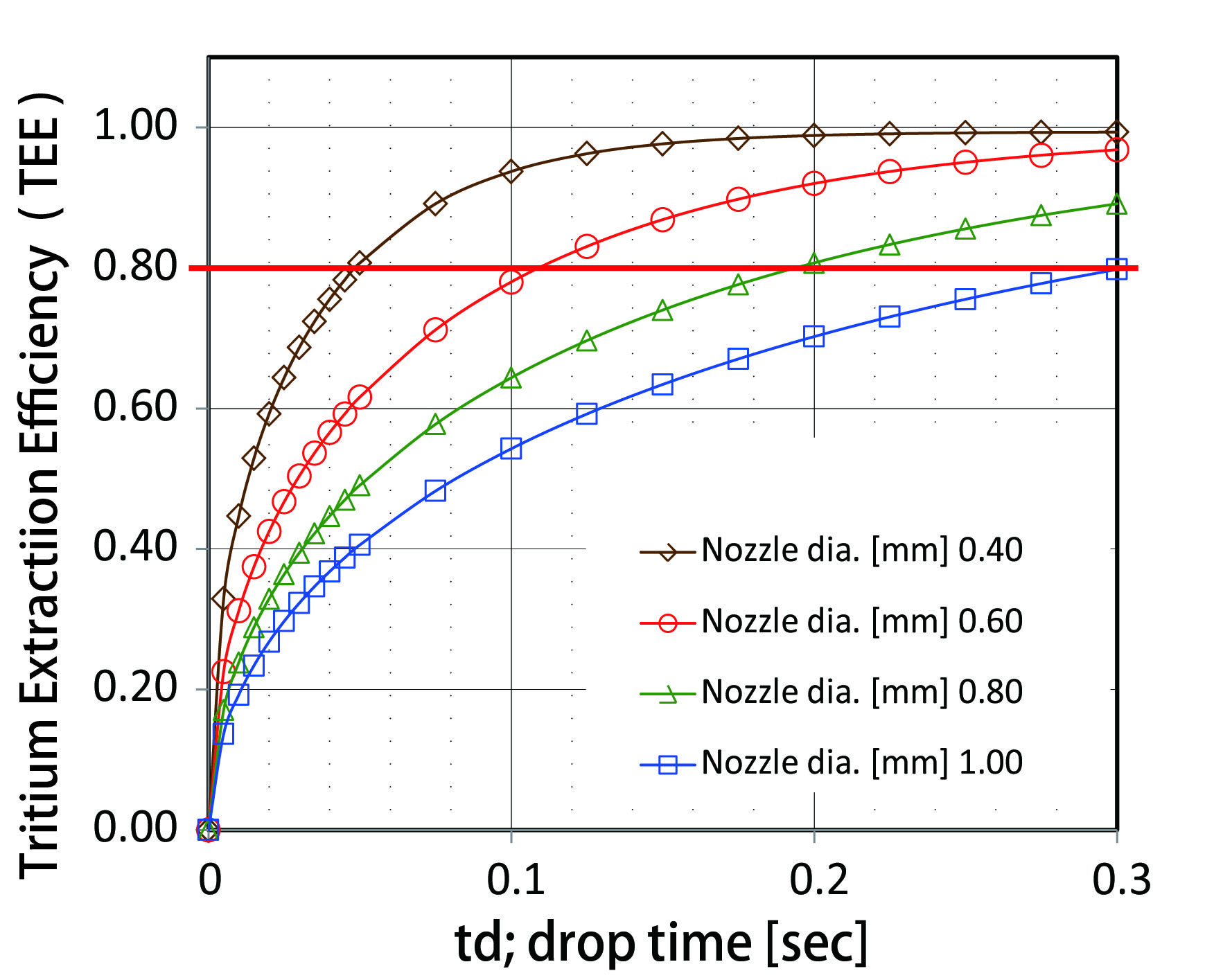 A multi-nozzle experimental setup, shown in Fig. 2, is designed to have a DEMO relevant extraction efficiency of 80 % with the falling height of 0.5 m. The numbers of PbLi nozzle, 7 and 19, are approximately one thousandth of that of DEMO WCLL loop. It was, as shown in Fig 2, fabricated and integrated into the Oroshhi-2 PbLi test loop at NIFS which has competent capacity for this purpose. Experimental campaign is performed by the following procedures.
1) TEE is measured by comparing the difference in deuterium concentration in PbLi, Cin and Cout, as TEE ≡ (Cin – Cout)/Cin. To validate the results, the mass balance between Q(Cin-Cout) and Jext, mass flow of the dissolved gas, are measured. Experiments with the nozzle diameters of 0.6 mm and 1.0 mm and the falling period of 0.1 and 0.25 s are performed. 2) Continuous operation is monitored by TEE transition. 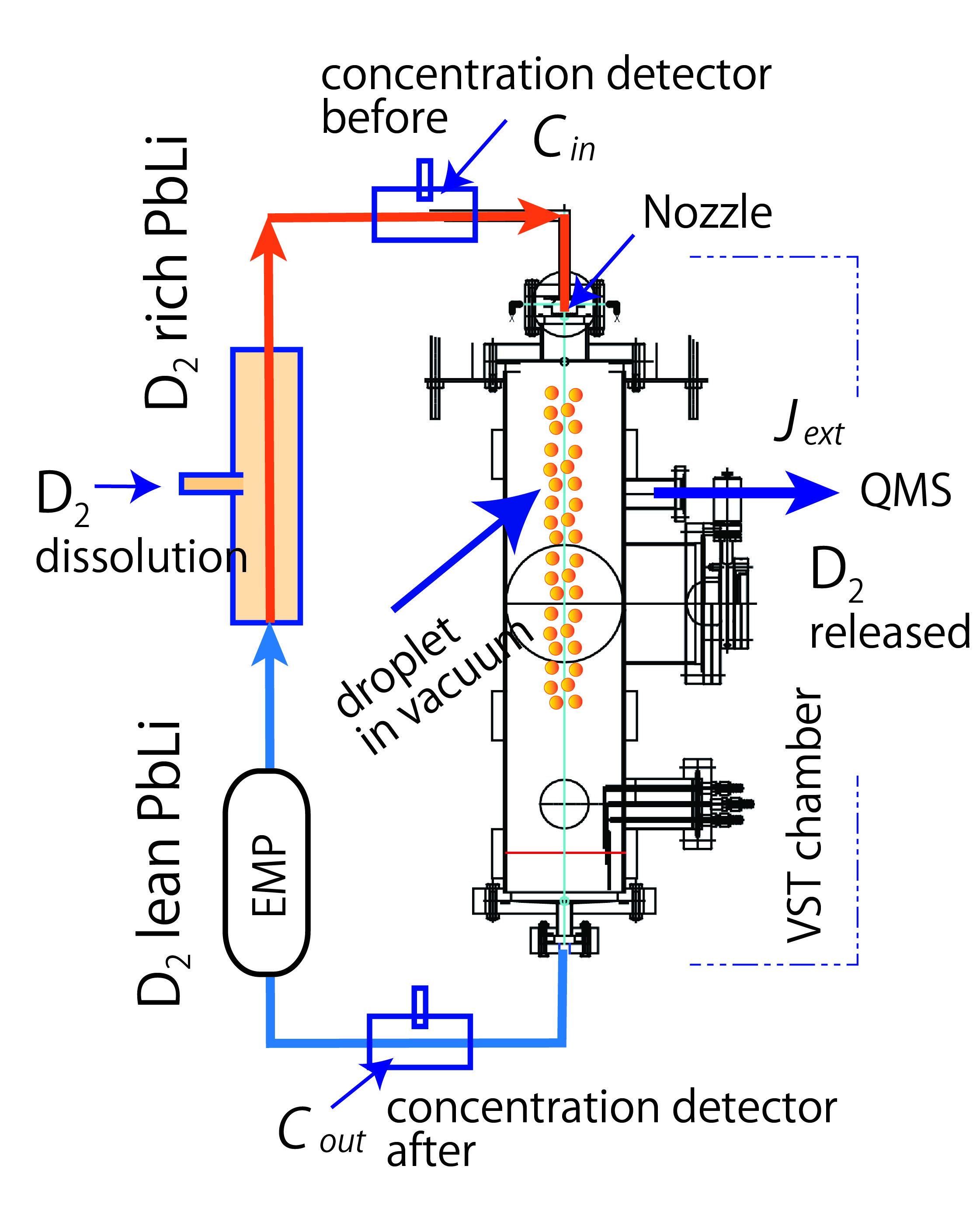 As shown in Fig. 3, a first stage of multi-nozzle VST trial is performed. The pressures of extracted deuterium (D2) gas as the function of two different falling periods, t1 and t2, are consecutively measured with four nozzles setup.
The pressures of extracted D2 gas are P1 at the falling period of t1, and P2 at t2, respectively. Background gas pressure is assumed as P0 at before falling. The pressure ratio (P2-P0)/(P1-P0) identifies the mass transfer coefficient of the VST by comparing the theoretical TEEs at t1 and t2 in Fig. 1.
The obtained ratio is 1.9±0.3, whereas Fig. 1 reads 1.8. This is, however, a preliminary value and too early for analyzing a result. More experiments with multiple parameters must be performed, which are underway now.
By this campaign the viability of VST for ITER TBM, as well as DEMO liquid PbLi blanket will be evaluated. 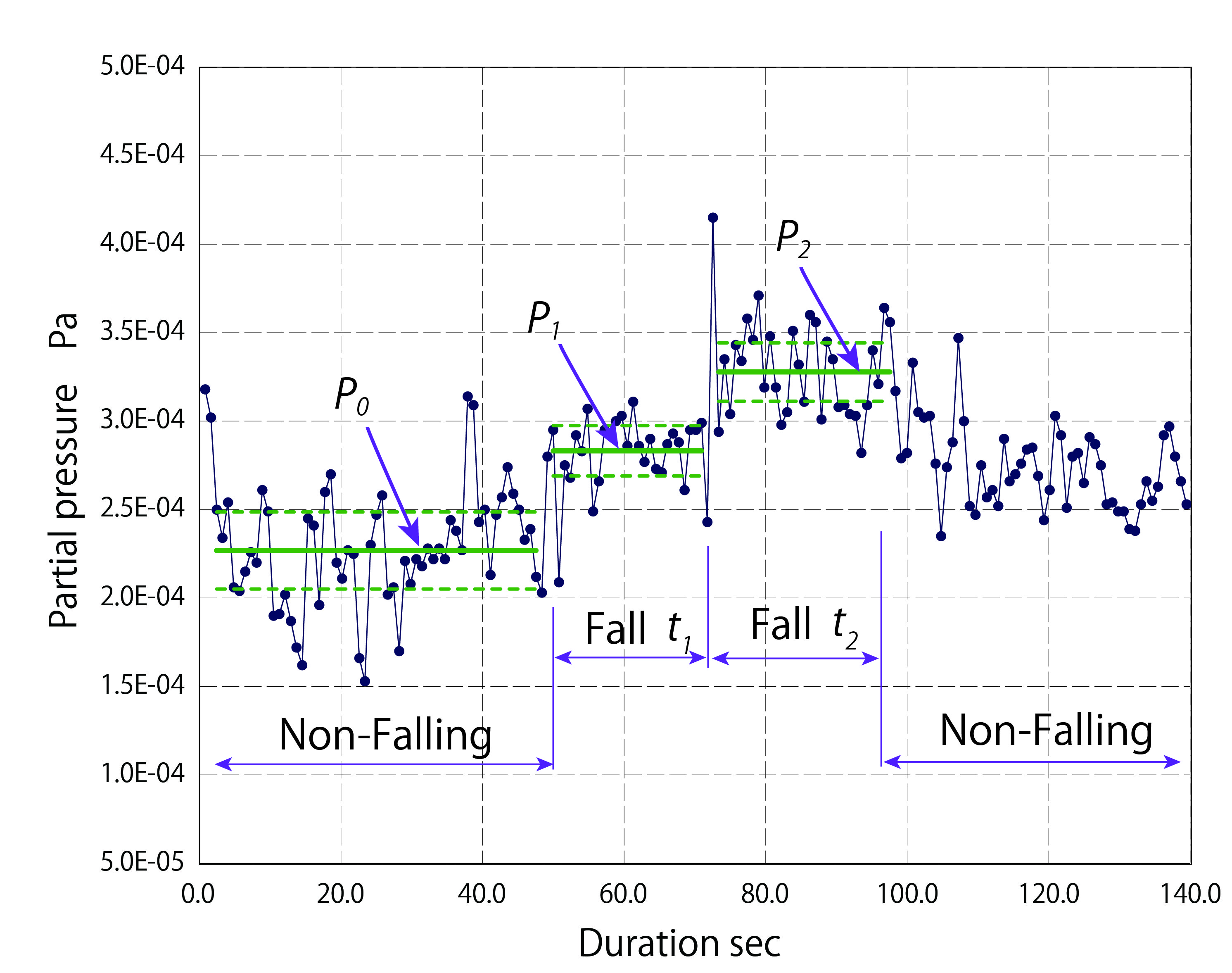