The Gas Dynamic Multimirror Trap (GDMT) project represents a next step for research of magnetic plasma confinement in linear axisymmetric systems led by the Budker Institute of Nuclear Physics (BINP). The project’s goal is to assess the feasibility and demonstrate the maturity of the gasdynamic mirror concept for various practical fusion applications ranging from volumetric neutron sources for fusion material tests [1,2] and subcritical hybrid reactor drivers [3] to the power-generating fusion reactors running on advanced weakly activating types of fuel: D-D, D-He³ and p-B¹¹. Among the strong arguments in favor of pursuing this approach are the simplicity of the magnet system, inherently steady state operation without large plasma currents, easy management of plasma heat and particle exhaust, efficient utilization of the confining magnetic field with experimentally demonstrated values of β = 0.6 in GDT experiments [4] and a value of β ~ 1 achieved on 2XIIB [5] and C-2W devices [6]. Recent experimental results and the emergence of new confinement concepts encourage further development of linear systems [7,8].
The updated version of the project, which is being actively developed since 2018, integrates some of the novel ideas about the plasma confinement in linear systems, such as high-β discharge regimes and application of ECRH plasma heating methods [7]. The current version of the project also aims to capitalize on the improvements in magnet and plasma heating technologies and sets higher targets for confining magnetic field (up to 20T) and pulse duration (up to 5s) of high-power-density NBIs developed by BINP [9,10]. The target parameters of the first stage of the machine, which is planned to be constructed by 2024, are summarized in Table 1.
The project is centered around an axisymmetric magnetic mirror trap, which in its basic configuration (fig.1, top) resembles the existing experimental device GDT [11] in BINP. The main difference to the existing experiment is the increased pulse duration of ~ 5s that will allow not only reaching the steady state conditions with regards to plasma processes, but also testing the long-pulse operation of essential subsystems, such as plasma heating systems and cryogenic pumping systems. With the help of up to 10 MW neutral beam injection (NBI) power, one of the main goals of GDMT will be the exploration of advanced high-β discharge modes [12], which are expected boost the energy confinement of the machine well above the basic gas-dynamic scaling of a GDT-based fusion device. The target plasma performance in GDMT ranges from Q ∼ 4% (DT) in the worst-case scenario, when new ideas have little impact, to Q ~ 1 (DT) if the advanced confinement with β ~ 1 proves to be successful [8].
GDMT is being designed as a flexible modular system, which further into the project will be upgraded to test dedicated multimirror and helical tail sections [8] for plasma flux suppression (fig.1, bottom). In its final form with multiple tail sections and increased confinement vessel length, the machine can have total length of up to 70m and extended pulse duration of more than 1000s. Table 1 lists the parameters of GDMT in its basic configuration. 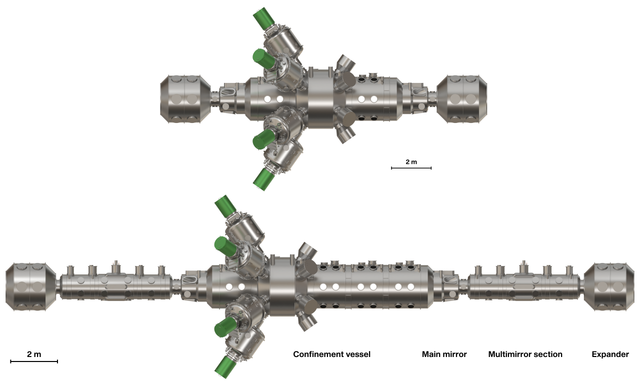 In order to achieve long-pulse (5s) and, eventually, steady state operation (> 1000s) the machine will use a fully superconducting magnet system to create the confining magnetic field. The system will consist of central a confinement solenoid (central cell), compact high-field magnetic mirror coils at both ends of the confinement zone and the additional tail sections for plasma flux suppression. Among the major requirements for the magnet system is the ramp-up operation of the central solenoid, which must be able to increase the magnetic field in the confinement zone from 0.3 to 3T within 5s. The duration of field ramp-up and plasma discharge was selected based on the expected superconductor performance during pulsed operation and the complexity of the power supply. Magnetic compression of a low-field-high-β discharge is proposed as a shortcut to a high-field-high-β discharge, which promises the highest energy confinement time if it can be achieved. In order to maximize the gas-dynamic confinement time in all modes of operation, the magnet system will also feature high-field (20T) magnetic mirrors with cold bore of ~ 240mm. Due to requirements for extremely high magnetic fields and fast ramp-up operation, the magnet system will make heavy use of second generation high-temperature superconductors (HTS) [13] to achieve the required operating parameters. Recent technology development of these superconductors enabled design of magnets operating at ultra high field at less stringent cryogenic requirements. Within this project, we propose the first ever large-volume use of high current HTS superconducting cable for a fusion research installation.
The paper describes these and other features of the machine, outlines the updated experimental program of GDMT and describes the planned near-term experimental and design activity that supports the project.