We propose a novel heating mechanism for ions in overdense plasmas by introducing two whistler waves along a strong magnetic field in the counter-beam configuration [A]. The essential process is the collapse of standing whistler waves within a short timescale comparable to the wave oscillation period. During the collapse, ions are accelerated by a static electric field and acquire a large amount of energy directly from the electromagnetic waves. This ion-heating mechanism could be applicable to various plasma phenomena in fusion energy sciences and astrophysics and become an alternative scheme of the fast ignition of the laser-driven inertial fusion energy (IFE). Ion temperature heated by standing whistler waves reaches up to the order of 10-100 keV [B], for example, 40 keV for imploded deuterium-tritium (DT) target and 500 keV for proton-boron (pB) plasmas.

The ultimate goal of fusion science is to heat ions to the high enough temperature to promote fusion reactions. In the laser-driven IFE scheme, the laser energy should be converted to the ion energy of fuels as much as possible through various laser-plasma interactions. However, there is a fundamental problem that electrons take away most of the laser energy at the first step of the interaction. Therefore, the development of direct energy transfer from electromagnetic waves to ions has a valuable meaning that overcomes the essential difficulty.

The motivation of our work is to explore an efficient mechanism of the energy transfer from the lasers to overdense ions directly. A possible mechanism of ion heating proposed recently is caused by collapsing standing whistler waves (see Fig. 1) [A]. The whistler wave is an electromagnetic wave traveling along a magnetic field line. The tangential electric field is right-hand circularly polarized to the direction of the external magnetic field. If the field strength exceeds a critical value $B_c = 10 (\lambda_0/1\mu{\rm m})^{-1}$ kT where $\lambda_0$ is the laser wavelength, then there is no cutoff density for the propagation of whistler waves. This crucial feature of the whistler wave enables the direct interaction of the electromagnetic waves and dense plasmas over the critical density $n_c$ with no magnetic field.

As for the initial setup to simulate the standing whistler wave heating, we investigate a simple configuration in which two circularly polarized (CP) lasers irradiate a thin overdense target from both sides. We perform particle-in-cell (PIC) simulations in the 1D Cartesian coordinates. The CP lasers with the frequency $\omega_0$ are injected from both sides of the boundaries of the computational domain. The polarization of the two lasers is right-hand circular toward the magnetic field direction. The normalized vector potential $a_0=e E_0/(m_e c \omega_0)$ characterizes the amplitude of the laser electric field $E_0$ in the vacuum, where $e$ is the elementary charge, $m_e$ is the electron mass, and $c$ is the speed of light. In our problem setup, the computational domain size is broader than the target thickness, so the laser lights coming from the boundaries propagate in the vacuum until they hit the target surface. The refractive index of the whistler wave, which is a function of the plasma density and magnetic field strength, determines the transmittance and reflectivity at the target surface. Since we consider the cases with a strong magnetic field, the transmittance to the whistler wave is typically more than 50%.

A series of PIC simulations reveal an effective use of the standing whistler waves in the heating part of the fast ignition scheme. A reasonable scenario for the enhancement of the energy gain is the standing whistler-wave heating of an imploded DT target by other long-pulse lasers. Here the energy gain is defined by the ratio of the generated energy by fusion reactions to the injected energy of the counter lasers. In our setup, the existence of a uniform magnetic field is a necessary ingredient. Then the cylindrical implosion perpendicular to the magnetic field line would be the best configuration.

We simulate the standing whistler-wave heating of such an imploded DT core plasma [B]. Figure 2 shows the energy spectrum of the DT core after the counter irradiation of heating lasers obtained by a 1D PIC simulation. In this run, the initial target density is assumed to be 30 times higher than the solid density, which corresponds to 1500$n_c$ for the laser wavelength of 1$\mu$m. The external magnetic field is set to be 2.1 MT (200$B_c$) and the injected laser intensity in the vacuum is 10$^{21}$ W/cm$^2$ ($a_0 = 20$). The DT core is found to be heated up to 40 keV successfully. The temperature of each species fitted by the Maxwellian distribution is 43, 45, and 2.0 keV for the deuterons, tritons, and electrons. The estimated energy gain for this case is just above unity. In the high-density limit, the energy gain increases in proportion to the density and laser pulse duration. Therefore, in order to enhance the gain, we need to make the imploded density much higher or the pulse duration of the whistler wave much longer.

In modern fusion researches, the DT reactions are commonly considered because of the lowest reaction temperature. However, the standing whistler-wave heating achieves potentially much higher temperature plasmas, which bring a possibility of ultraclean aneutronic fusion reaction such as the pB reaction. The thermal pB reaction works at the temperature over several hundreds of Kelvin. The ammonia borane (H$_6$BN) is found to be an idealistic target for the pB thermonuclear fusion. We have successfully demonstrated by PIC simulations that the protons and boron ions in the ammonia borane target are heated up to about 500 keV by the standing whistler-wave heating, where the aneutronic pB reaction is highly expected. 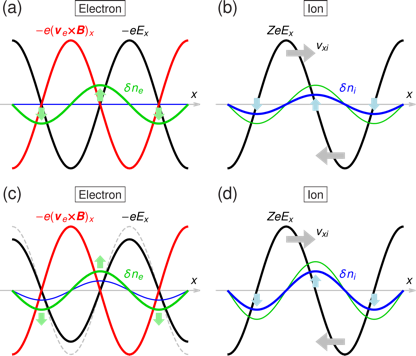 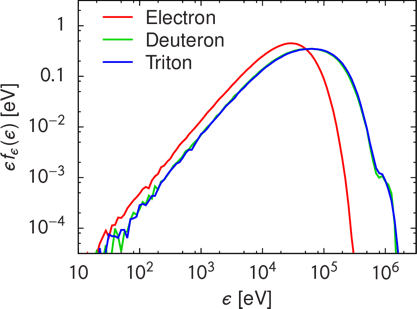