Experimental results from tokamaks with low gas puff rates have shown good agreement with the Heuristic Drift (HD) model (1) for the power scrape-off width. However, H-mode results with high gas puffs on ASDEX-Upgrade (2,3) show significant radial spreading compared with the HD model, which was explicitly developed for low gas puff conditions. Here we present an analysis based on the physics of the HD model, generalized to take into account the longer energy confinement time in the scrape-off layer (SOL) associated with Spitzer thermal resistance, as well as power loss near the target. This new generalized HD (GHD) result is in qualitative agreement with ASDEX-Upgrade data and will be compared with the latest results from both ASDEX-Upgrade and JET to be presented at this meeting. While there are indications of regions of parameter space where the SOL width increases, and so heat fluxes to divertor targets can be reduced, these are not accessible to ITER. However, ITER’s low collisionality at high density may allow easier H-mode access and high H-mode confinement.

In the HD model it is assumed that heat flows to the divertor plate at a speed proportional to the ion sound velocity. Here we take into account the thermal resistance of the SOL plasma at finite collisionality. Using the two-point model, we define the SOL energy confinement time as $\tau_E \equiv 3 n_u e T_u L_{\parallel}/q_{\parallel}$. If we assume, as in the HD model, that the power scrape-off width scales as the drift velocity multiplied by the confinement time, we can derive an implicit formula for the dimensionless enhancement factor, $\lambda_q^{\prime}$, over the collisionless result $\lambda_q \approx 1.6(a/R)\rho_{pol}$ (4). We include a factor, $f_{power}$, the fraction of the upstream heat flux that is radiated near the divertor target, and also take into account the scale lengths of $p$ and $T$ in a radially finite flux tube that is wider than either one. This gives 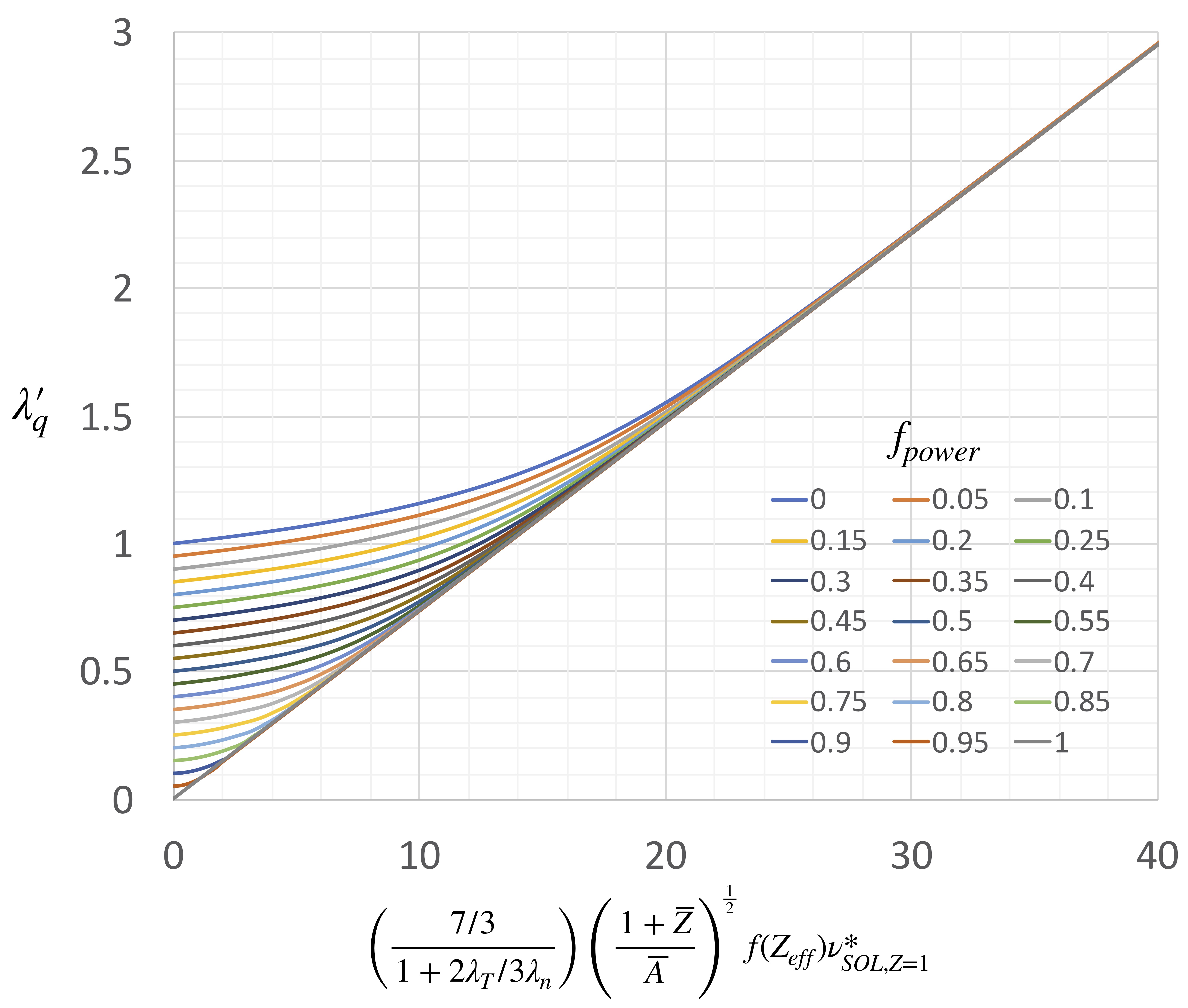 The HD model reflects the low collisionality limit of the GHD model, but expressed in terms of operational parameters such as $P_{SOL}$ and $R$ the HD model employs the upstream temperature derived on the basis of collisional thermal conduction. This gives rise to its weak, but finite, $P_{SOL}^{1/8}$ dependence. It is reasonable therefore to ask over what range in collisionality this mixed approach can be justified. Applying the two-point model just to a narrow flux tube near the separatrix, we can solve for the enhancement to the separatrix poloidal gyro-radius due to the sheath thermal resistance, $\rho^{\prime}$, a factor that is neglected in the HD model. As shown in figure 2, this is a small effect in the region of low gas puff data, justifying the use of the mixed HD model for these conditions. Indeed, the small variation in $\rho^{\prime}$ in figure 2 over the range of low gas puff data serves to counteract the small rise of $\lambda_q^{\prime}$ vs. collisionality in this range in figure 1. 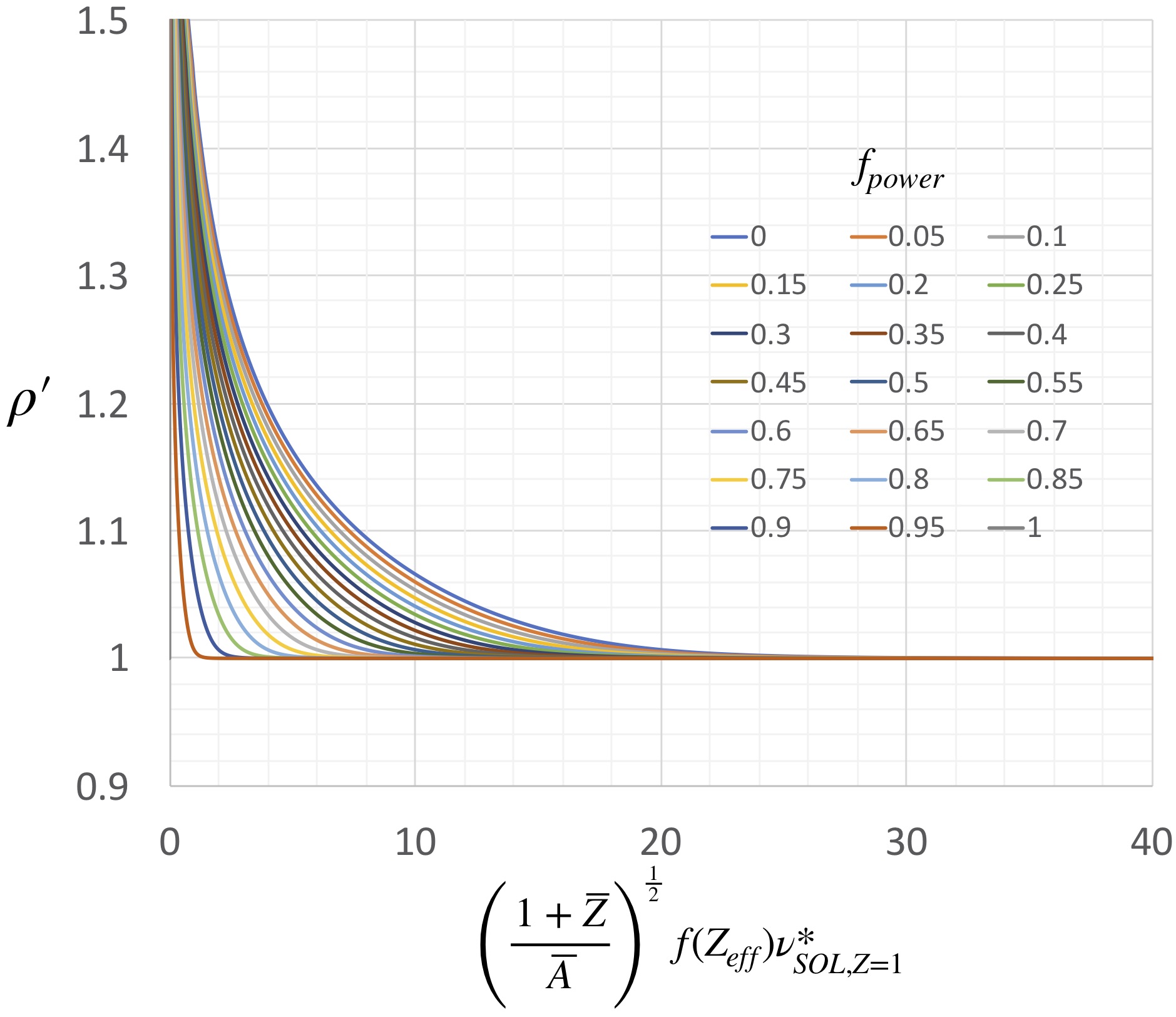 The collisional broadening of the SOL relative to the HD model shown in figure 1 is not likely to benefit ITER either by spreading the heat flux or allowing a larger radiating volume, since ITER is projected to operate at low collisionality. Furthermore, experimentally operation at higher collisionality correlates with reduction in confinement (3). To take advantage of the effect shown in figure 2 is also problematic, since large values of $\rho^{\prime}$ imply that the divertor target temperature approaches the upstream temperature, which would result in unacceptable sputtering of tungsten.

The confinement reduction observed experimentally at high collisionality may be due, at least in part, to reduction in flow shear near the separatrix. On the core side of the separatrix, the drift is approximately given by $v_{E\times B} = -T_i/(eB\lambda_{p_i})$ (6), where the minus sign indicates flow in the direction opposite to the ion diamagnetic drift. On the SOL side of the separatrix, in the absence of parallel currents, the $E \times B$ drift is approximately given by $v_{E\times B} = (0.71T_u + 2.29 T_t)/(EB\lambda_{T_e})$. This implies an arbitrarily high shearing rate just at the separatrix, mitigated only by cross-field viscosity. Thus the combination of high heating power, leading to high separatrix ion and electron temperatures, in combination with a collisionless edge, implying a narrow SOL at high $f_{power}$ and low collisionality (figure 1), should be conducive to turbulence suppression by sheared flow near the separatrix. This could ease transition to the H-mode and provide high H-mode confinement properties, potentially favorable implications for ITER’s low collisionality, high density operating point.

Finally, we note that the anomalous radial thermal diffusivity required to produce a SOL width greater than that of the HD model scales as gyro-Bohm (7), so projections indicating that the HD model gives significantly too narrow a SOL for ITER require transport near the separatrix to scale less favorably than implied by the observed H-mode gyro-Bohm confinement trend.

Robert Goldston (Princeton Plasma Physics Laboratory)
There are no materials yet.