The H mode is often regarded as the preferable operation regime for a fusion reactor due to its superior confinement properties [1], but it comes with a major disadvantage: edge-localized modes (ELMs), which lead to unacceptably high heat loads on the divertor when extrapolated to large-scale machines [2]. Even though a few steady-state ELM-free modes of operation are known [3,4], each of them has different drawbacks and the ideal solution has not yet been identified. Therefore the development of alternative regimes is very important for the success of fusion energy.

This contribution reports on a stationary H mode without ELMs achieved in ASDEX Upgrade (AUG) by applying central electron cyclotron resonance heating (ECRH) above the L-H threshold with adequate fueling [5]. It is naturally obtained in favorable $\nabla B$ configuration without the need of fresh boronization for wall conditioning and exhibits several features which are desirable for future reactors, such as dominant electron heating, low input torque, possibility of access at low input power, good energy confinement, high density, and no impurity accumulation despite the absence of ELMs. Figure 1 shows an example of such a discharge with a sequence of ECRH steps, toroidal magnetic field $B_{\mathrm{t}} = -2.5 \, \mathrm{T}$, plasma current $I_{\mathrm{p}} = 0.8 \, \mathrm{MA}$, edge safety factor $q_{95} = 5.4$, elongation $\kappa = 1.7$, average triangularity $\delta_{\mathrm{avg}} = 0.25$, and constant deuterium gas puff rate of $2.6 \times 10^{21} \, e^{-} / \mathrm{s}$ after the ramp-up. As the heating power is increased, the plasma goes from L-mode to I-phase at $2.16 \, \mathrm{s}$, followed by an ELMy H-mode at $2.95 \, \mathrm{s}$. With another ECRH step it enters the regime without ELMs at $3.45 \, \mathrm{s}$, as evidenced by the disappearance of the large divertor shunt current spikes. The transition to this ELM-free H-mode is accompanied by a strong energy and density increase, reaching a Greenwald fraction $f_{\mathrm{GW}} = 0.8$ with the radiated power always below the external input power. The plasma remains stationary for about 10 energy confinement times ($\tau_{\mathrm{E}} = 0.2 \, \mathrm{s}$), with an enhancement factor $H_{\mathrm{98}} = 1$, until the end of the flattop, being limited in duration only by the inductive current drive. The ELMy phase can be avoided by operating at a higher δ, which also expands the ELM-free window with respect to input power ($P / P_{\mathrm{LH}} \approx 1 - 2$), allowing much higher core temperature and pressure to be achieved. 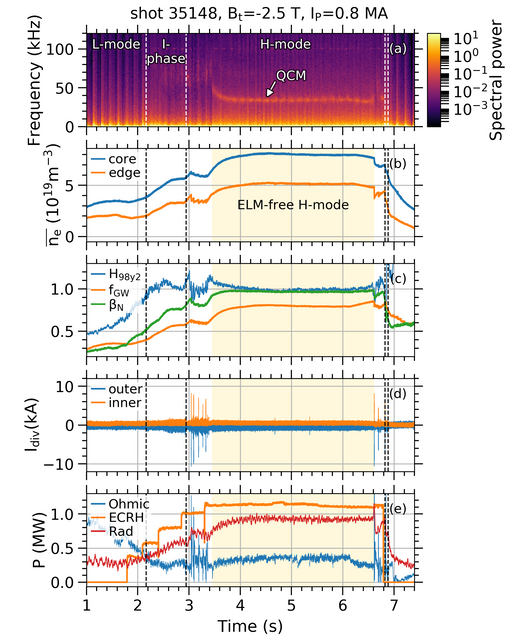 The stationary ELM-free H-mode always features an edge electromagnetic quasi-coherent mode (QCM) whose density fluctuations are measured by several diagnostics, for example microwave reflectometry (figure 1 (a)). Its magnetic signature is detected only by the pickup coils closest to the plasma, probably because of the strong radial decay due to its high mode number ($n \approx 20$). The QCM seems to be responsible for enhanced transport losses as its appearance and disappearance are correlated with changes in edge and divertor parameters.

This regime shares several key features with Alcator C-mod’s EDA H-mode [6], such as being obtained with significant electromagnetic wave heating, becoming more robust at high triangularity, not existing with too low fueling and featuring an edge QCM which produces outward plasma transport [7], enabling steady-state operation with good confinement and no ELMs.

To qualify as a reactor operating scenario, an ELM-free regime must be integrated with core and divertor radiative cooling. First experiments at AUG with argon seeding [8] showed the compatibility of pedestal radiative cooling with no ELMs up to 5 MW ($P / P_{\mathrm{LH}} \approx 4$) so far, including neutral beam injection. This contribution will present the main properties and recent results of experiments on the stationary ELM-free H-mode in AUG, which could be a promising regime for future devices such as ITER and DEMO.