Efficient RF current drive is essential for developing a steady-state operation scenario in a tokamak. This paper investigates the impact of lower hybrid wave interaction with the tokamak boundary plasma on wave power deposition on the Alcator C-Mod and EAST tokamaks. The results presented here suggest that the presence of edge density fluctuations in a tokamak may need to be considered in understanding wave propagation and absorption observed in a present-day lower hybrid current drive experiment operating in a multi-pass damping regime. Even in a reactor regime that will operate in a single-pass damping regime, providing a quiescent edge and scrape-off-layer plasma in front of the antenna may be critical to mitigate the first-pass parasitic wave interactions with the boundary plasma. This quiescent edge condition may be achieved by wall conditioning or an optimization of launch location such as high field side launch in a double null configuration.

This paper hypothesizes that the central power deposition widely observed in the present-day LHCD experiments is due to wave scattering by turbulence and/or parametric decay instabilities {1,2]. In a standard model without considering such interactions, the predicted power deposition profile is generally peaked at off-axis, which is not in agreement with the experimental observation. A heuristic approach is adopted by introducing spectral broadening mechanisms in both the perpendicular wave-vector {3} and the parallel refractive index (n$_{//}$) spaces {4}. The ray-tracing /Fokker-Planck (GENRAY {5}/CQL3D {6}) solver is utilized within the $\pi$-scope {7} framework.

A focus is given to identify the ray components that can be absorbed by the central plasma on the first pass in order to reduce the sensitivity of the power deposition profile to changes in plasma condition. Figure 1 shows that ray damping characteristics can be altered with a change in the initial orientation of the wave perpendicular vector with respect to the surface normal direction. In a typical modeling, the wave-vector is assumed to be fully directed to the surface normal direction. As shown in Figure 2, a rotation of the perpendicular wave-vector by ~-20 deg at the initial ray condition is found to be effective to reproduce the centrally peaked current profile observed in the C-Mod experiment {8}. C-Mod is a small-sized, high-density tokamak, which can induce a large variation of the poloidal mode number even with a moderate rotation of the perpendicular wave-vector.

On the other hand, EAST operates at a low magnetic field and density with a high aspect ratio, compared to C-Mod. This provides a unique plasma condition in determining lower hybrid wave propagation and absorption in terms of wave accessibility and geometrical n$_{//}$ up-shifts. While a kinematic analysis implies that such a power deposition is prohibited at a typical n$_{//}$ of 2.1 {9}, LHCD experiments on EAST also indicate a central deposition of the 4.6 GHz wave power. An introduction of either wave-vector rotation or high n$_{//}$ components may be necessary to interpret the experiment. For example, without a rotation in the perpendicular wave-vector, Figure 3 shows a window of n$_{//}$~4 that is necessary for central propagation and absorption for a typical EAST plasma with n$_{e,0}$ = 3x10$^{19}$ m$^{-3}$ and T$_{e,0}$ = 2 keV. In this case with a low plasma temperature, the initial launch point for the high n$_{//}$ ray is taken to be below the midplane in order to induce an adequate amount of n$_{//}$ up-shift from the poloidal component {3}, but within the poloidal extent of the 4.6 GHz grill antenna of EAST. The antenna spectrum may possess these high n$_{//}$ sideband components. A detailed investigation of two spectral broadening mechanisms will be presented with an aim to identify strategies for providing a quiescent boundary plasma for an optimized RF coupling. 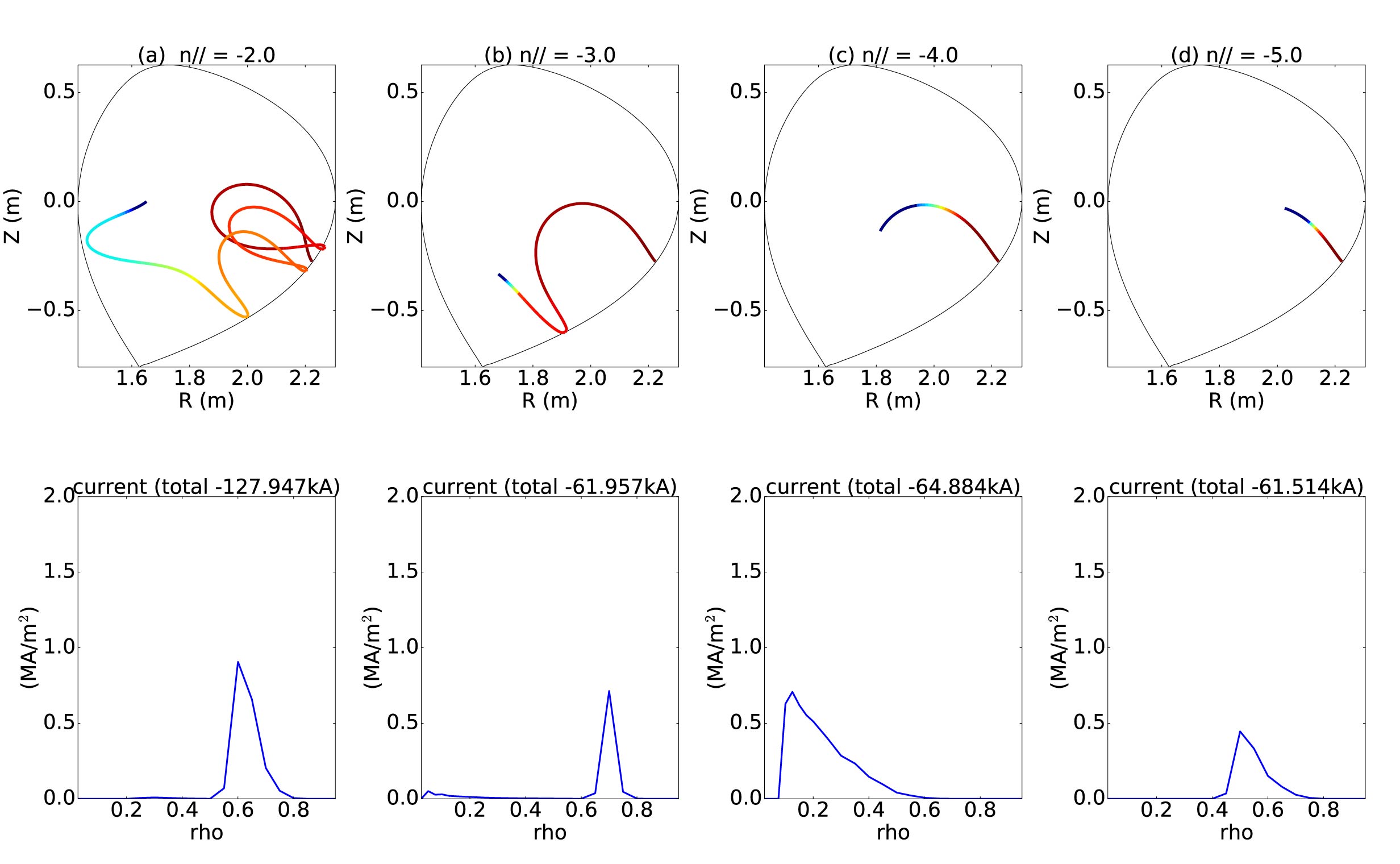