EX
The new results of the experimental study of the ion cyclotron emission (ICE) characteristic features in the NBI heated plasma of the TUMAN-3M tokamak 1 are presented. Figure 1 shows an example of the NBI ICE spectrum in deuterium plasma with deuterium NBI, comprising fundamental cyclotron resonance (IC) frequency and its harmonics. For the first time, a dispersion relation for the NBI ICE was investigated experimentally by two independent methods: using Doppler-shifted resonance condition (results presented in Fig. 2) or performing phase analysis of the signals of toroidally separated detectors. It is found that the observed NBI ICE spectra agree with the assumption that the underlying instability responsible for ICE excitation is magneto-acoustic one propagating nearly perpendicular to the magnetic field. NBI ICE spectra observed in deuterium and hydrogen plasma are different not only in terms of mass dependence of cyclotron frequency but also in relative amplitude and temporal dynamics of the lines comprising the spectra. Other characteristic features of the spectra, such as their fine structure and its dependence on isotope composition, are also discussed. 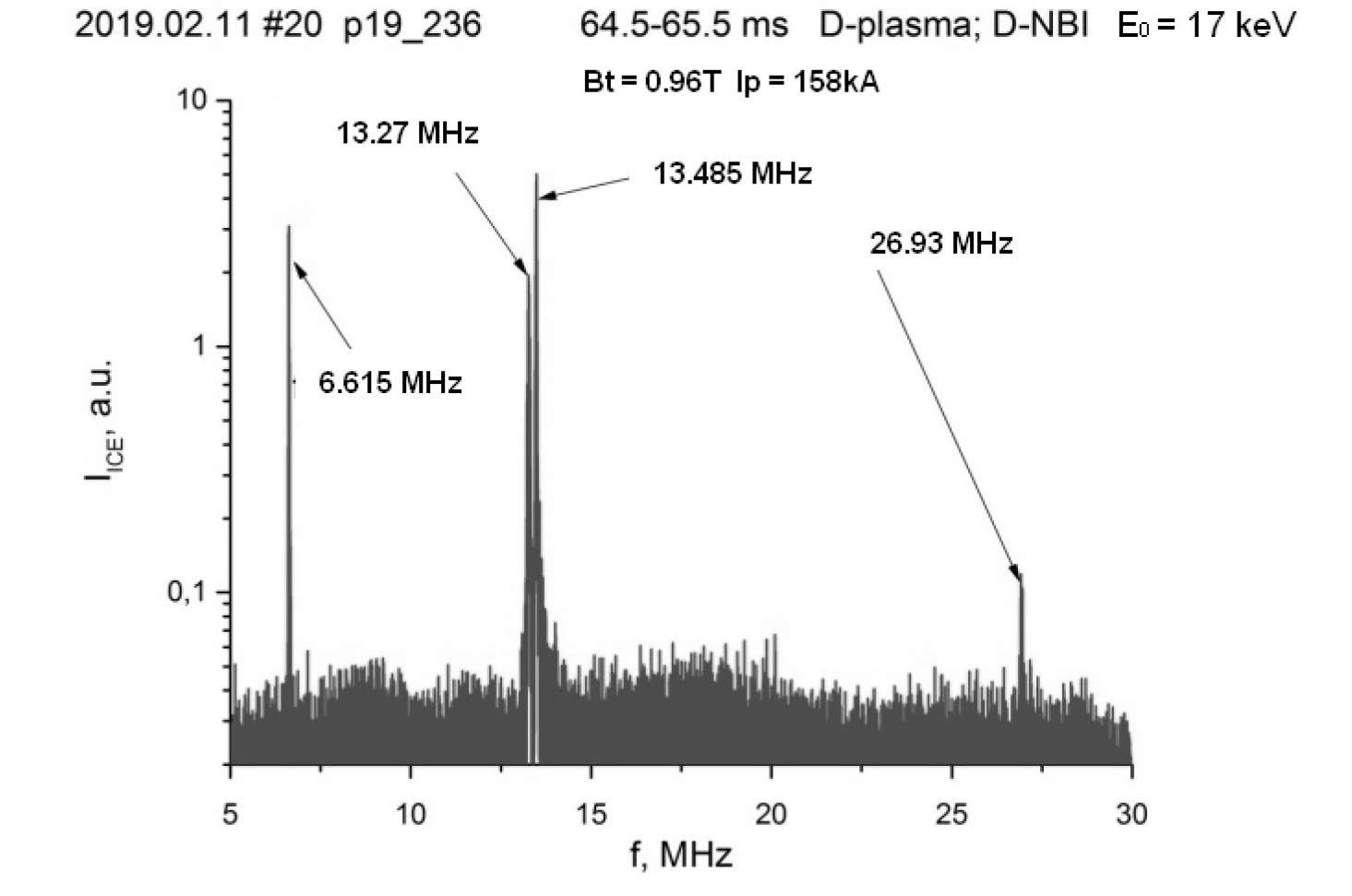 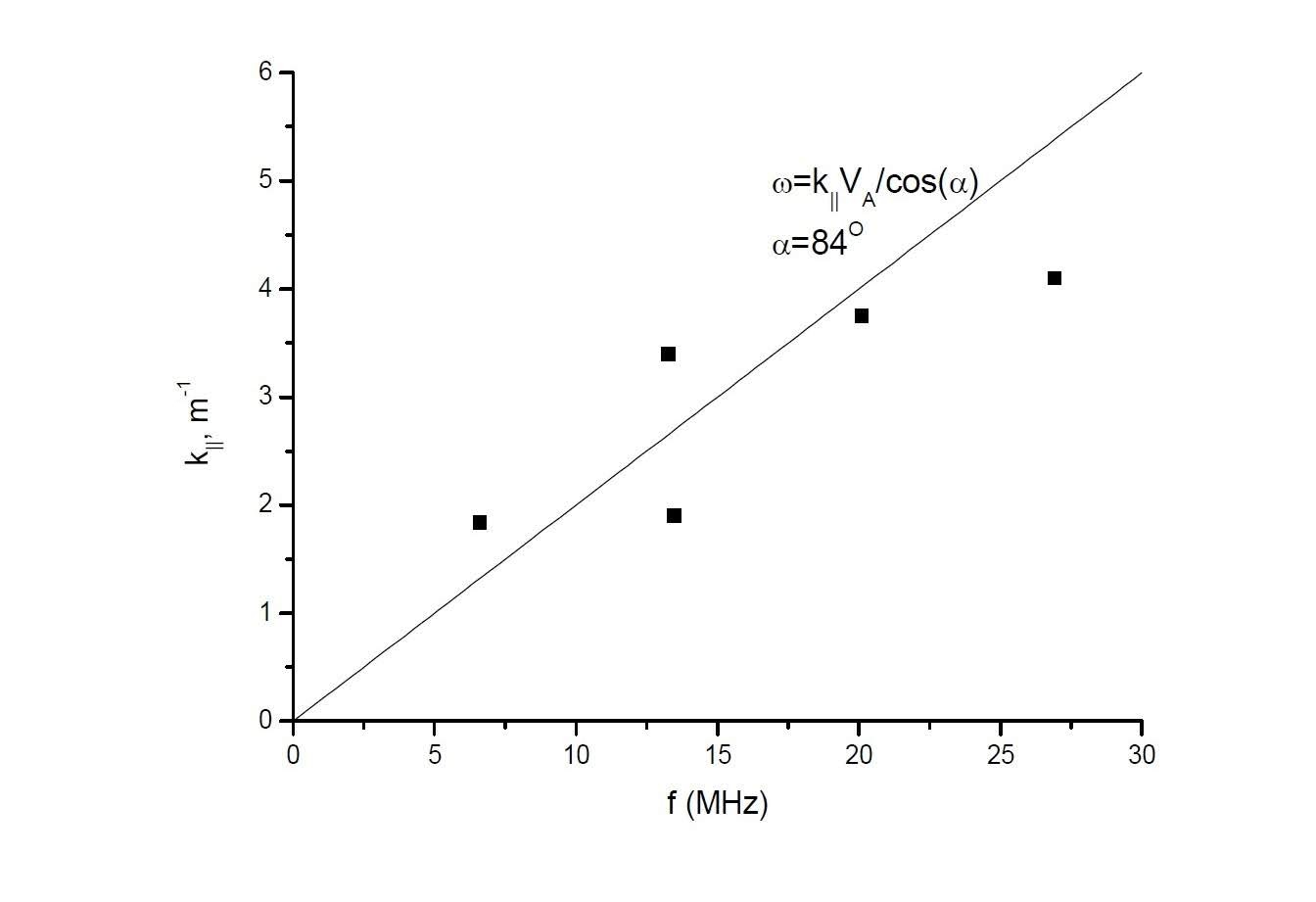 The emission of electromagnetic waves in the ion cyclotron range of frequencies is routinely observed at many magnetic fusion devices in the presence of fast ions 2. The non-equilibrium population of fast particles may be created by auxiliary heating systems, or appear as a result of fusion reactions [3]. As spectral properties of ICE are closely related to the fast ion population dynamics, it is considered to be a prospective diagnostic tool for fast ion component.
The experiments were performed in hydrogen and deuterium plasmas, with hydrogen, deuterium, or mixed beams with up to $\ E_0$=20 keV of energy and P = 0.3 MW of net power injected tangentially in co-current direction. The ICE was observed using in-vessel arrays of magnetic probes equipped with appropriate high-frequency electronics and ADCs. In all the cases, the frequency of the ICE observed lies in the range of 5 to 30 MHz and corresponds to the ion cyclotron resonance (ICR) frequency (and its harmonics) in the vicinity of the plasma center. This is remarkably different from observations on the other tokamaks, where ICE frequency corresponds, with rare exclusions, to resonance condition at the plasma periphery. When the mixed beam was injected (~70% D plus ~30% H), the observed emission frequency spectra correspond to the minority fast ion’s IC resonance and its harmonics (i.e. hydrogen ICR in D-plasma, and deuterium ICR in H-plasma). If the pure D or H beam was used, emission at the harmonics of the ICR frequency of the main ion was registered, with fundamental frequency strongly suppressed in D-plasma, but strong enough in H-plasma. Typically, NBI ICE spectral lines consist of 2 to 4 and more narrow (~ 50 kHz wide) lines separated by uneven intervals of 100 to 300 kHz. These spectral lines behave differently if saw-tooth oscillations or MHD islands are present in the discharge, indicating the different locations of the resonance region and/or fast ions causing them. The NBI ICE appears with a 2-5ms delay after a start of NBI pulse, obviously due to the necessity of a significant FI population to build up. On the other hand, ICE disappears not later than ~100 $\mu s$ after NBI termination, much faster than FI slowing down time. In some shots, NBI ICE terminates well before the end of the NBI pulse. This observation suggests that the presence of FI is a necessary but not a sufficient condition for the ICE to develop. Obviously, a balance between the FI drive and dumping of the underlying instability is a key factor regulating ICE excitation.
Calculations of the fast ion trajectories in the TUMAN-3M geometry revealed most probable candidate source of free energy for excitation of the instability observed – the stagnation fast ions (SFI) residing close to the magnetic axis or, in some cases, the potato ions (PFI), having much wider drift trajectories [4, 5]. When traveling along both types of drift trajectories, fast ions spend most of their flight time close to the plasma center, thus accentuating central ICR frequency. For both types of FI, Doppler-shifted resonance condition in a form $\omega = l\omega_{ci}+\textbf{kV}_{fi}$ was used for dispersion relation analysis [6]. Here, $\omega$ and $\textbf{k}$ are the ICE frequency and wavenumber, $\omega_{ci}$ is ICR frequency of the FI, $\textbf{V}_{fi}$ is its velocity, l is harmonic’s number. For SFI, $\textbf{kV}_{fi}\approx k_\parallel V_\parallel$, where index || denotes component of the wave vector and FI velocity parallel to the magnetic field. For PFI, $\textbf{kV}_{fi}\approx k_\perp V_d$, where $\ k_\perp$ is a component of wave vector perpendicular to the magnetic field, and $\ V_d$ is the gradient drift velocity of the PFI at the vertical part of the potato trajectory. Another factor influencing the ICE spectrum is the energy spectrum of the injected atomic beam. Fractions of atoms with energies $\ E_0$/2 and $\ E_0$/3 are usually present in the beam. The FIs with such energies form SFIs and PFIs with slightly shifted trajectories, with respect to the trajectory of FIs with energy $\ E_0$.
Dispersion relation analysis of the NBI ICE was performed using the above-mentioned Doppler-shifted resonance condition for fast ions residing on the stagnation trajectories. The latter were found from the equation of motion for FI with known total energy and in realistic experimental magnetic field configuration of the selected plasma shot. Figure 1 shows an example of the NBI spectrum observed in D-plasma with toroidal field $\ B_T$ = 0.96 T during injection of D-beam with energy $\ E_0$ = 17 keV. Fundamental central deuterium ICR frequency ~6.6 MHz and four harmonics are seen. The second harmonic is split into two lines separated by ~200 kHz, while the third harmonic is very weak and hardly seen in this graph, but can be resolved after appropriate filtering. Parallel wavenumbers corresponding to each spectral line are plotted as a function of frequency in Figure 2. The solid line indicates dispersion relation for the magneto-acoustic instability $\omega = kV_A = (k_{||}/\cos\alpha )V_A$, here $\alpha $ is a propagation angle (between $\textbf{k}$ and $\textbf{B}$), $\ V_A$ – Alfven velocity. As seen, a good agreement is reached for $\alpha=84^0$, i.e. nearly perpendicular propagation. With the help of toroidally and poloidally separated probes, it was possible to analyze the spatial structure of the observed NBI ICE – their mode numbers m and n, and direction of propagation as well. Results are found to give a close estimation of the propagation angle.
Similar in frequency range but different in underlying physics is the ICE observed on the TUMAN-3M in the absence of fast ions in the ohmically heated plasma. Some of the characteristic features of the ohmic ICE, with emphasis on their modifications under the NBI influence, are discussed.
This study of NBI ICE was supported by the RSF, project no. 16-12-10285-P. The experiments on the TUMAN-3M tokamak were performed under the state assignment of the Ioffe Institute, topic No. 0040-2019-0023.
$\textbf{References}$
1. L.G. Askinazi et al 2018 Nucl. Fusion 58 082003
2. McClements K.G. et al 2015 Nucl. Fusion 55 043013
3. Cottrell G.A. et al 1993 Nucl. Fusion 33 1365
4. L.G. Askinazi et al 2018 45th EPS Conference on Plasma Physics P5.1084
5. L.G. Askinazi et al Tech. Phys. Lett. 44, 1020–1023 (2018).
6. S. E. Sharapov et al, Phys. Plasmas 21, 082501 (2014).