Electric fields in plasma plays a key role in understanding many plasma phenomena from confinement to particle flows. In fusion machines like tokamak, changes in the edge radial electric field are also correlated with changes in many edge phenomena such as L-H transition, rotation, transport, and the suppression of large magnetohydrodynamic (MHD) instabilities called ELMs (Edge Localized Modes) making it a very important parameter to be known with precise resolution both spatially and temporally. Gradients of plasma potential, gives the electric field present in the plasma, can be measured directly by emissive probes. Exponential region in emissive probes depends on Tw [wire temperature] while of collecting probes depends on Te [electron temperature]. Since in most plasmas Tw << Te, emissive probes can measure the plasma potential more accurately 1. Further, test experiments in CASTOR concludes the difference between the potential of cold probe and emissive probe is 1.3 times the electron temperature 2. Emissive electrode biasing experiments in ISTTOK shows its vital role in confinement of particles [3]. However, typical limitations of emissive probes such as the potential drop cross probe wire results in temperature non-uniformity across the filament rendering non-uniform electron emission. Requirement of separate heating and biasing electronic circuit increases make electronic circuitry more complex while need for filament replacement makes emissive probes less popular to be used in tokamaks as cited by Kella V P et al. These problems become more significant in presence of strong potential gradients and in magnetic fields as described by Schrittwieser R et al. Laser Heated Emissive Probes (LHEP) provides an excellent solution as suggested by Sheehan and Schrittwieser R. separately. Although LHEP eases out some of the limitations of emissive probes for plasma potential measurements, it brings new challenges regarding proper choice of probe-tip material, aligning the laser to the probe-tip inside the vacuum, etc. Owing the fact of high magnetic field environment, UHV, mechanical constraints and many tokamak exclusive challenges no LHEP, to our knowledge, is attempted to be used in tokamak. A LHEP system is developed and installed on ADITYA-U tokamak for obtaining first measurements from such probes in tokamaks. The radially movable LHEP system comprising of two probes of 6 mm diameter each, is mounted on radial port on the Aditya-U tokamak. LHEP system is designed to measure plasma potential and its fluctuations in the SOL region taking into account of the experimental and technical parameters of Aditya-U. Novelty in design is the compactness of system and continuous focusing of laser (cw CO2 laser at 10.6 µm, 55 W) onto probe surface irrespective of the radial movement of probes all without disturbing UHV of Aditya-U. Laser is shined on to the probetip using an air-cooled optical fiber. The crucial design facilitates up to 1 mm accuracy to fix radial positions of probes while up to 0.1 mm accuracy to focus laser onto probe surface. In house designed and developed electronics for LHEP ensures data acquisition with maximum signal to noise ratio along with probe biasing as per tokamak requirements. The photograph of the installed LHEP diagnostic system (both probe support system and laser focusing system) is shown in figure 1. 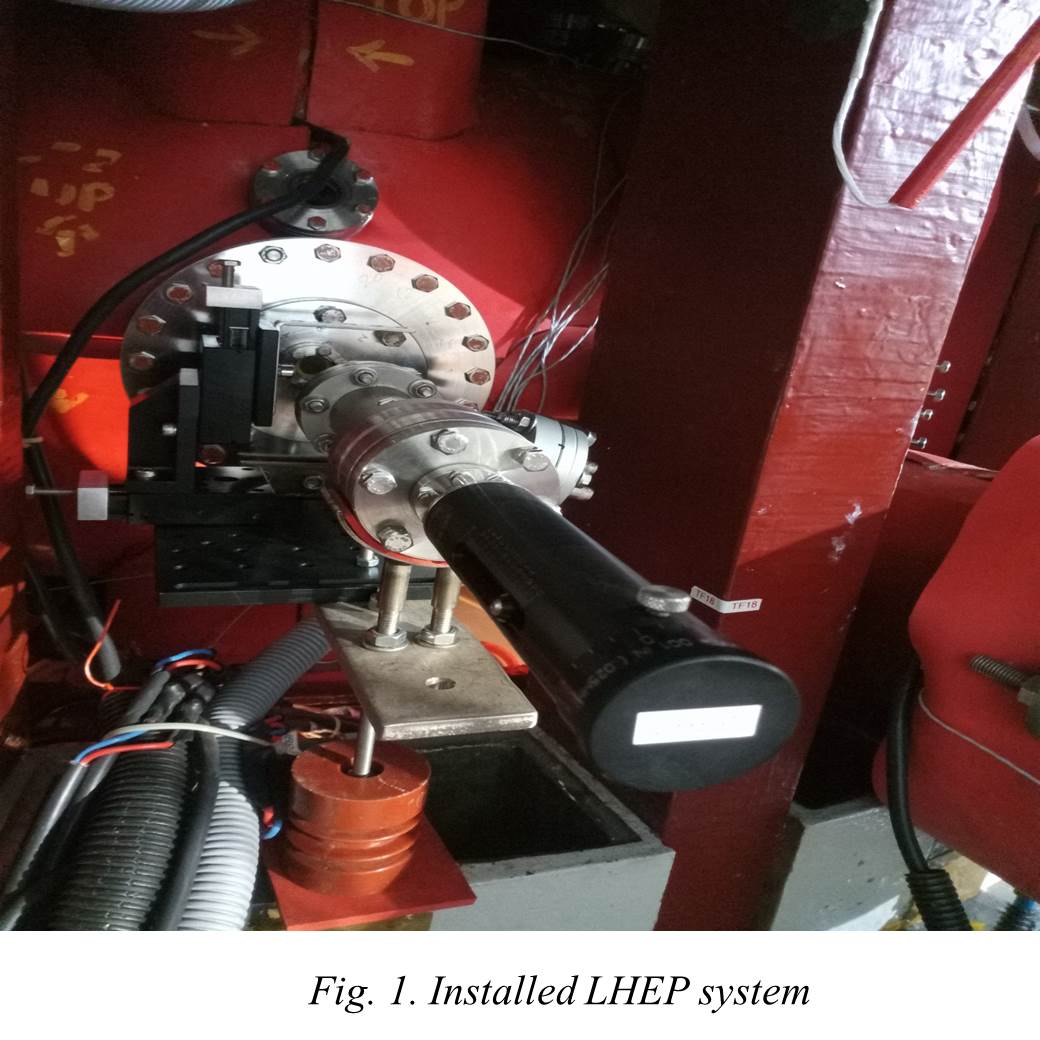 Two graphite probes of diameter 6 mm is placed at r ~ 26.5 cm (in the SOL region, 1.5 cm outside the limiter) in ADITYA-U tokamak edge region. Before, heating the probes, the cold probe characteristics is obtained for both the probes. The temporal profile of floating potential recorded from
both the probes in cold condition are plotted in figure 2. 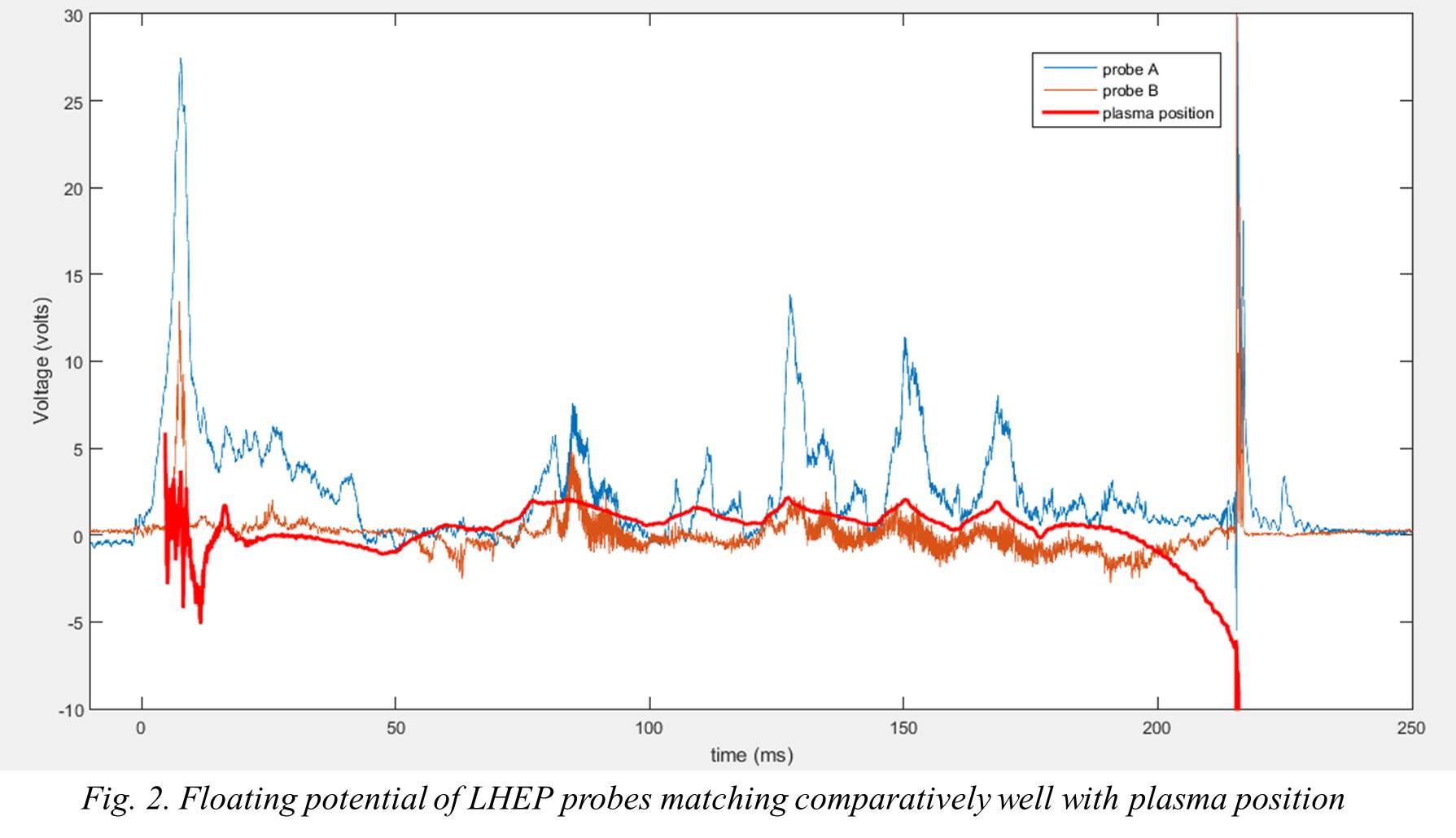 The variation in floating potential with plasma column movement and with periodic gas puffs are studied in detail. Furthermore, applying a voltage sweep to the probes, electron density and temperature are estimated and their variation with gas puff are recorded for comparing the cold characteristics with LHEP characteristics. After these initial measurements, the LHEP probe-tip is biased with respect to vessel thereby recording V-I characteristics for several probe temperatures to ascertain the constant emission region of the probe. The plasma potential is then determined using the floating potential method [6]. Experiments have been carried out by measuring the plasma potential fluctuations by heating one probe with Laser and measuring floating potential fluctuations from the other probe in cold condition, fluctuations in electron temperature have been obtained in the edge region of ADITYA-U tokamak. In this paper, first measurements of LHEP from tokamak edge region is reported. The mean value of plasma potential and its fluctuations are studied in different plasma discharges during gas-puff applications of different gases such as neon, argon etc. is studied to show how different gases modify the edge plasma parameters in ADITYA-U tokamak.