It is an extreme challenge to reduce the transient peak of the heat load on the plasma facing components (PFC) in tokamak plasma$[$1$]$. One effective way is to increase the wetted area on the divertor target by splitting the strike point. Most of the experimental results show that the change of magnetic topology induced by RMP and LHCD is responsible for the strike point splitting$[$2-4$]$. However the JET experiment reported the observation of double peaks of particle flux on the divertor target without the variation of magnetic topology$[$5$]$, and the simulation work pointed out that the radial E×B drift could be a candidate for interpreting such change$[$6$]$. Recently, double strike points of the divertor particle flux has been observed with the upgraded divertor Langmuir probe arrays$[$7$]$ in the HL-2A ECRH plasmas, which does not change the magnetic topology as discussed in the previous reports$[$2-4$]$. Thus, it is necessary to study the strike point splitting mechanism with different plasma conditions. Here we firstly report the double strike points of divertor particle flux in HL-2A ECRH plasmas, and then present the simulation with SOLPS compared to the experimental observation.
HL-2A is a medium size tokamak with closed divertor, which is routinely operated under the lower single null (LSN) configuration with the clockwise direction of toroidal magnetic field B$_t$ and anticlockwise direction of the plasma current I$_p$. Figure 1 shows the typical evolutions of the parameters in L-mode with ECRH. As we can see, the particle flux peak increases clearly on both the outer (Figure 1 (c)) and inner (Figure 1 (d)) divertor target when the ECRH is turn on, and about two milliseconds later, the second peak appears gradually on the outer divertor target. In order to observe the evolution process clearly, the profiles of particle flux are displayed in Figure 1(c1) with the curves in different colors, and each curve represents the mean values of a period of 3ms indicated by the arrows. There is only a single peak at Z=-79.1cm before 309ms, and the secondary peak appears at Z=-76.7cm from 309ms to 312ms as shown by the black curve, which is followed an obvious increases after 312ms. The evolution shows there is physical process during the formation of the double strike points, which is relevant to the ECRH. However, the strike point splitting is not observed on the inner divertor target, and there is only a slight upward movement of the single peak. Moreover, the fueling also has an obvious effect on the distribution of the particle flux. The particle flux is increased due to the second fueling pulse at about 333ms on the outer divertor target, but the double-peak structure is weakened due to the fueling. 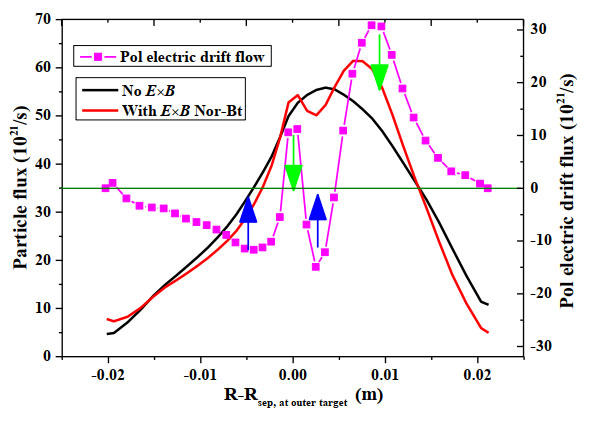