In magnetically controlled fusion devices, improving plasma performance is crucial for enhancing the confinement efficiency. An improved regime, high confinement mode (H-mode), has been chosen as the standard operating scenario for the international thermonuclear experimental reactor (ITER). Recently, the energy confinement improvement by externally seeded low or medium Z impurities has been observed both in low confinement mode (L-mode) and H-mode plasmas. In metallic wall tokamaks, the energy confinement is lower than that in carbon wall case with identical configuration and input power. Fortunately, the confinement loss with respect to the carbon devices can be recovered by seeding impurity gas, such as nitrogen seeding in JET and ASDEX Upgrade [1, 2]. More recently, in the carbon wall tokamak of the HL-2A, the core energy confinement of the H-mode plasma is improved by edge-deposited neon or argon impurities seeded by the supersonic molecular bean injection (SMBI), which is a useful fuelling method with higher fuelling efficiency than that of gas puffing. During the edge-core coupling process after the impurity seeding, distinct responses of electron and ion thermal transport to impurity seeding is found for the first time. The study suggests that the impurity ions have diverse effect on the different scale turbulence and the resulting thermal transport. The distinct responses are accompanied with the increase of ion temperature. Further improvement of core ion temperature in the H-mode plasmas is beneficial for fusion reaction in the future devices. 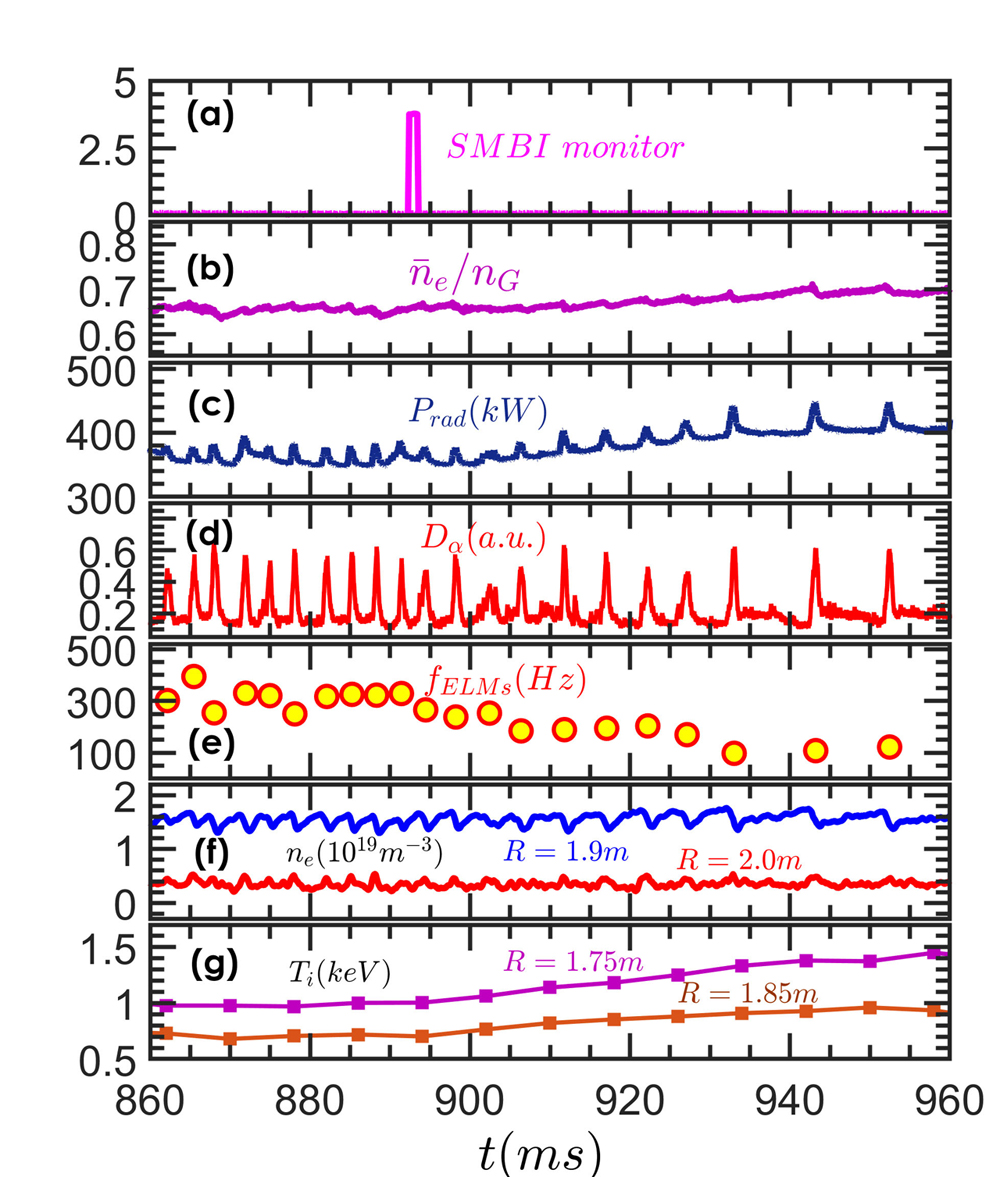 In the HL-2A H-mode plasmas, the impact of spontaneously accumulated and externally seeded impurities on plasma turbulence and edge-localized modes (ELMs) has been intensively investigated [3-5]. The response of the resulting transport to impurity ions is expected to affect the plasma energy confinement. As Fig.1 shows, the confinement is improved by neon impurity seeding in the ELMy H-mode. The neon SMBI pulse length is 1ms. The plasma density moderately increases to $0.7$ times of the Greenwald density limit after the SMBI. The impurity increases the plasma radiation power. For the features of the ELMs, the amplitude is almost identical as evaluated from the divertor $D_\alpha$ signal intensity. However, the ELM frequency decreases to $0.3-0.5$ times lower than that before the SMBI. BOUT++ simulation predicted that the shift of the pedestal profile could change the peeling-ballooning stability. The prolonger inter-ELM periods allow the plasma to build a higher pedestal density. Regarding the ion temperature, it increases both at the plasma edge and core after the impurity seeding as shown in Fig.2(a). Similarly, this observation is also found in the HL-2A experiment with argon impurity seeding by SMBI. Figure 2(b) shows the time traces of electron and ion temperature increment ratios ($r_e$ and $r_i$) before and after the neon seeding by SMBI. It shows that the electron temperature increment ratio is almost unchanged at the edge and core plasma region after the impurity seeding. On the contrary, the increment ratio of ion increases to $0.2-0.4$ after the SMBI. The results indicate that the ion and electron heat flux exhibits distinct responses to the impurity seeding. It suggests that the electron and ion thermal transports are decoupled by the impurity seeding. The decoupled ion thermal transport contributes to an improved energy confinement. Theoretical studies predicted that the effect of impurity on the electron and ion scale turbulence is quite different. Impurity ions can induce the scale separation between electron and ion thermal transport. The seeded impurity could change the core heat flux via the decoupling transport, resulting in a higher ion temperature profile and an enhanced energy confinement in the H-mode plasmas. 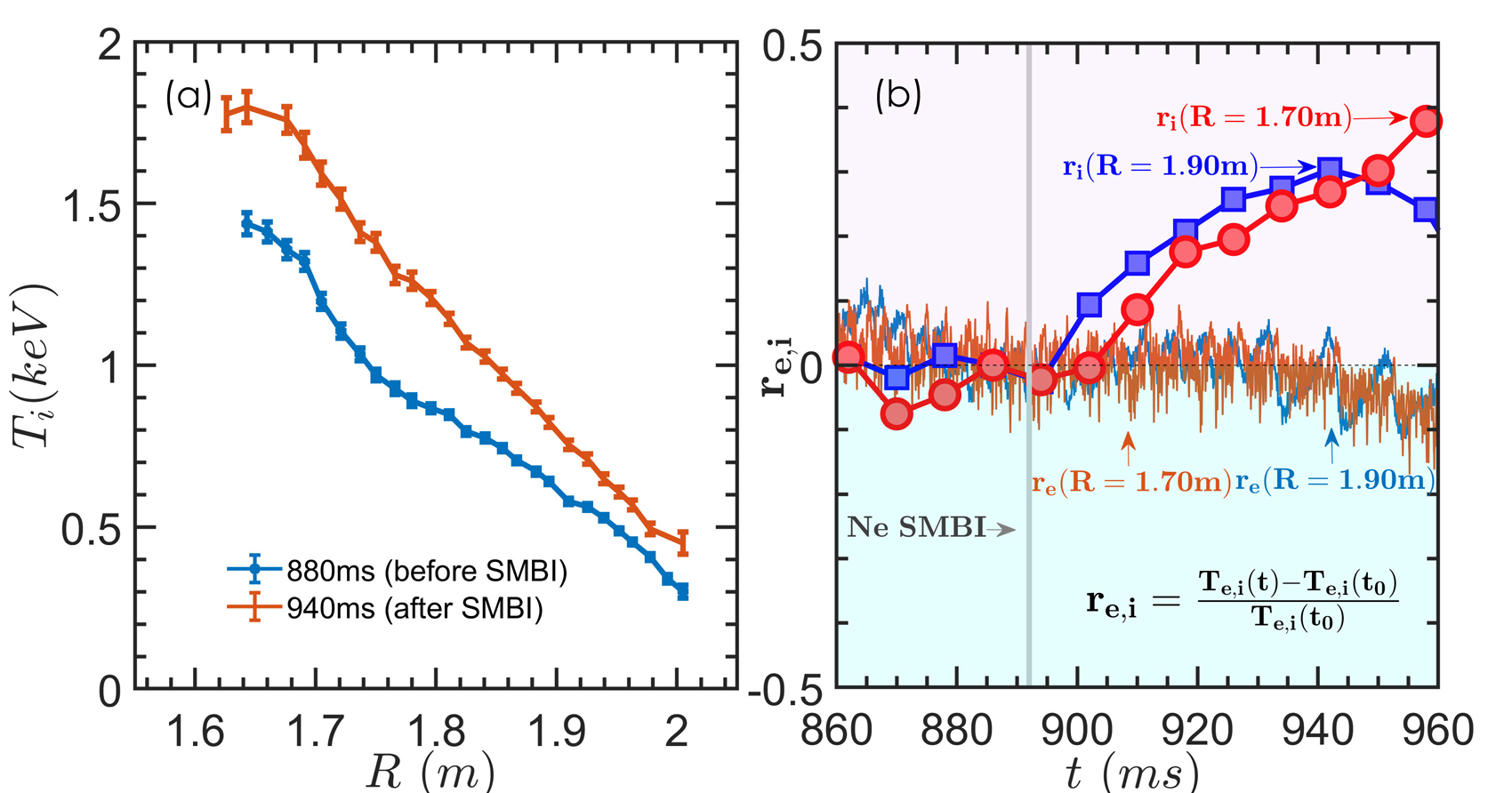