In JET plasma with a carbon wall (JET-C), and most other existing tokamaks, exceeding a critical density results in a H-L back transition, even when well above the H-mode power threshold. In contrast, at high density, JET plasma with a Be/W ITER-like wall (JET-ILW) always enter a ‘dithering’ phase before the H-L back transition, which enables a ($\approx20\%$) higher H-mode density limit (HDL) than in JET-C [1]. Burning plasma devices, such as ITER, will operate at high density to enable partial or total divertor detachment. The observed JET-ILW results suggest ITER can operate in H-mode at density above that previously predicted. This paper studies the edge-SOL physics of the HDL and the dithering phase. A hypothesis for the dithering phase limit cycle is given and the implications for high density operation of burning plasma devices such as ITER is presented. 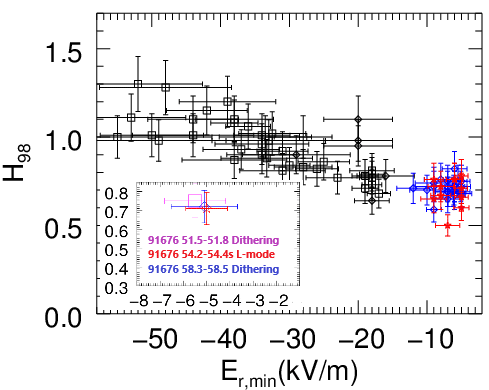 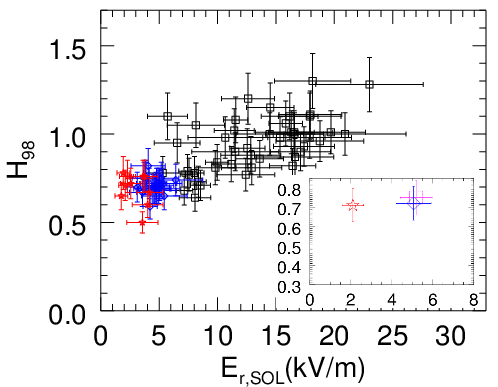 Across a dataset of JET-ILW plasma, the ballooning stability parameter, $ \alpha_{sep} $ increases with $n_{e,sep}$ until a critical value, $\alpha_{crit}$, is reached after which confinement degrades, similar to JET-C, AUG [2] or DIII-D [3]. However, for the JET-ILW, $n_{e,sep}$ can increase significantly higher, with the plasma being in the dithering phase. Thus, for JET-ILW $\alpha_{sep}\geq\alpha_{crit}$ results in confinement degradation but another mechanism must cause the H-L transition and so the HDL. A new, reliable estimator for JET $E_r$ profiles in the edge has been derived by combining high resolution Thomson scattering (HRTS) measures of edge-SOL decay lengths, with HRTS pedestal gradient measurements. As shown in figure 1a, JET-ILW radial ETB wells are observed with $E_{r,min}$ in the range $-15$ to $-60\ kV/m$ in high performance H-modes, consistent with previous CXRS results of AUG [4]. $E_{r,min}$ for the edge plasma well is observed to vary little between L-mode and dithering phases, figure 1a. The inset figure in figure 1 shows this also the case for a single discharge, #91676, which alternates from dithering phase to L-mode and back to dithering phase whilst input power and global plasma parameters remain relatively constant. In both #91676 and the full dataset, $n_e$ and $T_e$ measured at the well minima are significantly higher (both $>50\%$) for the dithering phase. This implies that a small edge barrier is maintained during the dithering phase and, hence, there is indeed a bifurcation in the plasma state between the two phases. Plasma potential can be estimated as $V_{SOL,u}\approx 3kT_{et}/e+0.71 k\left(T_{e,u}-T_{e,t}\right)/e$, and used to determine the peak SOL E-field, $E_{r,SOL}$ [5]. $E_{r,SOL}$ is generally higher in the dithering phase, figure 2. The inset figure shows that the difference is more outstanding for the phases in #91676. The observed behaviour of $E_{r,min}$ and $E_{r,SOL}$ implies that the positive $E_r$ shear gradient at the separatrix is higher in the dithering phase than in L-mode. The higher positive $E_r$ gradient at the separatrix sustains the marginal phase and enables access to higher density when compared to JET-C discharges which do not enter a dithering phase. The weakening of this positive $E_r$ shear gradient eventually triggers the final H-L back transition. 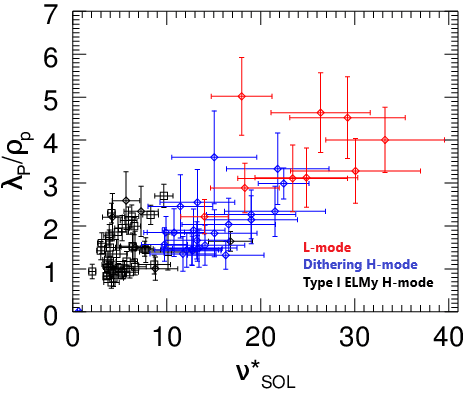 Across a dataset of JET-ILW L-mode, H-mode and dithering plasma, normalised SOL width is found to increase with increasing collisionality, figure 3, in agreement with previous observation on AUG [6] and the Goldston finite collisionality HD model for SOL broadening at high collisionality [7]. A hypothesis for the dithering H-mode phase close to HDL is proposed with H-L-H-L- oscillations following:

The study has shown that, at high density, JET-ILW plasma reach the edge ballooning limit, $α_{crit}$ nd their confinement reduces but without a transition to L-mode. Instead, the higher positive $Er$ gradient at the separatrix sustains a dithering phase, shown to be a bifurcation in plasma state. A hypothesis has been developed for the limit cycle during this phase. Whilst the dithering H-mode phase enables access to higher density ($\approx20\%$) when compared to JET-C discharges, global confinement is observed to be low, $H_{98(y,2)}\approx0.75-0.8$. The observed JET-ILW results suggest ITER can operate in H-mode at higher density, which is beneficial for the power handling issue, but more likely in dithering phase with lower confinement and broader SOL. However, if the plasma exhaust can be handled at sufficiently low densities, operating just below the dithering phase would be a promising regime for maximising core density, global confinement and fusion performance.
[1] A. Huber et al. Nucl. Fusion 57 (2017) 0860007; [2] T. Eich et al. Nucl. Fusion 58 (2018) 034001; [3] A.W.Leonard et al, IAEA-TM 2019; [4] E. Viezzer et al. Nucl. Fusion 53 (2013) 0530005; [5] P.C.Stangeby, ‘The Plasma Boundary of Magnetic fusion devices’ 2000; [6] HJ. Sun et al. Plasma Phys. Contr. Fusion 57 (2015) 125011; [7] RJ. Goldston, 2018, EPS, ‘Generalization of the Heuristic Drift Model of the SOL for Finite Collisionality’