Achieving high-$\beta_N$ for current and future tokamaks is a challenging and important issue, where \beta_N is the normalized toroidal beta. High-$\beta_N$ is beneficial for the ignition and fusion reaction, as well as the ratio of bootstrap current is proportional to $\beta_N$. Recently, on HL-2A a high-performance region, combining edge and internal transport barriers (double transport barriers, dubbed as DTBs), had been obtained by high-power NBI and LHW heating, and shown in the Fig.1. Usually, the internal transport barrier (ITB) forms just after the NBI injection, and the ITB foot locates near q=1 surface where the magnetic shear is weak and the flow shear is significant to suppress effectively turbulence fluctuations. Subsequently, the center/edge ion temperature and toroidal rotation both decrease/increase, meanwhile, the plasma density increases, as a result that the pedestal creates and L-H transition occurs. The ELM-free H-mode sustains around 40 ms with DTBs. Accompany with the density ascending, the type-I ELM emerges and \beta_N reaches maximum at the moment. In this scenario, $\beta_N$ >3.0 is realized, and corresponding $H_{98}$~1.3, $f_{bs}$~30% and G~0.4. Meanwhile, the high-$\beta_N$ scenario has also been successfully modeled using integrated simulation codes, i.e. OMFIT and METIS. A steady-state high-$\beta_N$ (t~0.8s and $\beta_N$ >2.0) scenario is also obtained by the pure NBI.

In such high-$\beta_N$ plasmas, there are abundant MHD instabilities, including low-frequency MHD oscillation and high-frequency coherent mode in the edge, and neoclassical tearing mode (NTM) and Alfvén modes in the core (shown in the Fig.2), as well as complex MHD dynamics, e.g. nonlinear wave-wave and wave-particle interactions. Some new physics problems need yet to be resolved, namely how sustain and control MHD and transport barrier to achieve higher and steady-state high-$\beta_N$. 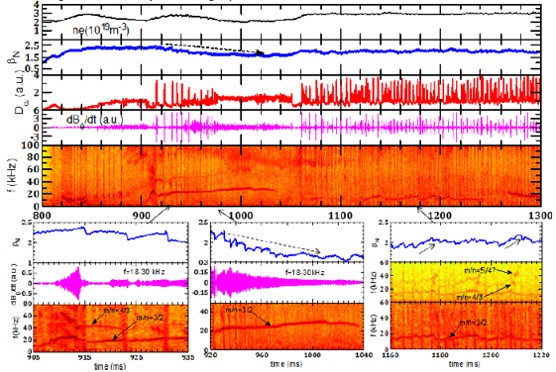