Optimized stellarators promise comparable energy confinement to existing tokamaks. Recent results from the Wendelstein 7-X device are consistent with this possibility. At the same time, stellarators offer considerable advantages, such as disruption-free operation without a Greenwald density limit. On the other hand, transport in optimized stellarators will be dominated by turbulence, unlike earlier stellarators and as in large tokamaks. There is also a large parameter space for configurations which is difficult to explore with experiments. Whole-volume gyrokinetic simulation is a powerful and flexible tool which can be applied to understand existing stellarator experiments and design improved types.

The whole-volume gyrokinetic code XGC has been extended for stellarators, and linear benchmarks for ion temperature gradient-driven modes (ITGs), neoclassical physics, and particle confinement have been published[1-3]. These give confidence in the code implementation, as well as shedding light on timely topics such as the properties of microinstabilities in Wendelstein 7-X. This topic is beginning to be explored experimentally, but observational investigations are incomplete and can be supported and enhanced by numerical modeling. This capability of XGC can be used to guide scenario development and optimization as well as theoretical understanding of linear microinstabilities. In this work, the previous linear capability for microinstability simulations is first extended to the nonlinear regime. As a benchmarking exercise, the stellarator and tokamak versions are compared in a nonlinear tokamak simulation. The equations solved should be equivalent, but the numerical implementation is substantially different, making this a good test of the new nonlinear stellarator modelling capability. In the figure above, the nonlinear evolution of the electrostatic potential by ITG is plotted comparing the two codes. The agreement is almost exact, except for slight differences in the nonlinear phase which are expected due to the stochastic nature of the nonlinear dynamics.

Previous linear simulations of the quasi-isodynamic stellarator Wendelstein 7-X are then used as a point of comparison for linear simulations in the quasi-axisymmetric design QUASAR. The quasi-axisymmetric design is of particular interest because no experimental implementation exists, meaning that numerical simulations provide the best current data on their performance. The figure below shows that the normalised linear growth rate for ITG is roughly equivalent in the two devices for the same normalised temperature gradient strength. This linear result shows similiarity in the linear stability of the two devices despite considerable differences in the three dimensional structure of the confining magnetic field. Having established the validity of the XGC nonlinear model for stellarators, and established confidence in linear simulations of the QUASAR configuration with XGC, this analysis is then extended to nonlinear simulation. The figure below shows the ITG mode structure in terms of electrostatic potential perturbation in the nonlinear phase. Radially extended streamers, as the radically localised temperature gradient profile relaxes, are observed, with comparably strong saturated perturbation amplitude over a much larger proportion of the device poloidally than in the linear regime. The turbulent heat flux has also been calculated. 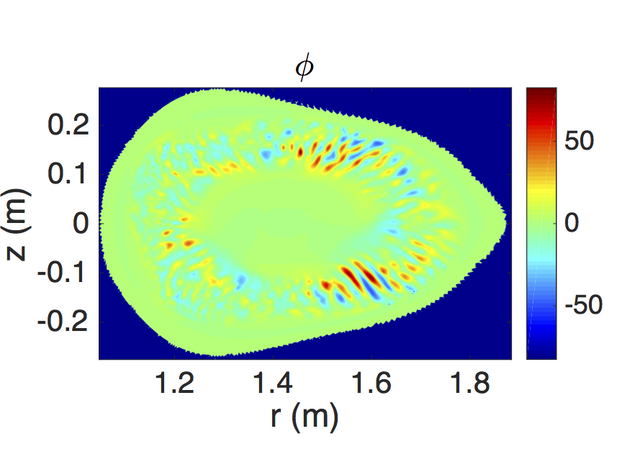 Simulations such as these offer novel insight into the behaviour of turbulence in stellarator devices and the possibility to examine the differences between turbulent behaviour in unbuilt device types. This capability will be used to compare the resistance of different proposed stellarator designs to turbulent transport.