The 2018 ITER Research Plan states that “Operation of ITER will have to strongly focus on avoiding disruptions with a high success rate and on mitigating those in which avoidance techniques fail” (1). The development of a disruption mitigation system for ITER will not suffice. We discuss a nonlinear effect that can allow the RF current drive stabilization of larger islands than would otherwise be possible (2). As we discuss, disruption studies on JET suggest that this could have a substantial impact on the rate of disruptions in ITER. 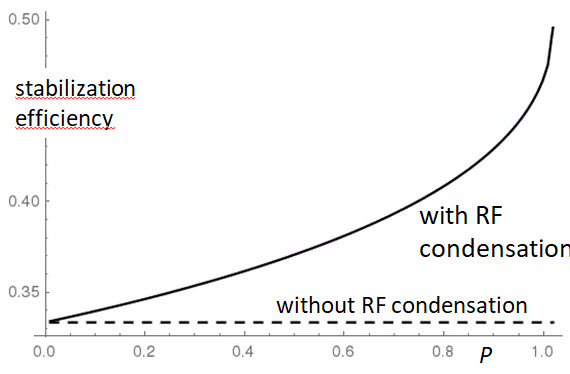 The nonlinear effect that we have identified, “RF current condensation”, concentrates the RF driven current near the island O-point and thereby increases the efficiency of RF current drive stabilization of islands. Fig. 1 shows the predictions of a simple model to estimate the effect of RF condensation on the efficiency. The efficiency metric, the ratio of the resonant component of the RF driven current to the total RF driven current (4), is widely used. The deposition model takes the linear contribution to the power deposition to be a constant inside the island and to vanish outside the island (4). The figure shows the stabilization efficiency as a function of normalized power, $P\equiv W_i^2w^2P_0/(4n\kappa_{\perp}T_0)$, where $W_i$ is the island width, $w$ is the ratio of the wave phase velocity to the thermal velocity, $n$ is the density, $\kappa_{\perp}$ is the cross-field thermal diffusivity, $T=T_0+\tilde{T}$ is the perturbed temperature at the O-point of the RF heated island, and $P_{RF}=P_0\exp(w^2\tilde{T}/T_0)$ is the RF power deposition. This expression for the power deposition is a consequence of the fact that, for electron cyclotron waves and lower hybrid waves, the power is deposited on the electron tail. The expression for $P_{RF}$ leads to a nonlinear thermal diffusion equation in the island whose solution determines the profile of the RF driven current. The efficiency increases rapidly as $P$ approaches a bifurcation point of the nonlinear thermal diffusion equation in the island, above which we must include additional physics to determine the saturation of the temperature. Additional pieces of physics that can saturate the temperature increase are depletion of the wave energy (5) and temperature profile stiffness above the microinstability threshold (6). The efficiency increases further as the power is increased above the bifurcation threshold. Hysteresis behavior arises that can cause stabilized islands to shrink to smaller widths than would otherwise be the case.

In ITER, a relatively small fraction of the available EC power will be used for routine ECCD control of neoclassical tearing modes, stabilizing islands when they are still small to minimize the impact on the power balance. We address the situation where an off-normal event leads to the appearance of a large island that threatens to cause a disruption. In that circumstance, it may be desirable to use all available power to avoid a disruption.

On JET with the ITER-like wall, 95% of the disruptions are preceded by the appearance of locked islands (3). A statistical analysis of JET disruption data has found that there is a distinct island width at which the plasma disrupts, corresponding to a width of about 30% of the minor radius (7). These observations suggest that, regardless of the initial trigger, the islands are playing a key role in initiating the thermal quench. Islands grow on a global resistive time scale. However, ramp-down of a plasma discharge also occurs on a resistive time scale, and it can itself trigger a disruption if it is too fast. One advantage of ECCD stabilization is that it is intrinsically fast. The imposition of RF current drive in a magnetic island produces a stabilizing electric field on an electron-ion collision time (8). There is a longer actuator time scale, but that time scale is still fast compared to the resistive time scale on which the islands grow (9).

The use of ECCD for off-normal event response will involve larger islands and higher ECCD powers than routine stability control. The conventional model used for studies of ECCD active stability control breaks down in this context (2). The conventional model assumes that the local acceleration of electrons is not affected by the presence of the island. This model neglects the sensitivity of the power deposition and electron acceleration to the perturbation of the temperature in the island. There is a nonlinear feedback on the temperature in the island, with the increased power deposition giving rise to a further increase in the temperature. The combination of this with the sensitivity of the RF-driven current to the temperature can produce the RF current condensation effect. The nonlinear effects must be taken into account for aiming of the ray trajectories when large islands are present to avoid a “shadowing” effect that can deplete the EC power before the center of the island is reached.

The RF condensation effect motivates a reevaluation of the potential utility of lower hybrid current drive (LHCD) for island suppression. Although the LHCD deposition profile is intrinsically broader than that of ECCD, LHCD is more sensitive to temperature perturbations, and the condensation effect localizes it. Fig. 2 shows a calculation done with the GENRAY ray tracing code and the CQL3D Fokker-Planck code of the effect of imposed temperature perturbations on the LH deposition at the $q=2$ surface in an ITER equilibrium (10). There is the prospect that a broad LHCD profile used to maintain a steady state tokamak can provide automatic stabilization of islands by RF current condensation. 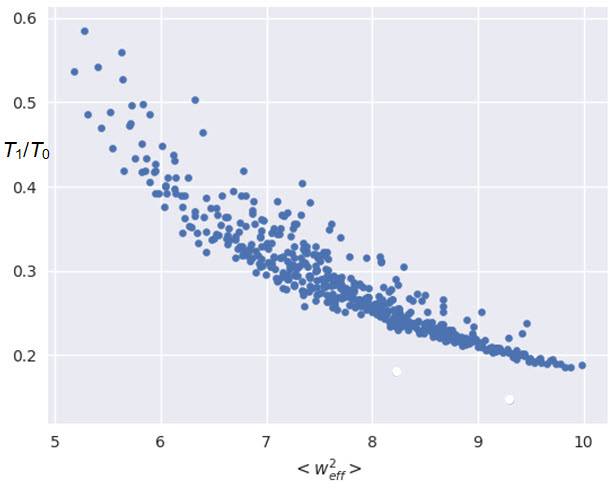 A high fidelity code for simulation of RF condensation has been constructed, with the power deposition along EC ray trajectories calculated by GENRAY, then mapped into a magnetic island. A self-consistent solution of the thermal diffusion equation in magnetic island geometry feeds back to determine the perturbed temperature profiles along the ray trajectories, and the resulting modification of the power deposition. Fig. 3 shows the result of 500 calculations of the bifurcation threshold for a 20% island in an approximate ITER L-mode equilibrium as a function of poloidal and toroidal launch angles and launch position. The perturbed temperature at the bifurcation point has been plotted as a function of a parameter that measures the sensitivity of the power deposition to the temperature perturbation. For each point plotted here, the EC power was incrementally increased until the bifurcation threshold was encountered, with the EC power constrained to lie below 20 MW.