The Lithium Tokamak eXperiment-$\beta$ (LTX-$\beta$), the upgrade to LTX, is designed to utilize low recycling walls and the resultant gradient-free temperature profiles [D. P. Boyle et al., Phys. Rev. Lett. 119, 015001 (2017)] to robustly stabilize ion and electron temperature gradient-driven modes. Low recycling and the resultant low collisionality in the scrape-off layer (SOL) plasma [R. Majeski et al., Phys. Plasmas 24, 056110 (2017)] are also expected to broaden the divertor (or limiter, in LTX-$\beta$) power footprint to reduce peak power handling requirements. In LTX-$\beta$, confinement and the SOL plasma collisionality both depend strongly on global recycling. Global recycling has a strong effect on confinement in many tokamak experiments, yet no systematic study of the variation of confinement with recycling has ever been undertaken. Here we report on the preliminary results of the first such study, in LTX- $\beta$ (Fig. 1). 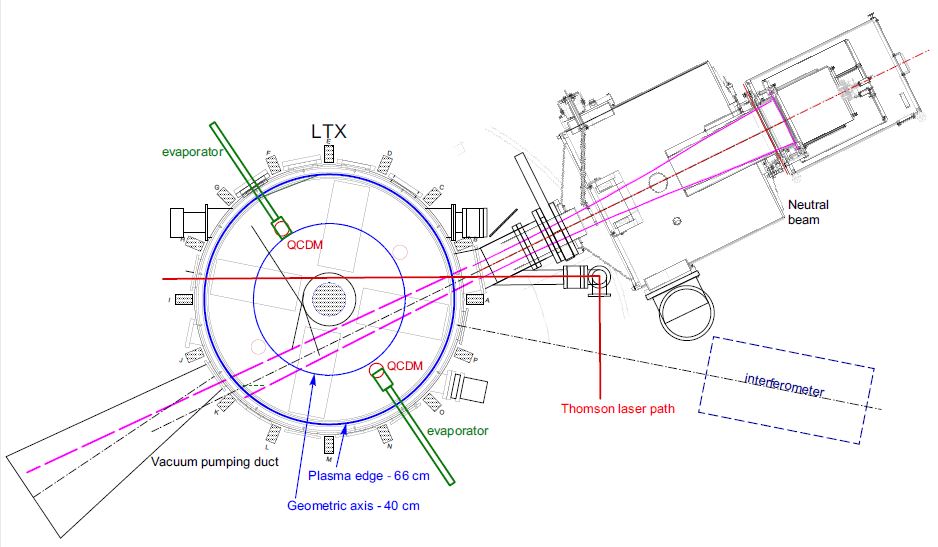 The upgrade has approximately doubled the toroidal field (to >3 kG) and will double the plasma current (to 150 – 175 kA), compared to LTX. Plasma pulse length is limited to ~50 msec. All plasma facing surfaces are coated with lithium, using the new lithium evaporators shown in Fig. 1. LTX-$\beta$, like LTX, employs a heated high-Z liner which can liquefy the lithium coatings, to provide liquid lithium plasma facing surfaces. Short-pulse (up to 6 msec) neutral beam injection has been added - up to 600 kW (35A at 18.5 kV) of neutral beam power has been injected. As of this submission, modifications to increase the plasma current are still underway, and the current is limited to <100 kA, so that neutral beam injected fast ion first orbit losses are significant. Modeling results for the ion orbit losses, along with results at increased plasma current, will be presented. Flat electron temperature profiles were observed during operation of LTX with low recycling lithium coated walls prior to the outage for the upgrade to LTX-$\beta$, and there are now indications that the low field side edge temperature in LTX-$\beta$ increases by 2-3× to ~60 eV within 8-10 msec after gas puffing is terminated (Fig. 2). 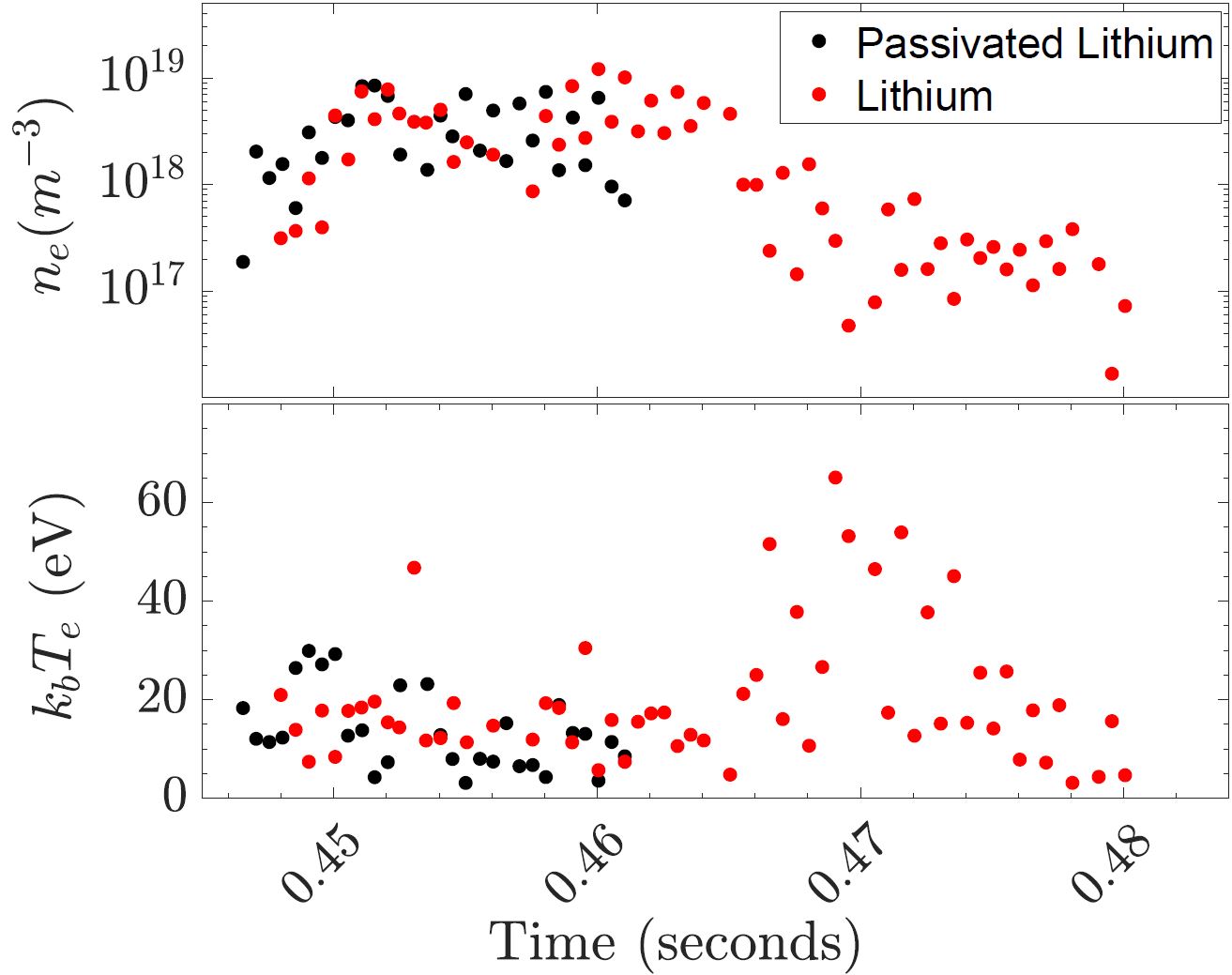 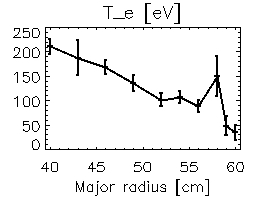 Measurements of the pressure evolution in the torus before, during and after a discharge indicate that the lithium wall retains > 2/3 of the fueled hydrogen. An array of Lyman-α detectors viewing the high field side plasma contact area is being installed, and will be used with DEGAS 2 modeling to determine the recycling coefficient.

LTX-$\beta$ is a collaborative effort, with major participation from Oak Ridge and Lawrence Livermore National Laboratories (ORNL and LLNL), as well as the University of Wisconsin, UCLA, the University of Washington, Princeton University, and LiWall Fusion (a private company). The ORNL Charge Exchange Recombinant Spectroscopy (CHERS) system views lithium impurity light. Initial results indicate that the discharge ion temperature is 40 – 80 eV, for discharges in which the peak electron temperature is 100 – 125 eV.

High field side swept Langmuir probes have been installed, and are providing edge electron temperatures and densities. A “vacuum suitcase” based surface exposure probe is operational. Samples are transferred to an x-ray photoelectron spectroscopy (XPS) facility which shares a building with LTX-$\beta$; the time interval between exposure on LTX-$\beta$ and completion of the surface analysis is ~90 minutes. Continuous vacuum pumping ensures that minimal additional contamination occurs during transfer. UCLA is upgrading the LTX reflectometer and interferometer capabilities for both coherent and turbulent density fluctuation measurements. An upgrade to the frequency-modulated continuous-wave reflectometer will double the previous tracking rate of the density profile, and the same hardware will be used as a high-$k_{r}$ backscattering diagnostic. A new dual-channel tunable fixed-frequency reflectometer will simultaneously monitor density fluctuations at two locations in the plasma core. A new detector will increase the sensitivity of the 1 mm interferometer. Far-forward scattering measurements with this diagnostic will probe density fluctuations with $k_{perp}<2 cm^{-1}$.

The most recent results from LTX-$\beta$ will be presented.