The high-performance operation is one of the major missions of HL-2M [1, 2] for supporting ITER, CFETR and future fusion reactors. Notice that, high-performance scenarios with the large plasma current (2.5-3MA) and the high elongation (1.8-2.0) are normally accompanied by the potential VDEs risk. This requires an efficient and reliable feedback control system, which is under construction. This paper focuses on a standard single-null plasma with the favorable vertical stability (elongation $\kappa$=1.5, minor radius a=0.64, triangularity $\delta$=0.43), and two kinds of expected high-performance D-D scenarios (including the convertional inductive regime of Ip=1.8MA and the hybrid regime of Ip=1.4MA) are investigated, based on the integrated modelling suite—CRONOS [8].
For the conventional inductive H-mode regime of $I_p$=1.8MA / $B_0$=2.2T with the line-averaged density $N_{bar}$ of 9.0×10$^{19}$m$^{-3}$ (Greenwald density fraction $f_G$=0.69), NBI of 15MW combining with ECW of 8MW are implemented. In such condition, the O-mode with the frequency of 105/140 GHz allows the EC wave propagates deeper than the X-mode in the plasma, obtaining the deposition peak around $\rho$=0.4-0.5. Meanwhile, the NBI deposition power on ions is around 4 times of that on electrons in the core, and the total NBI deposition power profile is flat within $\rho$=0.65. As shown in Figure 1, the non-inductive current fraction is 0.34 with the bootstrap current fraction of 0.29. Due to the very low off-axis additional current drive, the current profile gets peaked in the center with $\beta_p$=1.2. The thermal energy of the plasma reaches 2.0MJ with the high $\beta_N$ of 3.0 which is seemed to be compatible with li(3)=0.9 of the peaked current profile for avoiding the resistive wall mode (RWM) instability. Similar to ITER baseline, the q95 can reach 3.0. Both the ion and the electron temperature of the center can reach around 5keV. 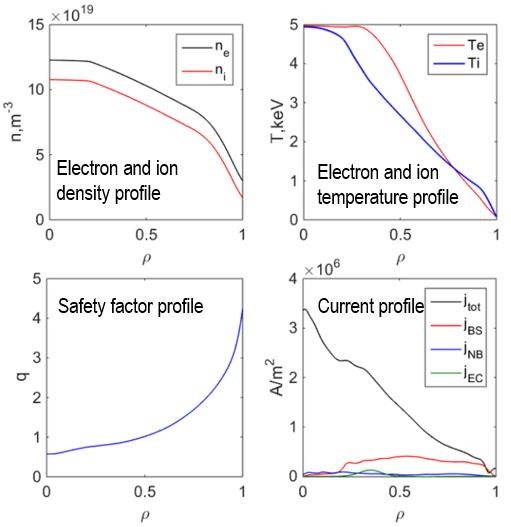 For the hybrid regime of $I_p$=1.4MA / $B_0$=2.2T with $N_{bar}$=4.9×10$^{19}$m$^{-3}$, NBI of 8MW combine with the equatorial ECW (X-mode + 105GHz) of 6MW and upper ECW (X-mode + 140GHz) of 2MW are implemented. In this case, power the deposition peak of NBI is on-axis, while the ECW deposition peak is off-axis. Comparing to the conventional inductive regime, both the bootstrap current fraction and the additional drive current fraction increase. The total non-inductive drive current fraction reaches 0.6. As shown in Figure 2, the substantial increased off-axis drive current allows the magnetic shear to get flat around the center. The center safety factor q0 increases to 1.2 and the minimum safety factor qmin increases to 0.94 with the location of $\rho$=0.35. Such weak reversed shear leads to an internal transport barrier (ITB) generated around the center, allowing the energy confinement to increase. The H98(y,2) reaches 1.3. Similar to the ITER hybrid scenario, q95 in this regime reaches 3.9. The ion and the electron temperature of the center can reach 6.4keV and 8.5keV, respectively. The thermal energy of the plasma reaches 1.4MJ with the high $\beta_N$ of 3.1. Further, the RWM instability of this regime will be thoroughly analyzed by MARS code. 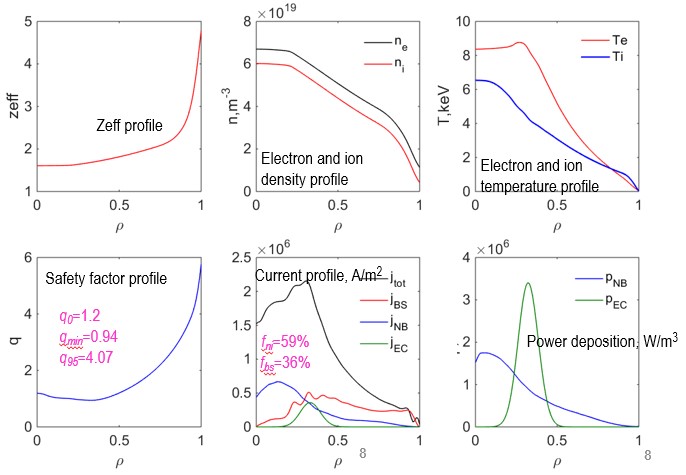 It is worth to notice that the high-performance operation is normally accompanied by the potential heat load issue of the divertor. The power flowing to the SOL region of the conventional inductive regime and the hybrid regime reaches 17MW and 14MW, respectively. It may lead to the great challenge for the outer divertor baffle in the standard configuration. More completely integrated analysis of CRONOS + FEEQS + SOLPS is performing by coupling the boundary condition of the LCFS (shown as Figure 3). The effect, of the impurity injection from the divertor to mitigate the heat load, will be iteratively analyzed with the core operation. Further, high-performance scenarios compatible with the snowflake-minus divertor configuration will be explored. 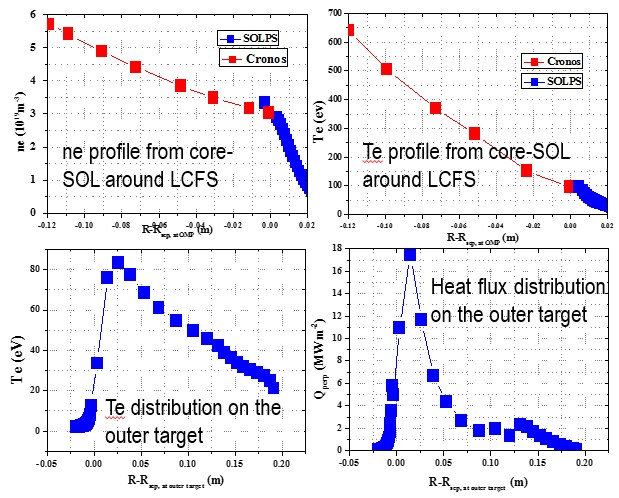