Disruptions can have root causes in density limits, radiation cooling of the edge or MHD instabilities. The latter include external kink modes, tearing modes and Neoclassical Tearing Modes (NTM) that slow down and can eventually lock to the wall {1}. Operating a tokamak with lowest disruption rate is not only a matter of understanding the stability limits of a plasma, but also of developing a robust scenario to prevent/mitigate operator errors and reduce the failure rate of the control and heating systems. In order to preserve the machine integrity of large tokamaks, the number of disruptions must be reduced to a minimum or – better - eliminated. For example, on ITER no disruption shall go unmitigated at current above 8.4MA because of the severity of mechanical loads {2}.

In order to assess robust scenarios on ITER that approach the H-L back transition with minimum disruptivity during the termination phase, we have implemented in TRANSP {3} a scheme to control the burn phase and the current ramp-down phase, which mimics the plasma response to external actuators. Free-boundary transport simulations have been integrated with feedback control on the line averaged density, active control of NTMs {4} and a parametrization for the edge boundary conditions from SOLPS {5}. The latter has been modified from the original to allow dynamic control of seeding impurities and pellet fueling based on estimated values of edge localized modes (ELM) heat load and heat load to the divertor. The pressure pedestal width and height are evolved based on peeling-ballooning stability calculations. These simulations indicate that even for an H-mode exit at current between 12.5MA and 14MA there is a high probability of success to control the plasma until shut-down (see Fig.1). The plasma maintains vertical stability and radial control against the large inward shift that follows the large drop of poloidal beta during the H-L transition. This trajectory is safe within the limits of the transport and stability models used herein and for variations of the input parameters within 20% of the operating point. 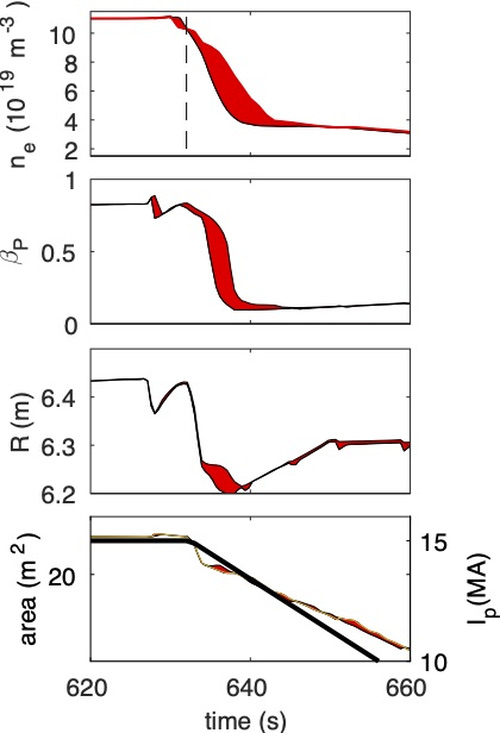 The plasma cross-section needs to be reduced and the plasma centroid guided downward in the ramp-down to avoid vertical instability {6}. For the current rate of 0.21MA/s used here, which is the fastest rate during normal operation, the slowest reduction rate of the plasma cross-section is 500cm2/s. This results from free-boundary calculations that evolve the magnetic equilibrium and the transport in a tightly coupled scheme, with electron density during the H-mode ramp-down phase between 65% and 80% of the Greenwald fraction.
Auxiliary heating is used until the current is reduced to 7.5MA, since ITER cannot ramp-down the current with Ohmic heating only. Since the outer gap increases when the plasma shrinks, the electron cyclotron (EC) system is the only option to provide core heating in L-mode, because ion cyclotron (IC) coupling would be lost.
Sustaining H-mode during the ramp-down has implications for NTM control. The EC Upper Steering Mirror is designed to provide a highly focused beam. During the ramp-down phase the EC deposition broadens and the current drive needed for NTM control increases up to the maximum available. The requirements for NTM control must be compatible with the needs for heating the plasma core, which sets a lower limit on the current of about 12MA. Including all these constraints in the simulations leads to the conclusion that it does exist a safe trajectory requires an H-L transition at 12.5-14MA.
Theoretical models are not mature enough to model self-consistently the density evolution and the transition to/from H-mode in time-dependent simulations for scenario development. This is why designing experiments that mimic the conditions expected on ITER and validating the models against these data is critical for extrapolation.
It is important to notice that – while the control of the external input power is at a mature stage – experience on controlling the self-heating is lacking. Thus, while present-day experiments give us confidence on how to control the plasma current and shape to avoid disruptions due to low-q and vertical stability, the interplay between D-T fueling mix and heating power to access safely the H-L transition is a completely new area, affected by large uncertainties in the modeling.
Experiments on present devices are most needed to inform ITER on how to control the H-L transition in the presence of alpha heating, for example by leveraging the synergy between Ion Cyclotron waves and Neutral Beam fast ions. This is where simulations like the ones described here can guide designing dedicated experiments to inform ITER on how to design robust discharges, from startup to termination.