Chinese Fusion Engineering Testing Reactor (CFETR) aims to bridge the technical gaps between ITER and the first commercial fusion power plant [1]. The physics design of the operation scenarios should provide an integrated solution for the plasma to meet the key mission goals for CFETR subject to engineering constraints. For this purpose the optimization of scenarios and the exploration of operating space have been performed by integrated modeling simulations and system code studies in order to address the outstanding challenges that emerged from previous work presented in the last IAEA FEC.

Previous sensitive study of operating space by system code studies showed there were a reasonable number of feasible operating points for CFETR in steady state with high fusion power [2]. However, there were unresolved gaps between the 0-D design developed by the system code study and the preliminary scenarios developed by the integrated modeling simulations as shown in the last FEC [3]. Compared to the 0-D system study the simulations showed more pessimistic performance and/or more challenging requirements on external actuators such as high external current drive power and deep fueling. Another challenge is that the hybrid scenario and the steady-state scenario required quite different compositions of current drive systems to meet the long-pulse and high-fusion target for CFETR. Recently this problem has been solved by optimizing the pedestal parameters, the current drive techniques and the safety factor profiles in the integrated modeling simulations with self-consistent core-pedestal coupling.

Several new operating points are found in the simulations including a long pulse hybrid scenario and a steady-state scenario both with 1 GW fusion power (see Figure 1 for kinetic profiles). The designed hybrid scenario has a high density plasma (<$n_e$>$_{vol}/n_{Greenwald}\approx1.0$, $n_{e,ped}/n_{Greenwald}\approx0.9$) with good confinement ($H_{98y2}\approx1.2$) and a flattened q profile in the deep core ($r/a$<~0.4). The global ideal MHD modes ($n$=1~8) are stable since the value of $\beta_N$ is moderate, while the size of ELMs at pedestal is small ($ΔW/W_{ped}$<~1%). The steady state scenario relies on higher confinement enhancement ($H_{98y2}$~1.33) to achieve the same fusion power with a lower plasma current and a lower pedestal compared to the hybrid scenario. The confinement enhancement is ascribed to a local magnetic shear reversal at mid-radius ($r/a$~0.5) sustained by local RF current drive and the bootstrap current. It is not necessary to have deep fueling, which was required in the preliminary simulation shown in the last FEC. The position of magnetic shear reversal is optimized to make $\beta_N<4l_i$ for the stabilization of the global MHD modes ($n$=1,2). The pedestal of steady state scenario is expected to be compatible with the grassy ELMy condition [4] since $\beta_P$ is sufficiently high (~2.2) to suppress the more volatile balloonig modes.

A single composition of top-launched high frequency EC waves, helicon waves launched from high field sides and high energy neutral beam with large tangential radius can sustain both the scenarios according to the following consideration. Both helicon waves and high energy neutral beams have demonstrably higher current drive efficiency than EC waves and are useful to reduce the total power requirement for current drive. However, their maximum power will be limited by the available ports through the breeding blankets. Both EC waves and helicon waves can be optimized to drive localized current profiles to sustain the reversed shear in the steady state scenario while the neutral beam current drive profile is quite broad.

Ongoing work in scenario development includes verification of these solutions with models of varying physics fidelity and sensitivity study of the operating points due to the uncertainties in physics and technology. The latter is being performed with iteration between integrated modeling simulations and system code studies.

Based on the above integrated modeling results, new system studies are started using a flexible System Code Framework (SCoF). The framework is being developed to build comprehensible, adaptable and extensible system codes which can incorporate the evolving output from the ongoing design research for CFETR to make comprehensive system studies. The first application of SCoF produces a system code to benchmark the 0-D system study by the GASC code [5] with the output of the integrated modeling simulations. The benchmark shows that the fusion power can be overpredicted in a system code by about 30% if the Shafranov shift is neglected, and by about 20% if simple global polynomial profiles are used to approximate the kinetic profiles for transport evolved H-mode plasma with self-consistent pedestals. The consistency between the 0-D system code study and the integrated modeling simulation can be improved significantly by this benchmark (See the table in Figure 2). 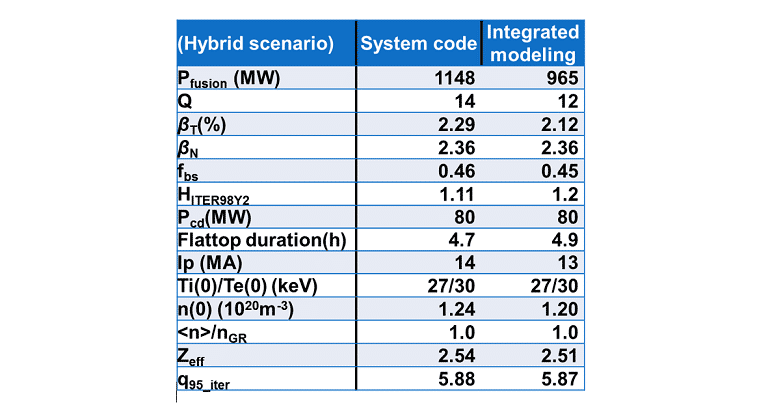 Based on SCoF the system code is then adapted to explore the sensitivity of the operating point of the hybrid scenario. Operating points are calculated with a statistical sampling about a mean value over the ion temperature, the electron temperature, the plasma current and the radius of plasma boundary at the outer midplane (i.e., $R_{out}=R_0+a$) while <$n_e$>$_{vol}/n_{Greenwald}$=1.0 and the composition of current drive power is kept fixed. Increasing $R_{out}$ is an attempt in the recent research to enhance the control of vertical displacement events. The sensitivity study by the system code shows that increasing both the plasma size a and the major radius $R_0$ together (by increasing $R_{out}$) will decrease either the fusion power or the pulse duration $\tau_{flattop}$ (if keeping the fusion power by increasing plasma current $I_p$) (see Figure 3). This behavior is consistent with the recent observation in the integrated modeling simulations.

Further development is ongoing to incorporate more technology modules relevant to the CFETR design and scaling laws of physics components, obtained from detailed modeling, such as the parametric dependences of the pedestal, the efficiency and location for current drives, the characterization of the kinetic profiles with transport barrier in the core and at the edge, and so on. Then a more complete sensitivity study with high fidelity can be performed to estimate the robustness of the scenarios. The implication of these studies for future fusion reactor design is discussed.