This work reports on a breakthrough on the way to a comprehensive modelling of burning fusion plasmas. For the first time, global electromagnetic gyrokinetic PIC simulations of Alfvénic modes have been successfully performed for a high beta ITER plasma.
This finally gives us the ability to model alpha particle driven modes self-consistently in the non-linear regime and to predict the related alpha particle transport with a high level of confidence.
The ITER 15 MA scenario [1], with significant alpha particle pressure, is a scenario in which a broad range of Alfvén eigenmodes may be present. More specifically, a large number of possible of toroidal Alfvén eigenmodes (TAEs) can exist in the plasma, and multiple of these may be driven by the alpha particle gradient. Whilst the induced transport is expected to be small at nominal parameters, it is of significant interest to consider the sensitivity and borders to enhanced transport regimes. Previous modelling of this discharge has been performed (see, for example reference [2] and references therein), most notably by perturbative hybrid (MHD or gyrokinetic eigenvalues and drift- or gyro-kinetic energetic particles), nonperturbative hybrid MHD-kinetic, or local gyrokinetic. Although we know that kinetic, nonperturbative, and global effects are important for the TAEs in ITER, due largely to the difficulties caused by the large size and high plasma β of ITER, it has previously not been possible to apply nonlinear models containing all of these effects consistently. In parallel to this, significant progress [3] has recently been made in global, electromagnetic gyrokinetics, which has yielded e.g. detailed nonlinear studies of energetic particle driven Alfvén eigenmodes in simplified conditions [4]; benchmarks of Alfvén eigenmodes in experimental conditions [5, 6]; and the nonlinear interaction between electromagnetic turbulence and Alfvén modes [7].
The simulations in this work are performed with the ORB5 code [8, 9], a global electromagnetic particle-in-cell (PIC) code using spectrally filtered finite elements for the representation of the fields, with all species considered kinetically, and using the “pullback scheme” [3] to mitigate the cancellation problem.

In this contribution, we present the first application of a global nonlinear electromagnetic gyrokinetic code to address the issue of TAE stability in ITER, focussing first on the linear stability of the modes over a range of mode numbers and gap positions, before looking at the saturation observed when retaining the wave-particle nonlinearity. This is expanded by considering also multiple modes present simultaneously, observing a significant increase of the mode saturation levels by approximately one order of magnitude, and accordingly increased alpha particle redistribution, in a case with double the nominal alpha particle density, and when neglecting the gyro-average on the energetic particles. This is consistent with the finding of previous hybrid modelling [10].

In the linear regime, we observe a range of mode numbers for which there exist multiple eigenmodes, with global mode structures spanning multiple gaps, reflecting what is found with linear eigenvalue calculations. We show that these cases require a global domain to describe the linear mode properties. For more localized mode structures, with higher mode numbers, considering a reduced domain is justified, and we see close agreement, even for nonlinear saturation levels between full and reduced radial domains. 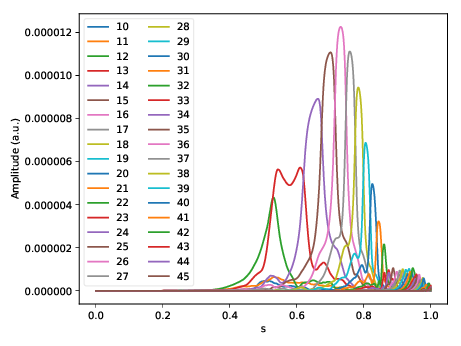 Figure 1: A snapshot of the absolute magnitude of the poloidal harmonics of the electrostatic potential of an n=12 TAE in the linear phase.

In linear simulations without energetic particles present, where we allow an initial perturbation to decay until eigenmodes are observed, we find also different modes present, for example those from the higher frequency gaps (e.g. EAE and NAE), as well as odd-parity TAEs from the upper part of the gap, as these modes (although barely driven in the presence of energetic particles) are weakly damped. An interesting observation is that in the post-saturation phase of the nonlinear multi-mode TAE simulations, we also observe odd-parity TAEs present. This observation motivates a reconsideration of which modes to include for hybrid perturbative simulations of the same scenario, where previously the odd-parity modes were neglected a priori due to the weak drive. 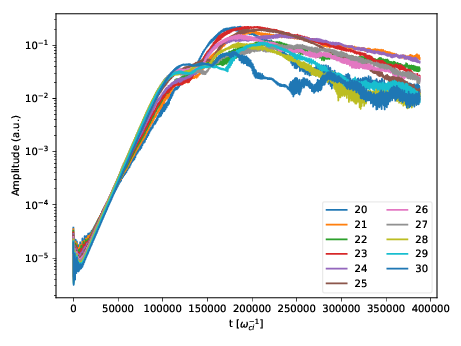 Figure 2: Time evolution of the peak radial values of the different toroidal mode numbers of the electrostatic potential in a nonlinear simulation.

To make simulations feasible, we have allowed several simplifications of the physics problem, but we have considered the impact of each, which we will discuss, in particular, we show the effect of reducing the ion/electron mass ratio.

We also present the application of the ORB5 code to an experimental case taken from an ASDEX Upgrade discharge with particularly interesting energetic particle physics [11], and this result is benchmarked against hybrid codes. The details of this benchmark will be presented in reference [12].

Acknowledgement: This work has been carried out within the framework of the EUROfusion
Consortium and has received funding from the Euratom research and training programme 2014-
2018 and 2019-2020 under grant agreement No 633053. The views and opinions expressed herein
do not necessarily reflect those of the European Commission.