Energetic particles (EP) represent the main source of heat and momentum for burning plasmas. However, EPs can drive instabilities that, in turn, can cause redistribution and loss of EPs. The reduced physics, energetic particle kick model for EP transport enables interpretive and predictive capabilities for time-dependent integrated tokamak simulations including the effects of EP transport by instabilities [Podestà 2017]. Over the last two years, the model has been extended include effects of low frequency instabilities in addition to Alfvénic modes, thus providing a common framework to simulate the possible synergy between different types of instabilities. The model is based on transport probability matrices describing the effects of instabilities in the Monte Carlo module NUBEAM of TRANSP. Matrices are computed for each scenario through particle following codes. The kick model has demonstrated the importance of phase-space resolved simulations of EP dynamics to unravel details of EP transport for detailed theory/experiment comparison [Podestà 2017][Heidbrink 2018] and for scenario planning, e.g. based on the optimization of NBI parameters [Podestà 2019]. Enhancements to TRANSP via the inclusion of the kick model enables scenario development and predictions including realistic treatment of EP transport by instabilities, which is required for reliable and quantitative projections of present results to ITER and next-step devices.

The kick model has been mostly used to simulate the effects of Alfvénic instabilities (AEs) in NSTX/NSTX-U and other tokamaks, enabling detailed studies of the mechanisms driving the instabilities and of the resulting EP transport [Podestà 2017][Podestà 2019]. Recently, the model has been extended to include perturbations such as Neoclassical Tearing Modes (NTMs) [Heidbrink 2018][Bardóczi 2019], sawteeth [Kim 2019] and kink/fishbones [Podestà 2019]. Work is also in progress to extend the model outside the separatrix to include externally imposed 3D perturbations and toroidal field ripple. These developments have resulted in a unique tool to study the synergistic effect of multiple instabilities from the plasma core out to the edge, which can greatly enhance EP transport $\&$ loss and degrade plasma performance.
Figure 1 shows a spectrum of magnetic fluctuations and simulation results from a Neutral Beam heated NSTX-U plasma. Multiple instabilities are destabilized, including toroidal AEs (TAEs), fishbones and kink modes [Podestà 2019]. In the simulations, TAE radial structure and damping rates are obtained from NOVA-K [Cheng 1992][Gorelenkov 1999]. Amplitude of TAEs is inferred by balancing the damping rate from NOVA-K with the drive from NUBEAM [Podestà 2017]. Simple analytic expressions are used for the kink/fishbone radial structure. Their amplitude is adjusted to match the measured neutron rate and stored energy.

‘Classical’ TRANSP simulations that do not include EP transport by instabilities over-estimate the measured neutron rate (Fig. 1b). When both TAEs and fishbones/kink are included, the simulation agrees well with the measurements. By enabling only specific types of modes, their relative role in causing EP transport and loss can be studied (Fig. 1c). Fishbones/kink modes appear to be the primary cause of EP losses. Notably, the loss rate for the case including all perturbations does not equal the sum of loss rates obtained with specific modes only. This indicates a synergy between different modes. The phase space resolution implemented in the kick model enables a detailed analysis of the mechanisms leading to enhanced EP losses. Figure 2 shows examples of root-mean-square energy kicks vs EP phase space for a $n=1$ kink and a $n=4$ TAE mode. Because of their spatial localization, the kink and TAE modes cause larger kicks near the axis and from mid-radius to the plasma edge, respectively. The combined effect of the two modes is therefore to open up an efficient loss channel that connects the plasma core to the edge.
In addition to the effects of AEs and kink/fishbones, the kick model has also been extended to NTMs [Heidbrink 2018][Bardóczi 2019][Yang 2018]. 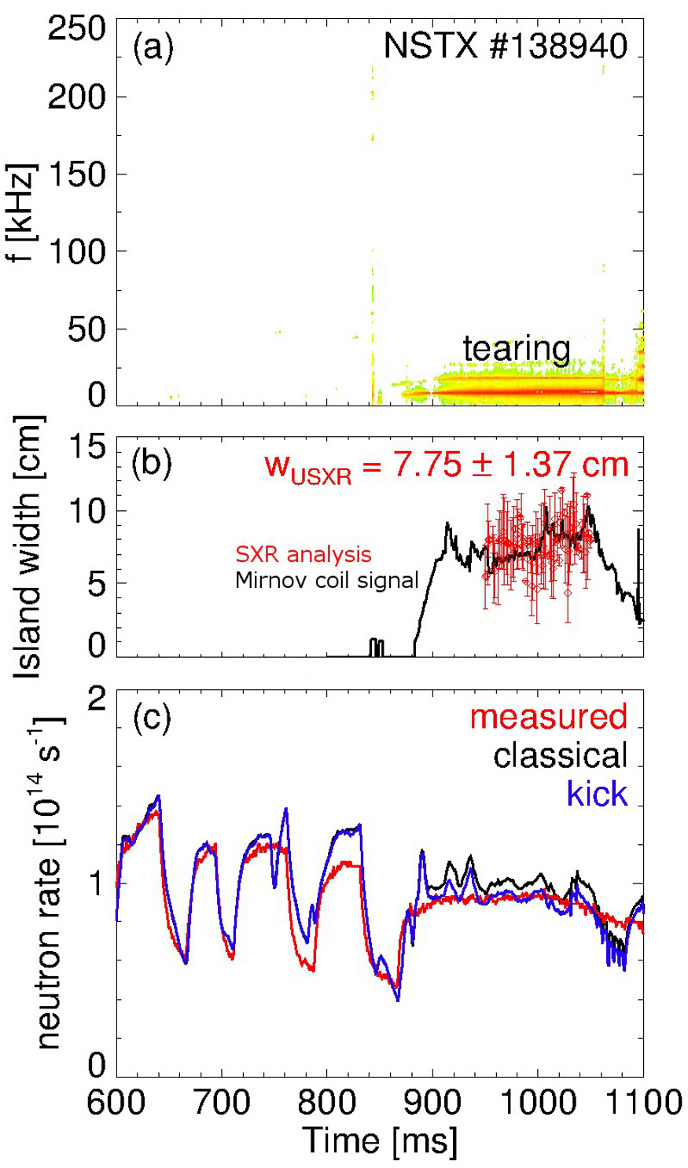 Figure 3a shows magnetic fluctuations for a NSTX discharge in which a 2/1 NTM is destabilized towards the end of the pulse. Analysis of 2D soft X-ray (SXR) emission provides the width of the NTM island (Fig. 3b). Mirnov coil data are then rescaled based on results from SXR analysis, which provides the time-dependent island width information for the simulations. The measured and simulated neutron rate (Fig. 3c) shows that the NTM causes a maximum decrease in neutron rate of $\sim 10\%$ with respect to ‘classical’ simulations. Significant deviation from the classical run is only observed for island width exceeding $\sim 8$ cm, indicating a possible threshold in mode amplitude for EP transport. Below that threshold, the1 mode causes a local EP redistribution with no adverse impact on the overall EP confinement [Yang 2018]. Future work will extend these results to cases with other instabilities in addition to NTMs.
This work is supported by the U.S. Department of Energy, Office of Science, Office of Fusion Energy Sciences under contract number DE-AC02-09CH11466.