Reliable whole device modeling (WDM) of present and future burning plasmas critically depends on correct treatment of the auxiliary heating by energetic particles (EP) introduced into the plasma externally or by the fusion alpha particles. These energetic, or super-thermal, ions can effectively resonate with Alfvénic plasma oscillations, lead to EP losses and modify the profiles of the current drive. For burning plasma experiments, such as in ITER, it is important to not only predict the plasma operational regimes when those instabilities occur, but to learn how to operate in the regimes when the effects of the Alfvénic mode (AM) instabilities are benign. This is possible when all the essence of EP distribution function are accurately evaluated, which is envisioned in recently developed resonance broadened quasi-linear (RBQ) code [1].
We report on the RBQ code development with two dimensional (2D) computational capabilities to compute the distribution function evolution in time. This is an essential element of WDM simulations for self-consistent evaluation of EP distribution function. The RBQ code employs both the ideal MHD computed mode structures and their kinetic growth and damping rates. The velocity space diffusion coefficients in the constant of motion space are the result of RBQ simulations. They are transferred to the whole-device modeling code TRANSP.
RBQ utilizes a self-consistent quasi-linear (QL) theory in the presence of multiple unstable Alfvénic modes in the near-threshold regimes when the resonances between the EP and AM are broadened by a specific value prescribed by the analytic theory [2]. The formulation includes the discrete-resonance collisional functions to broaden the resonance regions for both Krook and Fokker-Planck scattering collisions. These functions are shown in Fig.1(b), which replace a simple resonance delta function that appears in the diffusion coefficient for the case of no broadening. For considered DIIID plasma the resonances are broadened by of the plasma minor radius independent on the mode amplitude. These functions remove a major arbitrariness with respect to previous resonance broadening approaches, which consisted of tuning broadening parameters to match the expected saturation levels [2]. The resonance functions are essential components of the QL model of the code to describe the dynamics of EP distribution evolution, where particle diffusion occurs in both canonical toroidal momentum and particle energy. We verify with the help of the guiding center code ORBIT that the resonances are indeed broadened by the amount determined by the pitch angle scattering frequency. The broadening enhanced by scattering is shown in left Fig.1(a), which shows that the broadened region is insensitive to the resonance island and fully determined by the scattering frequency.
The RBQ simulations find constant of motion diffusion rates for subsequent computation by TRANSP’s NUBEAM package using the probabi-lity density functions. The RBQ code has the capability to efficiently evolve the mode amplitudes simultaneously (in regimes of both overlapping and isolated resonances) while self-consistently relaxing the fast ion distribution function in the presence of collisions in both interpretive and predictive regimes. RBQ employs realistic eigenstructures, damping rates and wave-particle interaction matrices pre-computed by the NOVA-K code. The code in its 1D version was applied to DIII-D critical gradient experiments in predictive mode and reproduced the observed hollow fast ion radial profiles within the experimental uncertainties [1]. Examples of EP distribution function with and without canonical momentum diffusion computed by RBQ1D are shown in Fig.2.
The EP diffusion dependence across the resonance region allows the RBQ to compute the amplitude evolution which can exhibit oscillating, intermittent and saturated state behavior depending on the pitch angle scattering rate. This can be clearly observed in experiments when only few Alfvénic modes are excited such as in DIIID [3] and TFTR [4].
Our work reports on time-efficient, realistic simulations of fast ion redistribution and losses in tokamaks in presence of Alfvénic instabilities and their implementation in WDM using TRANSP. The RBQ code is upgraded to include 2D constant of motion diffusion with the goal to include simulate and design the burning plasma experiments, such as ITER. An important element of such simulations is to understand how tokamak devices can operate with unstable but benign Alfvénic instabilities. Another goal is to predict the current drive by beam ions and fusion products.
References
[1] N.N. Gorelenkov, V. N. Duarte, C.S. Collins et al., Phys. Plasmas 26 (2019) 072507.
[2] V.N. Duarte, N.N. Gorelenkov, R.B. White, H.L Berk, Phys. Plasmas 26 (2019) 120701.
[3] M.V. Van Zeeland et al., “Modification of Alfvén Eigenmode Drive and Nonlinear Saturation Through Variation of Beam Modulation in DIII-D”, IAEA TCM 2019, Shizuoka, Japan.
[4] K.L. Wong, R. Majeski, M. Petrov et al., Phys. Plasmas 4 (1997) 393. 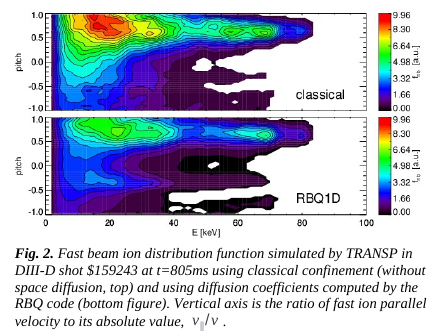