Analysis of “super H-mode” experiments on DIII-D shows that high rotation, not high pedestal, plays the essential role in achieving very high energy confinement quality ($H_{98y2}$ > 1.5) $^1$. While the stored energy increases as expected with higher pedestal, the energy confinement quality mainly depends on the toroidal rotation (figure 1). At moderate rotation, similar to levels expected in ITER, very high pedestal height only yields marginal confinement quality improvement relative to standard H-mode. The dependence of the thermal energy confinement quality on the toroidal rotation is similar to that observed in the DIII-D advanced inductive scenario (also called hybrid scenario), which is typically characterized by high normalized fusion performance at high rotation, but suffers strong confinement degradation at low rotation $^2$. Linear gyrofluid and nonlinear gyrokinetic transport modeling confirm that the effect of E×B turbulence stabilization is far larger than other mechanisms, including EM stabilization and so-called hot-ion stabilization ($T_i/T_e$), as well as the fast ions effect. 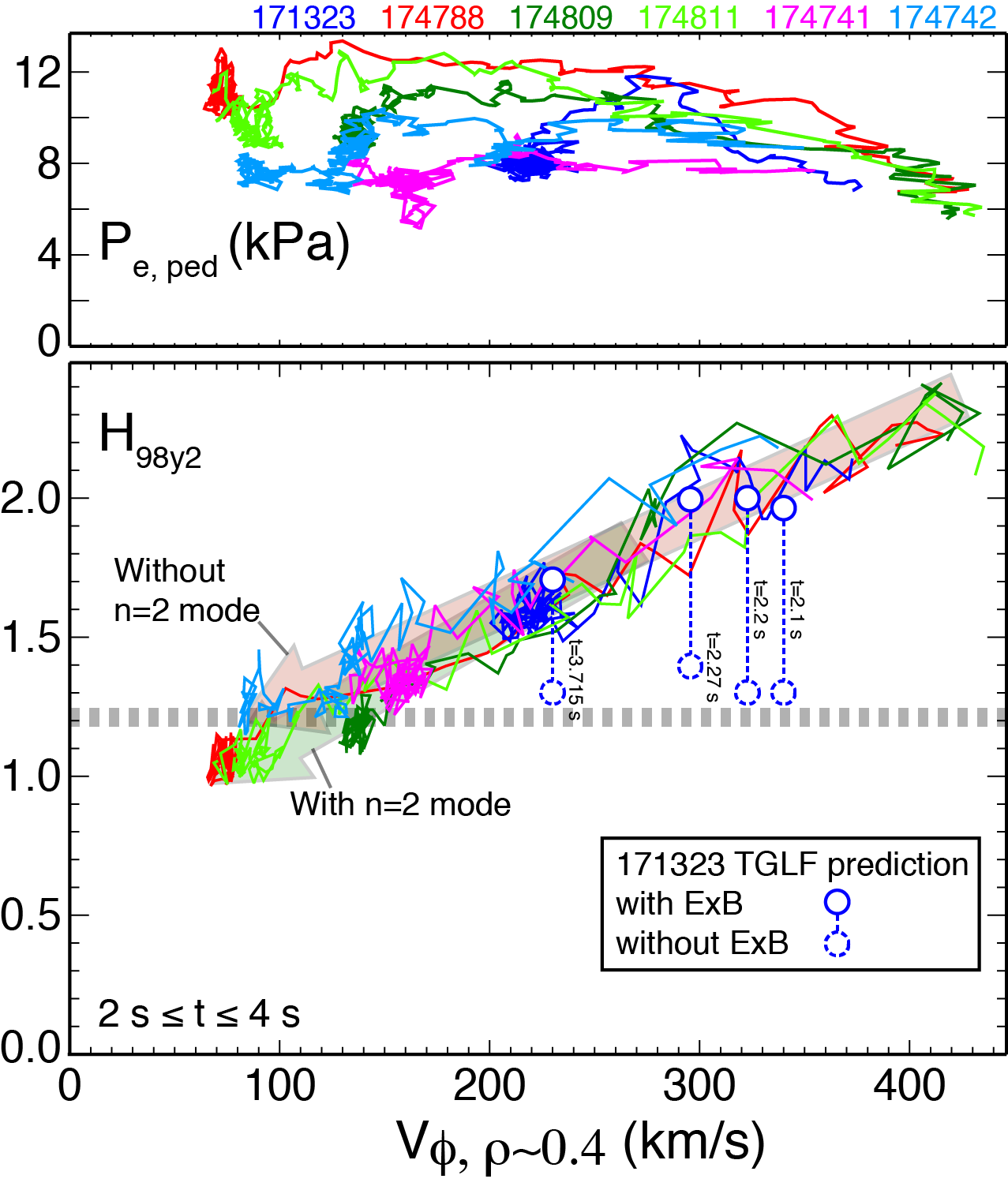 Figure 2 shows that linear gyrofluid modeling achieves a good match of the experimental observations by including the toroidal rotation and related E×B shear. The temperature reduction that results from removing the E×B effect in the simulation is calculated to decrease $H_{98y2}$ from 1.7 to 1.3. Similar analysis was repeated for several time slices in the same discharge, and all the calculated $H_{98y2}$ with and without ExB effect are reported in Fig.1 (blue circles), showing a similar prediction of the energy confinement quality without rotation, for time slices with different experimental confinement values. Note that all cases without ExB shear are slightly higher than the empirical “low rotation” $H_{98y2}$ (the dashed line shown in Fig.1) and this over-prediction may be due to having a fixed boundary condition at the pedestal in the modeling. Figure 3 shows an example of nonlinear gyrokinetic modeling exploring both the effect of the ExB shear and of the $T_i/T_e$ ratio. A large change in the normalized ion energy flux is predicted when the E×B effect in the simulation is removed. Little effect is predicted when the $T_i/T_e$ ratio is increased from the experimental value during the stationary confinement phase, ~1.16, to the peak value achieved in the discharge, ~1.32. 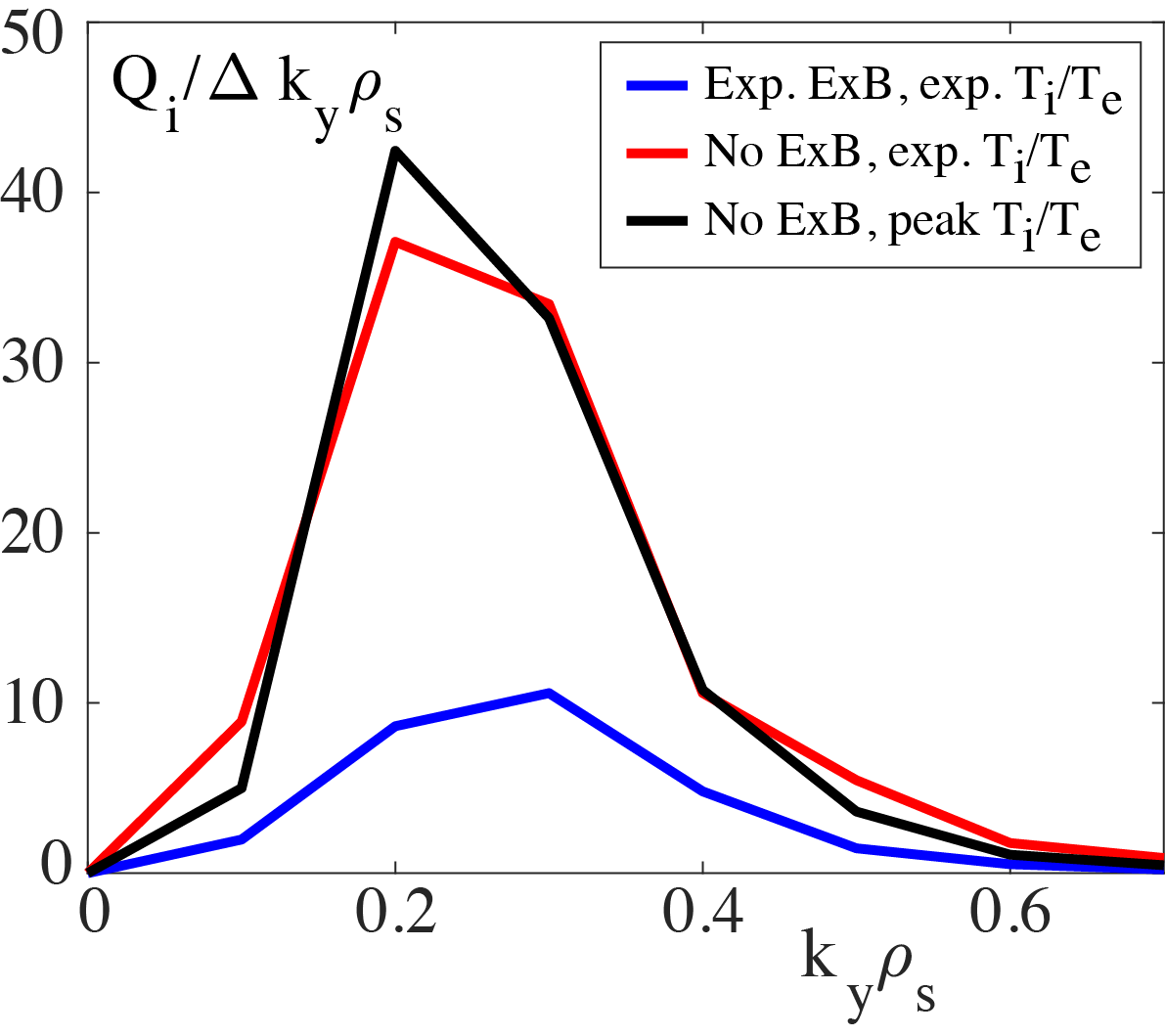 In conclusion, super H-mode plasmas can achieve very high energy confinement quality when accessed following a large neutral beam torque injection that transiently drives very rapid plasma toroidal rotation during and shortly after the L- to H-mode transition. As the density increases during the H-mode and super H-mode phases, the rotation decreases. With rotation closer to reactor-relevant levels, most of the confinement improvement over standard H-mode is lost, despite sustained very high pedestal pressure. Further studies on how to improve the energy confinement at low rotation will be key to the development of super H-mode scenario for a high performance fusion reactor.