Novel internal measurements and analysis of ion cyclotron frequency range fast-ion driven modes in DIII-D are presented which advance understanding of the dynamics controlling mode stability and thereby the physics basis for prediction of fast-ion (e.g. alpha) transport in burning plasmas. Observations, including internal density fluctuation ($\tilde{n}$) measurements obtained via Doppler Backscattering (DBS) [1], are presented for two classes of instability: modes at $f \sim 0.6 f_{ci}$ (Fig. 1) and modes at low harmonics of $f_{ci}$. The former are identified as global Alfvén eigenmodes (GAE) (never before reported in a conventional tokamak) and the latter as coherent Ion Cyclotron Emission (ICE—so named because until now observations have always been via external RF antennae [2]). Both modes are excited by Doppler-shifted cyclotron resonance with fast-ions and observation of these modes in an experiment reveals the creation or movement of velocity-space inversion features in the distribution of fast-ions. Multiple aspects of the theory for this instability mechanism are validated. Highlights include: 1) a fast-ion density stability threshold is demonstrated for the GAEs [3] utilizing a unique DIII-D beam capability, consistent with a fundamental theoretical expectation that mode stability is controlled by competition between damping from various processes (e.g. Landau damping) and the drive from fast-ions; 2) recently developed analytic theory [4] predicting the frequency range for unstable GAEs is supported; 3) simulations [5] show unstable GAEs with frequencies and toroidal mode nubmers similar to experiment; 4) observations of ion-cyclotron harmonic $\tilde{n}$ in the core (Fig. 2) challenge a prevalent theory (see [6] and references therein) predicting the spatial localization of modes, and 5) simulations of edge ICE observations [7] from a DIII-D H-mode plasma agree well with experimental measurements from edge magnetics. Analysis of the ion-cyclotron harmonic $\tilde{n}$ observations is also presented leveraging the theory for the instability mechanism to advance understanding of ELM-induced fast-ion transport. 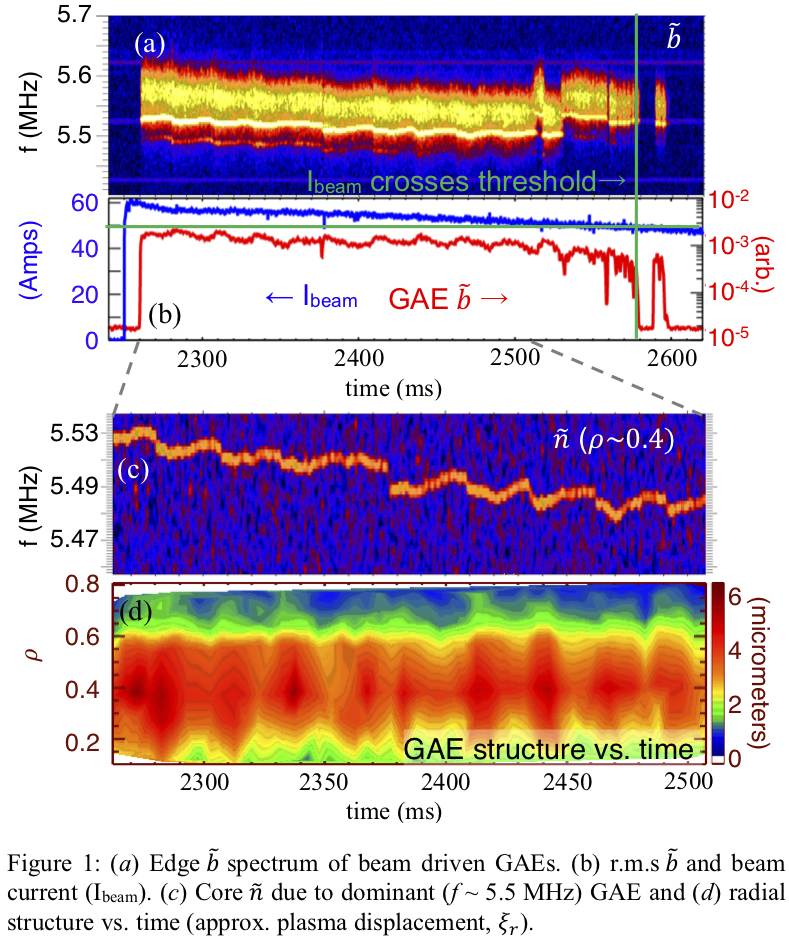 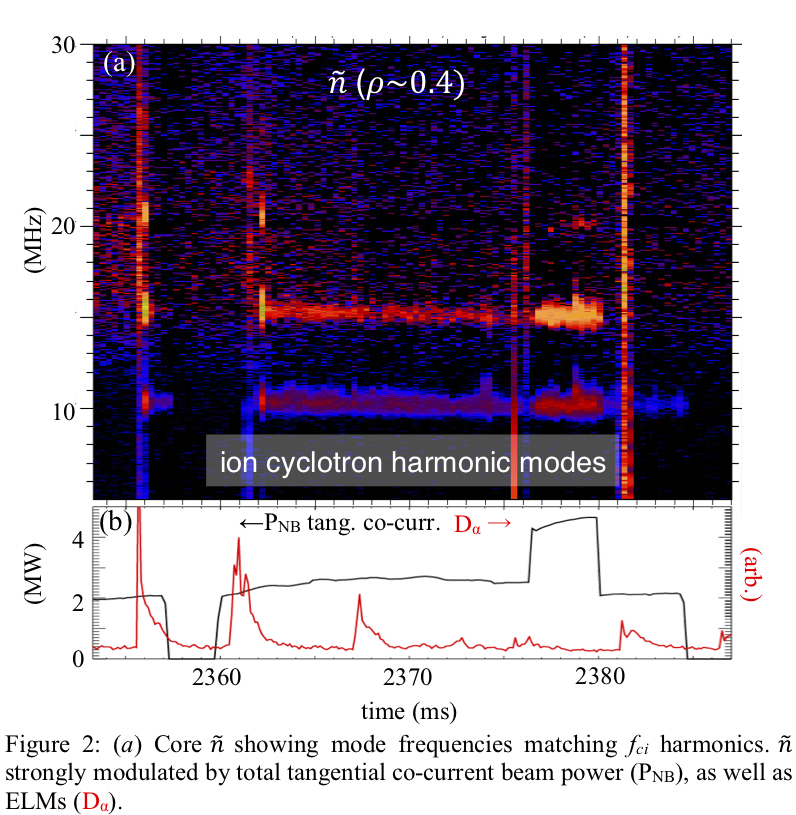 A fundamental element of stability theory for fast-ion driven modes is validated in an experiment demonstrating a fast-ion density threshold for fast-ion driven modes [3]. The modes, with frequencies $\sim 5.5 - 5.6 \text{ MHz} \sim 0.6 f_{ci}$ (Fig. 1a), are excited by off-axis nearly perpendicular beam injection. Using a unique DIII-D beam capability, beam current is slowly ramped down (Fig. 1b) at constant voltage in order to change the resonant beam ion density without significantly changing the resonance itself. The slow ramp is designed to create an approximately self-similar fast-ion distribution (neglecting initial transients at beam turn-on) changing only by a scale factor over time. The mode is abruptly stabilized as beam current crosses below a threshold of ~ 49 A (Fig. 1b), consistent with the expectation for a stability threshold set by competition between fast-ion drive and mode damping processes. (Note that a sawtooth briefly re-excites the mode after the initial stabilization. Note also that the mode frequencies sweep downward slowly as beam fueling increases density, and sawtweeth modulate the frequencies on a ~ 25 ms time-scale.)

The modes in Fig. 1 are identified as Doppler-shifted cyclotron resonant GAEs by analysis of the fast-ion distribution for destabilizing resonances, taking into account measurements of the toroidal mode number (via external magnetics) and internal mode structure. Fig. 1c shows a spectrum of core measurements (via DBS in reflectometry mode) with a narrow peak corresponding to the dominant GAE. Fig. 1d shows the time-dependent amplitude and radial mode structure, which is broad, obtained from a spatial array of simultaneous measurements. The identification is consistent with recently developed analytic theory [4] which, for these experimental conditions, predicts GAEs to be unstable in a narrow range of frequencies, $0.5 < \left. f \middle/ f_{ci} \right. < 0.7$. The identification is also consistent with simulations using the Hybrid MHD code (HYM, [5]) for the experimental conditions. The simulations found unstable, core-localized Doppler-shifted cyclotron resonant GAEs with mode numbers close to the measured value and $f ≳ 0.6f_{ci}$.

Unique observations of fast-ion driven modes with frequencies above $f_{ci}$ ($f \sim 10 - 50$ MHz $\sim 1 - 5 f_{ci}$) test numerous aspects of theory. Measurements of $\tilde{n}$ are obtained in a variety plasma conditions via DBS inside the plasma across a broad spatial range, giving mode amplitude and structure. Observed frequencies can match low harmonics of edge and core $f_{ci}$. Fig. 2a shows an example from an H-mode plasma which poses a challenge to a prevalent theory that predicts the modes to be radially localized close to where mode frequency matches a harmonic of $f_{ci}$ (see [6] and references therein). Fig. 2a shows a mode at $f \sim 15$ MHz, matching $f_{ci}$ on axis as expected, but it also shows modes at $f \sim 10$ and 20 MHz, unexpectedly matching the 1st and 2nd $f_{ci}$ harmonics at the edge. Simultaneous measurements at multiple radial locations show that the 10 MHz mode is actually core localized. Simulations with the EPOCH code test theoretical and computational analysis of ICRF modes, which indicates the central role of velocity-space population inversion for fast-ions for which $v_\perp \sim v_{Alfvén}$. Simulations of related edge ICE ($f ≥ f_{ci}$) observations from a DIII-D H-mode plasma agree well with experimental measurements from the magnetics, down to the level of the relative amplitudes of the first four ICE spectral peaks [7].

The observations in Fig. 2 also test other aspects of theory. The mode amplitudes strongly increase with total power from two beams injecting (nearly) tangentially in the co-current direction (Fig. 2b) at ~ 80 keV. However, the amplitudes are insensitive to power from beams with other injection geometries (e.g. co-current nearly perpendicular). This sensitivity to injection pitch and direction is consistent with expectation for the Doppler-shifted cyclotron resonance mechanism. The rapid switching on/off of the beams reveals a dynamic consistent with another aspect of the theory. In the ~ 10 ms period after each step-up in beam power, the mode amplitudes surge and then decay. This time scale is comparable to a fast-ion slowing down time, during which the high energy part of fast-ion distribution evolves from an initial bump-on-tail, with a positive energy gradient favorable to mode excitation, to a slowing down distribution, with a negative gradient. Fig. 2b also shows that ELMs transport fast-ions in the resonant region of phase space. In particular, when an ELM occurs during injection, the modes are transiently excited, consistent with the expectation that these modes can be excited by fast-ions ejected by MHD events [2].

In conclusion, these results strengthen the physics basis for predicting fast-ion driven mode activity and concomittant fast-ion tranport in future burning plasmas. Comparisons of experiment with analytic theory and simulation show areas of agreement, building confidence in the predictive power of these tools. Observations of ICE advance understanding of ELM-induced fast-ion transport.