Improved understanding of the mechanisms that govern thermal transport in the pedestal region is crucial for determining the fundamental processes behind the L-H transition and pedestal structure, and providing a foundation for predicting and optimizing the pedestal and performance of future devices such as ITER. We report world first inferred ion and electron heat fluxes in the pedestal region of deuterium plasmas using direct measurements of the main-ion temperature for power balance across ion collisionalities between 0.1 and 1.2. The ion heat flux (Qi) in the narrow H-mode pedestal, evaluated in the last 10% of the ELM cycle on DIII-D H-modes is compared with neoclassical transport simulations from the NEO code (1), showing agreement within a factor of 2 at higher collisionality (v*~1.2), but increasing anomalous transport as the collisionality is decreased (Fig 1a). This discrepancy suggests that turbulent transport becomes increasingly important for ion thermal transport in the pedestal at lower collisionalities.

Accurate assessments of the ion heat flux on several devices has historically been impeded by anomalies in the impurity charge exchange recombination spectroscopy (CER) temperature measurements near the plasma edge and relying on the assumption that the main-ion temperature is equal to the impurity based measurements. This can lead to a large ion-electron collisional exchange term that produce physically suspicious negative ion heat fluxes near the plasma edge, with a corresponding attribution of excessive transport through the electron channel. The development of main-ion CER (MICER) in the pedestal region on DIII-D (2,3) has allowed direct measurements of the D+ temperature which is free from these anomalies and improves the interpretation of both ion and electron transport inferred from power balance calculations. The main-ion measurements show significant differences compared with the impurities in the H-mode transport barrier. In particular, there can be large (>2x) differences between the main-ion and impurity temperatures measured in the steep gradient region. These differences are contrary to expectations based on equilibration time. Many of the discrepancies at the pedestal top are resolved by including Zeeman and fine structure broadening of the impurity measurement. In the steep gradient region increasingly accurate calculations of the ion motion may be needed to understand the charge exchange signals, this is being accessed using the SPIRAL code. Use of direct main-ion measurements for the temperature profile in the steep gradient region can have large impacts on the ion heat flux when assuming the main-ion temperature is the same as the impurities (Fig 2a) as opposed to using the direct measurements (Fig 2b). Additionally, the use of the steeper main-ion temperature gradient has the potential to impact the stability of microturbulence calculated in gyrokinetic simulations. 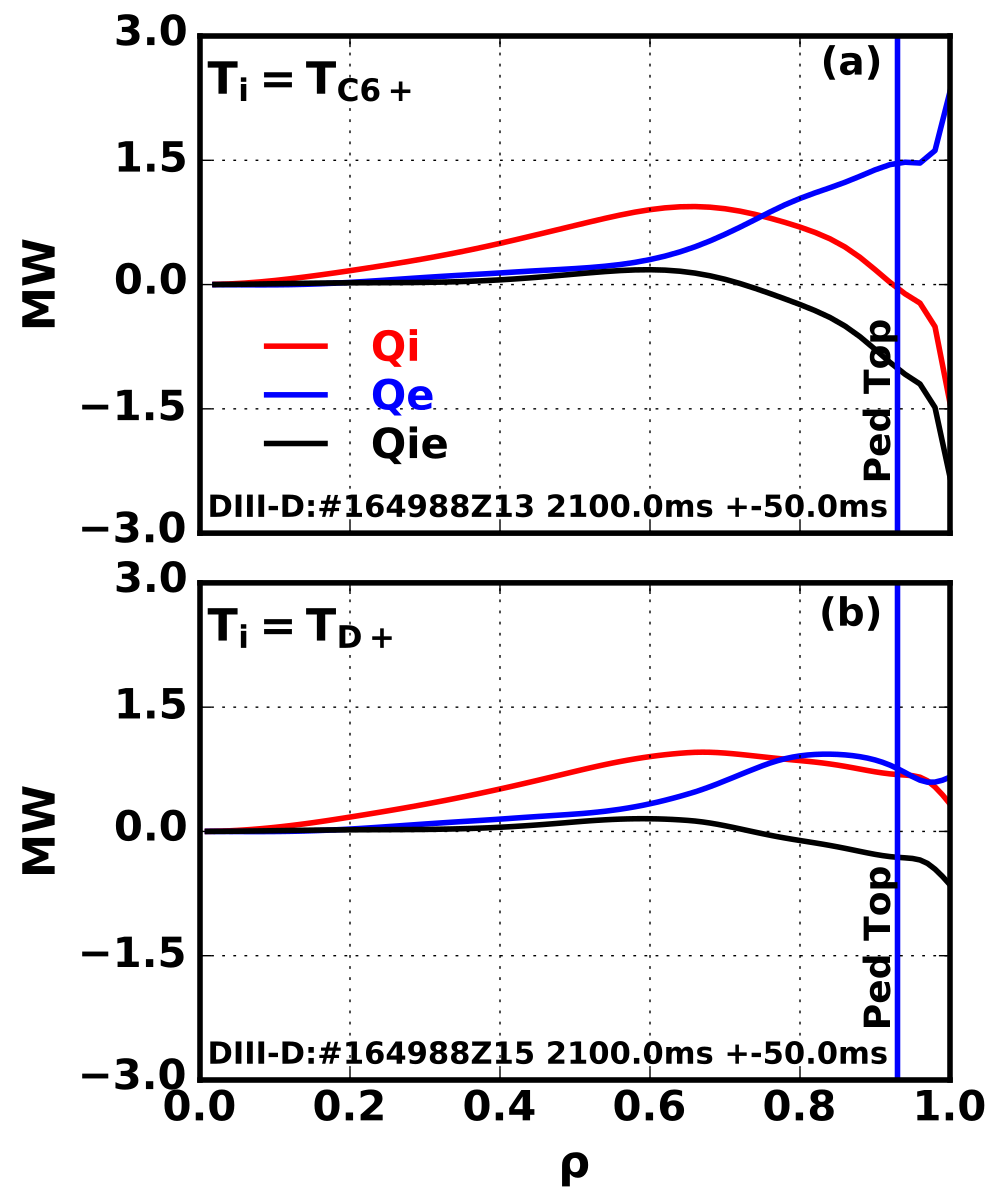 A dedicated experiment was run to acquire these new measurements across a range of collisionalities, providing the inputs to interpretive TRANSP calculations of the ion (and electron) heat flux using conditionally averaged profiles from 90-100% of the ELM cycle. The inferred ion thermal transport in the steep gradient region of the H-mode pedestal rises above the neoclassical level as the collisionality is decreased (Fig 1a) suggesting that anomalous ion thermal transport becomes increasingly important at low collisionality conditions relevant to the range expected in ITER. BES measurements show increasing ion scale fluctuations in the pedestal region as the collisionality is reduced (see Fig 1b) suggesting increased ion scale turbulence may be responsible for the anomalous ion thermal transport.