Understanding impurity transport within fusion research plasmas is of critical importance as progress is made toward burning plasmas. High core impurity concentration can have a deleterious effect on plasma performance: fuel dilution (for fully stripped low Z impurities), triggering of MHD instabilities, or increased core radiated power (for high Z impurities), thus hindering the achievement of stable long-pulse, high energy confinement discharges. A full understanding of impurity transport conditions is especially crucial when observations from multiple devices display significantly different results to what is presumably a similar set of conditions. The effects of evaporated lithium on the NSTX lower divertor and the effects of lithium powder injection were primarily evidenced in the edge/pedestal region where changes in the electron pressure profiles resulted in ELM free operation1. This state however did not lead to an enhanced lithium presence in the core with concentrations rarely rising above 0.1%. Lithium aerosol injections into DIII-D2 discharges utilized 90% less material, but were also successful in generating 300 ms ELM free periods and enhanced pedestal pressures. However these discharges saw substantial penetration of the lithium into the core plasmas, with measured concentrations up to 15-20%. New experiments combining the introduction of lithium and boron powders counterposed with carbon and lithium granule injections have shown the ability to manipulate the core carbon concentration to levels both higher and lower than those observed in reference discharges allowing a comparison with neoclassical impurity transport theory. 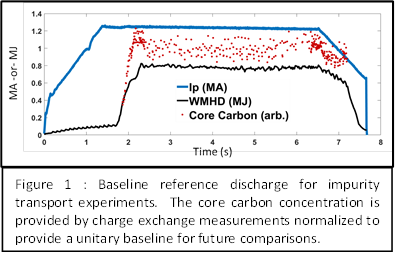 According to neoclassical theory, carbon will act as the dominant impurity and screen out lower-z impurities above a threshold concentration. To determine if a carbon threshold effect can mitigate core lithium penetration, powders and granules were introduced into DIII-D ITER baseline discharges with IP = 1.3 MA, BT = -1.7 T, ne = 8x1019 m-3, PNBI = 9.5 MW and N = 2. Powders are gravitationally dropped into the upper edge of a lower single null H-mode discharge by means of an impurity powder dropper (IPD)3 and granules were horizontally injected into the discharge utilizing an impurity granule injector (IGI)[4]. A reference discharge shown in Figure 1 displays a rapid increase in core carbon concentration during the transition to H-mode which stabilizes to a near constant signal intensity that is maintained during the discharge.
To modulate core carbon concentration the two actuators were utilized separately. Core carbon levels were increased by injection of 400 micron vitreous C granules 2.5 – 4.5 s at mass injection rates of 6 and 4 mg/s, respectively. Measurements of core carbon impurities saw the signal levels start to rise at approximately t = 3 s with the higher injection rate reaching a saturation point after 300 ms. Saturation occurs at an intensity twice that of the baseline level as seen in panel 1 of Figure 2. These results are contrasted with those seen from Li powder injection. For these cases, the introduction of lithium powder caused a prompt reduction of the carbon signature by a factor of 4x which was maintained for the duration of the injection event before returning again to the baseline level. The introduction of Li powder also had a marked effect upon the ELM cycle, with the higher level of injection resulting in extended periods of ELM free behavior as seen in figure 3. These results are consistent with previous reports of Li powder injection2. 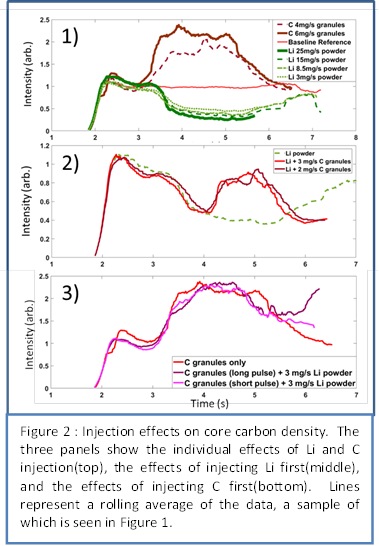 To determine if the lithium buildup within the DIII-D core plasma during Li dropper operation can be flushed by carbon microgranule injection a combination of the two actuators was used. As is shown in panel 2 of figure 2, Li powder is utilized to drop the core carbon concentration prior to the introduction of carbon granules. Carbon levels are seen to increase during the period of C injection from 3.5-4.5 s. However, once the granule injection is stopped the C signal returns to the Li suppressed baseline level rather than remaining at the standard carbon level, thus demonstrating a substantial pumping effect by the lithium leading to the observation that this carbon level does not provide an impurity screening effect. In contrast, panel 3 shows the results when the two actuators are temporally swapped. The long carbon granule pulse is active from 2.5-6 s while the short lithium powder pulse is active from 2.5-5 s. At these elevated carbon levels the Li aerosol does not seem to be able to have a substantial effect on the core carbon intensity, thus there is the possibility that a carbon transport barrier has been established. While increasing the Li powder rate may overcome this barrier, these discharges are already at a substantial impurity fraction and it was observed in subsequent injections with boron powder that larger impurity injections lead to a premature discharge termination event. 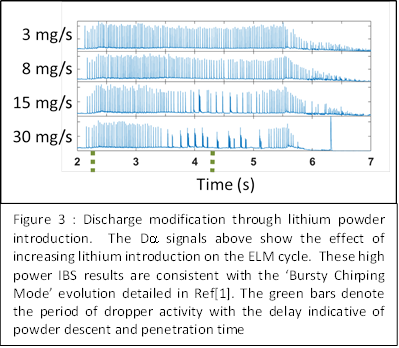 As can be seen from these results, there is a complex interplay between the impurities present within the plasma core dependent upon both the species of impurities introduced as well as the order in which they are deposited into the discharge. These measurements provide benchmarking data for neoclassical transport codes such as NEO and XGC to help determine if the corresponding variations in impurity transport can be explained by simulation and will inform favorable transport conditions in future tokamaks.

This material is based upon work supported by the U.S. Department of Energy, Office of Science, Office of Fusion Energy Sciences, using the DIII-D National Fusion Facility, a DOE Office of Science user facility, under Awards DE-FC02-04ER54698 and DE-AC02-09CH11466