A portable and interpretable data-driven algorithm for disruption prediction has been developed and installed in DIII-D and EAST Plasma Control Systems (PCS). The Disruption Prediction via Random Forest (DPRF) algorithm guarantees explainable predictions in real-time thanks to the feature contribution analysis [Rea2019], which is able to identify the main drivers of the disruptivity – the probability of an impending disruption – potentially informing the PCS on the proper actuators. DPRF was tested in closed-loop mitigation experiments on both DIII-D and EAST tokamaks. On DIII-D, indicators of plasma temperature, density and radiation based on profile peaking factors [Pau2018] were successfully implemented in real-time and used as input features in DPRF during recent experiments.

DPRF is based on the Random Forest machine learning algorithm, which estimates the probability of an impending disruption, i.e. disruptivity, by developing a large number (~ hundreds) of independent, de-correlated base learners (models), thus collecting a parallel set of predictions. The final prediction from the ensemble is aggregated by averaging this very large number of models’ predictions. A calibrated threshold on the disruptivity is then found to maximize the success rate and warning time [Montes2019]. While it is necessary to provide enough warning time to predict an impending disruption, it is crucial to also diagnose what type of event in the disruptive chain is causing the deviation from the safe operational space. This allows the PCS to respond adequately to different instabilities by directing it to trigger different actuators. 1D/2D profiles of plasma temperature, density and radiation contain highly predictive information that can be used for example to diagnose impurity accumulation events leading to radiative collapse and therefore disruptions. Reducing profiles to their peaking factors (following what documented in [Pau2018]) handles the curse of dimensionality and represents a manageable and real-time compatible way for a data-driven algorithm to augment predictive capabilities. In addition to these synthetic diagnostics, other 0D (where time is their only dependence) and mainly dimensionless input features were used to train the machine learning-based algorithm on DIII-D, consisting in data coming from equilibrium reconstruction codes or magnetic probes.

On DIII-D, DPRF was tested in ITER Baseline Scenario plasmas, where closed-loop performances were verified by successfully integrating the disruptivity in the Off Normal Fault Response algorithm [Eidietis2018] for emergency response. In different discharges, the Massive Gas Injection (MGI) was triggered in response to dangerous tearing mode activity, the Electron Cyclotron Heating (ECH) system was aimed at q=3/2 surface when such precursor emerged, and an early shutdown via fast ramp down was triggered also due to the presence of a tearing mode (see Fig. 1a). Additionally, the peaking factors were verified to represent a good metric for impurity accumulation events, when probing via Argon injection – see Fig. 1b. The successful integration of DPRF in DIII-D PCS is part of a broader approach to qualify advanced disruption prevention strategies to address ITER’s critical needs. More details about the “Disruption Free Protocol” can be found in the contribution by J. Barr et al IAEA-FEC 2020.

On EAST, DPRF was tailored to predict high-density scenarios and closed-loop performances were tested during recent mitigation experiments, where several disruptions were mitigated via MGI. In Fig. 2 we show one example of a real-time experiment in January 2020, where predictions and interpretations were provided in around 200 microseconds computing time. EAST discharge 94520 shows symptoms of a density-limit disruption (high contribution from the Greenwald density fraction) but eventually disrupts due to a radiative collapse caused by impurities in the plasma (dominance of loop voltage contribution at the end). The developed algorithm still presents some residual flaws as it shows to be prone to false alarms when H-L back-transitions occur during the discharge. More work will be required to also implement analogous peaking factors synthesized from EAST diagnostic systems, crucial to define a device-independent framework for properly diagnosing disruption precursors. 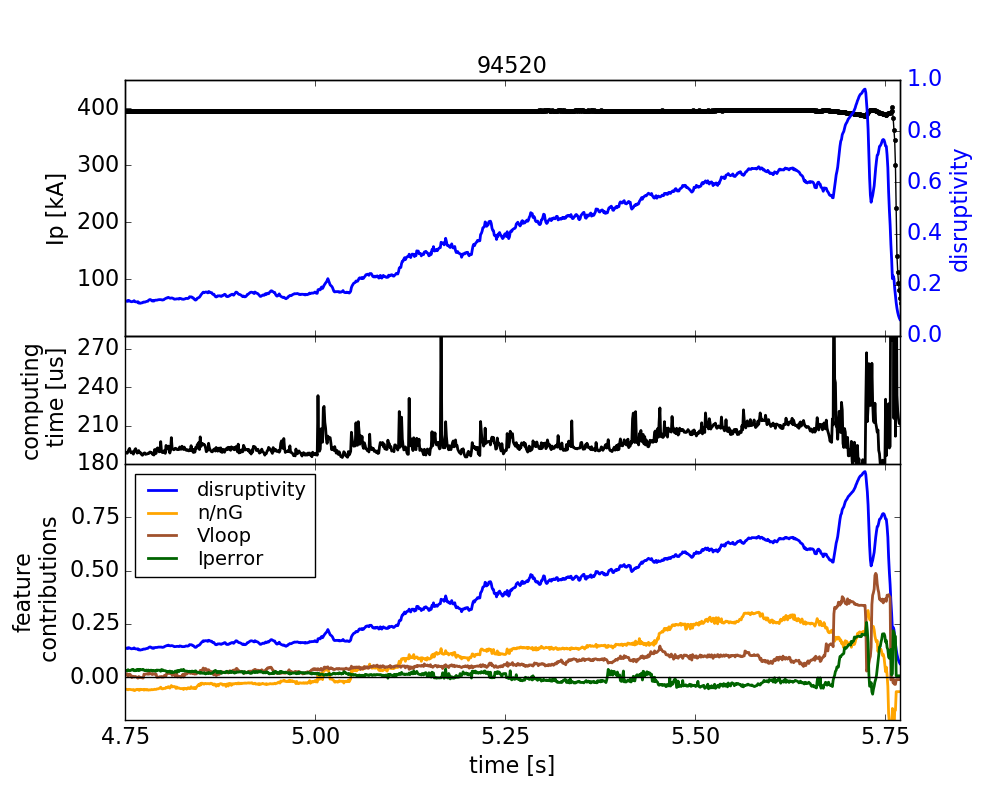 Current results represent a step forward in data-driven control for scenario optimization and disruption avoidance for ITER and next generation devices. This work establishes the importance of developing tools capable of identifying and informing in real-time the PCS on the dangerous plasma parameters deviations to the disruptive space to enable the proper actuators’ response. Effort is ongoing to map the feature contributions to the actions of the available actuators, but also to define a robust framework to transfer the knowledge gathered using data from existing experiments to unseen devices.