Recent tungsten (W) divertor experiments in the DIII-D tokamak have made significant progress elucidating key mechanisms responsible for high-Z erosion, re-deposition, leakage, and scrape-off-layer (SOL) transport. These results have important implications for ITER and other next-step fusion devices, including insight into W sourcing during mitigated edge localized modes (ELMs), diagnosing and understanding the net erosion of W in steady-state and transient phases, and developing a predictive capability for both local and global high-Z material migration.

During the application of RMPs for ELM control, however, the peak W gross erosion rate actually increases. FSRM calculations indicate this is due to a decrease in the intra-ELM magnetic connection length, $L_\parallel$, relative to the length of the ELM filament, $L_{ELM}$. The ratio of these two quantities is the only free parameter in the FSRM. RMPs may cause the formation of a direct path between the strike-points and a reservoir of hot impurities deep into the plasma core$^1$, increasing the effective physical sputtering yield of tungsten from ELM impacts.

Leveraging newly calculated atomic rate coefficients and a recently developed ultraviolet spectroscopy system$^2$, we also present the first detailed, in-situ analysis of the net erosion of high-Z material in a fusion device. Tungsten gross and net erosion are measured spectroscopically via the ionizations per photon, or S/XB, method$^1$. W net erosion is nearly equal to gross erosion when the neutral ionization length, $\lambda_{iz}$, is large relative to the W$^{^+}$gyro-radius, $\rho_W$, and magnetic pre-sheath width, $\lambda_{sh}$, due to a lack of W prompt re-deposition. As $\lambda_{iz}$ decreases, the rate of W net erosion also decreases, with a strong inflection point near $\lambda_{iz}/\rho_W \approx \lambda_{iz}/\lambda_{sh}$ ~ 2-3. At the lowest ionization lengths achieved, $\lambda_{iz}/\rho_W \approx \lambda_{iz} /\lambda_{sh}$ ~ 0.4, net erosion drops to as little as ~20% of the gross erosion. Measurements are lower than calculations from analytic prompt re-deposition models$^{3,4}$ when $\lambda_{iz}$ is large. This is attributed to non-local W re-deposition, which is not included in the models. When $\lambda_{iz}$ is small relative to $\rho_W$ and $\lambda_{sh}$, more net erosion occurs than calculated by the models. ERO simulations indicate that W re-deposition from charge states W$^{^{2+}}$and higher (not included in the simple analytic models) becomes important in this regime. 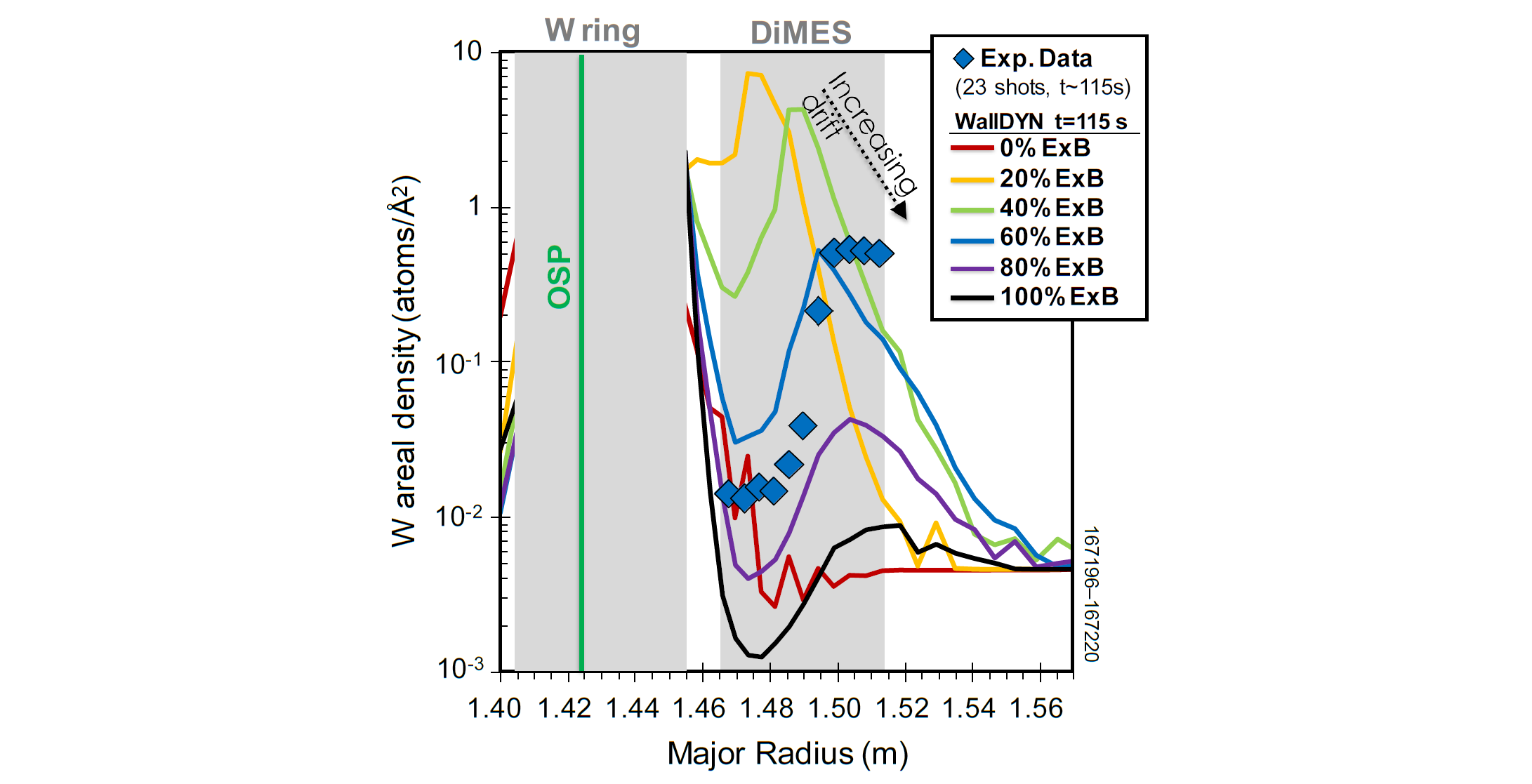 Mixed-material, high-Z impurity migration models have also been validated by DIII-D tungsten divertor experiments. Simulations conducted using the coupled DIVIMP-WallDYN codes indicate $E$×$B$ drifts are the dominant driver of material migration in the divertor region in L-mode discharges with the ion $B$×$\nabla B$ drift away from the strike-points. Incorporating $E$×$B$ drifts, calculated via integrating Ohm's law along parallel field lines, is essential to match the W migration features observed experimentally$^5$. A peak in the W deposition profile appears many ionization lengths radially outboard of the ring of W-coated divertor tiles (Fig. 2). The WallDYN model agrees with experimental data within a factor of two over the entire radial extent of the W re-deposition pattern when $E$×$B$ drifts are adjusted to 60% of their calculated value (Fig. 2). This suggests (a) high-Z material migration involves multiple erosion/re-deposition events before reaching equilibrium, and (b) effects beyond Ohm's law, such as SOL currents, may play an important role setting the electric field in the divertor region.

Finally, the net force on high-Z impurities in the far scrape-off-layer is observed to change dramatically with ion $B$×$\nabla B$ drift direction in DIII-D, suggesting strong high-Z entrainment in SOL flows. Tungsten flow patterns in the low-field side, far-SOL (deduced via a midplane collector probe system$^7$) are observed to be primarily towards the outer target with the ion $B$×$\nabla B$ drift away from the outer strike point (OSP), and vice versa for $B$×$\nabla B$ drifts towards the OSP. An ad-hoc SOL flow model added to DIVIMP simulations (based on experimental flow profiles) produced reasonable agreement with measured high-Z flow patterns. This suggests that background plasma flow patterns may be instrumental in causing the long-hypothesized near-SOL, high-Z impurity accumulation, which sources impurities into the far-SOL via cross-field diffusion.

Because the atomic physics and surface physics of carbon and beryllium are quite similar, experimentally validated PMI models on DIII-D significantly advance the field towards a predictive capability for the high-Z divertor erosion, re-deposition, and leakage in the mixed-material environment of ITER. Such models are essential to develop/optimize mitigation strategies for minimizing high-Z core contamination and maximizing fusion gain.