TAE excitation experiments were performed using intensive super Alfvénic hydrogen ($v_{bH}\sim1.5v_A$ where $v_A$ represents the Alfvén velocity) and deuterium ($v_{bD}\sim v_A$) beams in the relatively low field ($B_t = 0.6$ T) and high energetic particle beta ($\sim$1%) conditions (Fig. 1). The excited TAE composed of poloidal mode number/toroidal mode number of 1+2/1 has a relatively wide radial structure whose peak is at a normalized minor radius of ~0.6 [B]. A neutron flux detector, vertical neutron cameras, a tangential E||B neutral particle analyzer (NPA), and a fast ion loss detector (FILD) were employed at the same time to measure confined and escaping energetic particles. The TAE burst induces a slight decrease in $S_n$, a decrease in $W_p$ owing to the loss of heating source, an increase in the co-going transit fast hydrogen/deuterium flux, and an increase in the escaping fast ion flux corresponding to co-going (40$^\circ$ pitch angle) and transition orbits (60$^\circ$ pitch angle) near the injection energy. The short decay time of transition particles compared with co-going particles may result in shorter confinement time of transition particles. Although we observed a considerable increase in the fast neutral flux and escaping fast ion flux, $S_n$ and $W_p$ showed that the degradation of global energetic particle confinement due to TAE was less than 5%. In this experiment, the TAE amplitude decreased with an increase in the plasma density, and the considerable transport or loss of energetic particles were not observed at the line-averaged density of 2 $\times$ 10$^{19}$ m$^{−3}$.

By the intensive perpendicular neutral beam injection into the relatively low-density plasma ($\sim1\times10^{19}$ m$^{-3}$), the steep pressure gradient of helically-trapped energetic particles excites EIC classified as EPM. EIC located at the plasma edge ($r/a\sim$0.85) induced a decrease in $S_n$ by $\sim$50%, a decrease in $W_p$, and a change in the neutron emission profile. The orbit following simulation using the DELTA5D code [C] that included EIC fluctuation was performed to understand the energetic particle transport. A change in the neutron emission profile owing to EIC was successfully reproduced (Fig. 2). We determined that a change in the line-integrated neutron emission profile due to EIC indicated the considerable loss of helically-trapped beam ions, which excited EIC. The steep pressure gradient of beam ion immediately excites EIC by overcoming strong damping, whereas the pressure gradient of beam ion gradually excites TAE under weak damping conditions [D]. Therefore, the energetic ion transport owing to EIC is probably larger compared to the transport due to TAE. With an increase in the plasma density ($\sim1.5\times10^{19}$ m$^{-3}$), EIC became weaker, and no significant energetic particle transport was observed.

The effect of TAE and EIC on global energetic particle confinement in the high-density region in LHD is weak because the energetic particle pressure became lower due to the shorter slowing down time. This result showed the possibility of TAE and EIC control by a slight increase in the plasma density. This approach allows to us achieve the high-density operation of a helical-type fusion reactor. 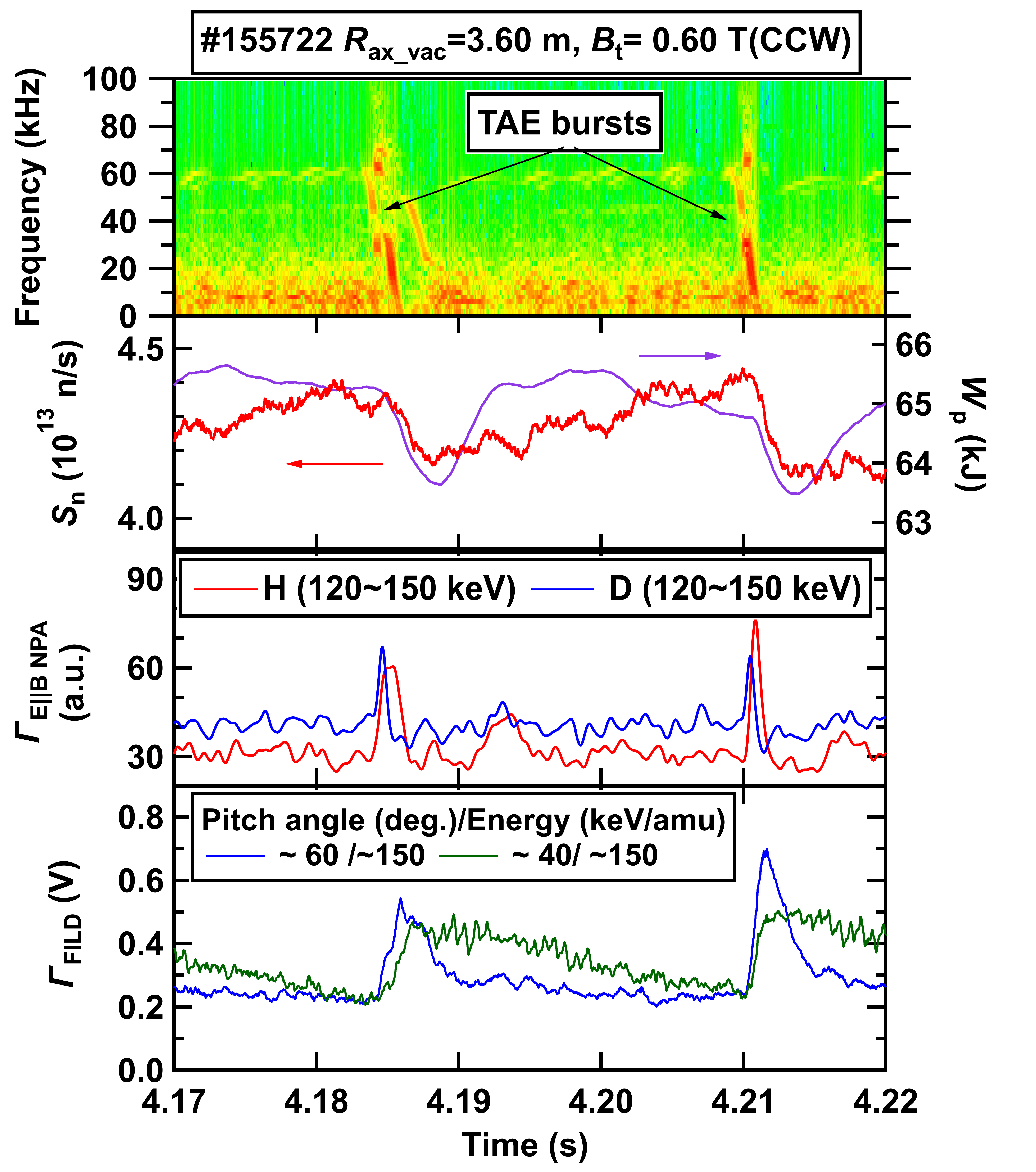 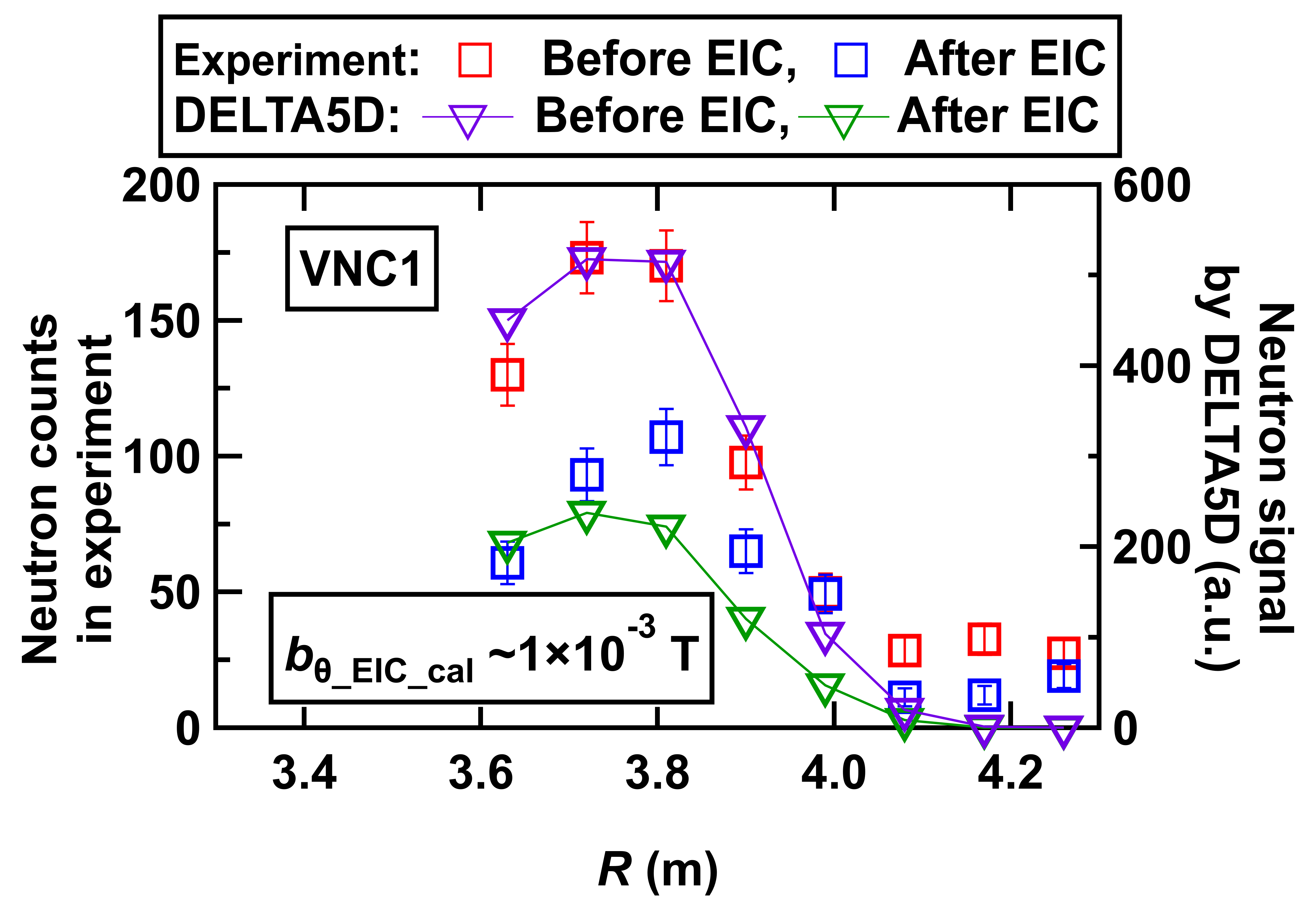