Simultaneous high ion temperature ($T_i$) and high electron temperature ($T_e$) regime has been significantly extended due to the optimized heating scenario in the LHD deuterium (D) campaign. Such high-temperature plasmas were realized by the simultaneous formation of an electron ITB (e-ITB) and an ion ITB (i-ITB) by the combination of high power NBI and ECRH. In the high $T_i$ operation the EIC (Energetic ion driven interchange) modes, which causes the $T_i$ degradation, was clearly suppressed due to the ECRH superposition. Furthermore, the e-ITB was successfully formed without degradation of the ion thermal confinement for the high $T_i$ plasmas. This is due to the $T_{e0}$/$T_{i0}$ maintaining the moderate value of 0.66. Consequently, $T_{e0}$ could be increased up to 6.6 keV with the $T_{i0}$ ~10 keV (previous achievement at FEC2018 was $T_{i0}$ = 10 keV and $T_{e0}$ = 3.6 keV [1]).

In future reactors, the fusion reaction is expected to be sustained under the electron heating dominant condition, where both $T_i$ and $T_e$ are high. Thus not only the investigation of the confinement improvement but also the characterization of the thermal transport for the plasmas, of which $T_i$ and $T_e$ are simultaneously high, are necessary. In the present status, such a plasma condition is realized by the combination heating of a NBI and an ECRH. The effect of a $T_e$/$T_i$ and/or an ECRH on the ion thermal confinement has been studied in several devices. In recent years, an integration of high $T_i$ and high $T_e$ with the simultaneous formation of an i-ITB and an e-ITB has been achieved in the LHD [2]. The paper shows the successful extension of simultaneous high $T_i$ and high $T_e$ regime in the LHD deuterium operation due to the suppression of the EIC modes and control of the $T_e$/$T_i$ value.
The EIC is triggered by helically trapped ions at lower order magnetic resonant surface of $m/n$ = 1/1. The EIC causes loss of high energy ions both in the plasma core and the edge, leading to the decrease in $T_i$ [3]. Thus the mitigation of the EIC is a key for realizing higher $T_i$. Figure 1 shows the comparison of the time evolution of (a) the heating power, (b) the line-averaged-electron density $n_{e-fir}$, (c) the poloidal magnetic fluctuation amplitude $b_\theta$, (d) the neutron emission rate $S_n$, (e) the $T_{e0}$, and (f) the $T_{i0}$ without and with 2.5-MW ECRH superposition. 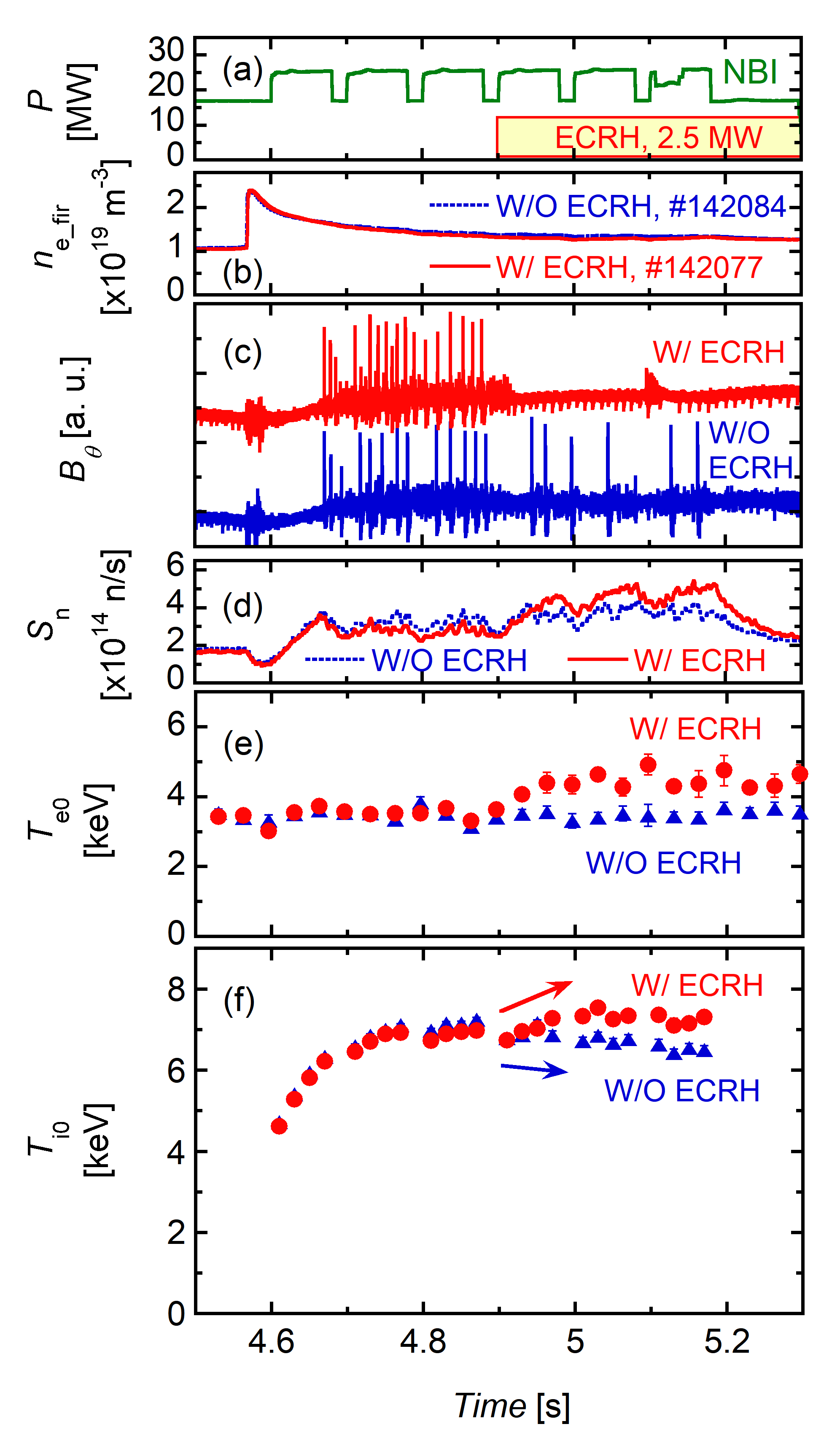 The NBI power was similar (~25 MW) and the operated magnetic configuration was same as $R_{ax}$ = 3.58 m and $B_t$ = 2.87 T. The C pellet was injected at 4.57 s to control the impurity and to increase the S/N of CXS measurement. The bursty increase of $b_\theta$ and the synchronized drop in the $S_n$ correspond to the EIC occurrence and the loss of the high energy ions, respectively. Due to the ECRH superposition the EIC event was clearly suppressed. Consequently, the $S_n$, which is reflected the amount of the confined high energy ions, increased and this contributed to realizing the higher $T_{i0}$. Note that the $b_\theta$ increase at $t$ = 5.1 s was due to the NBI breakdown.
Although the ECRH is effective to mitigate the EIC, the increase in $T_e$/$T_i$ causes the destabilization of the ITG mode [4], leading to the degradation of the ion thermal confinement. Figure 2 shows the dependence of the normalized scale length of $T_i$ on the $T_e$/$T_i$ at the effective minor radius of $r_{eff}$ = 0.1 m. 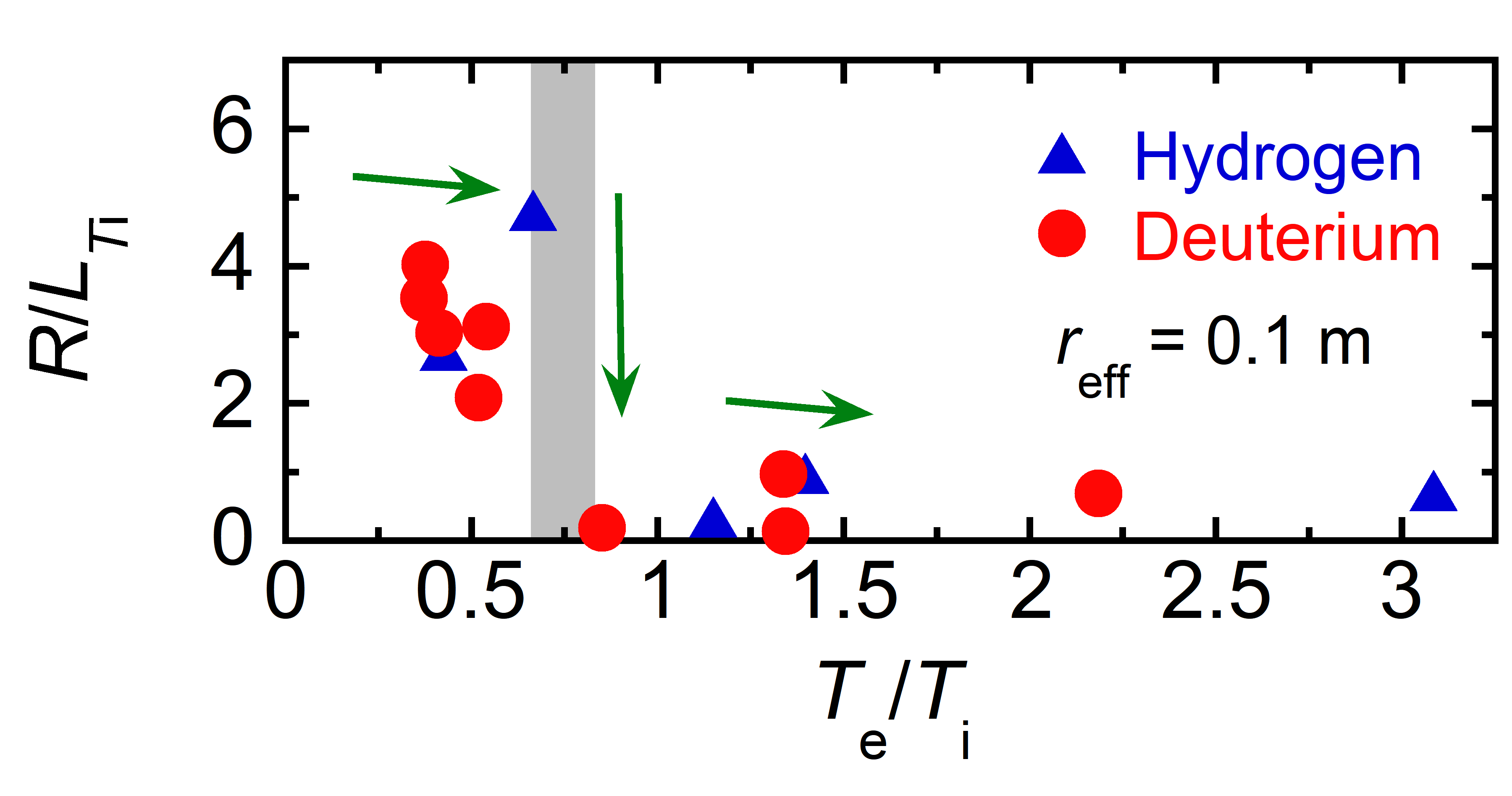 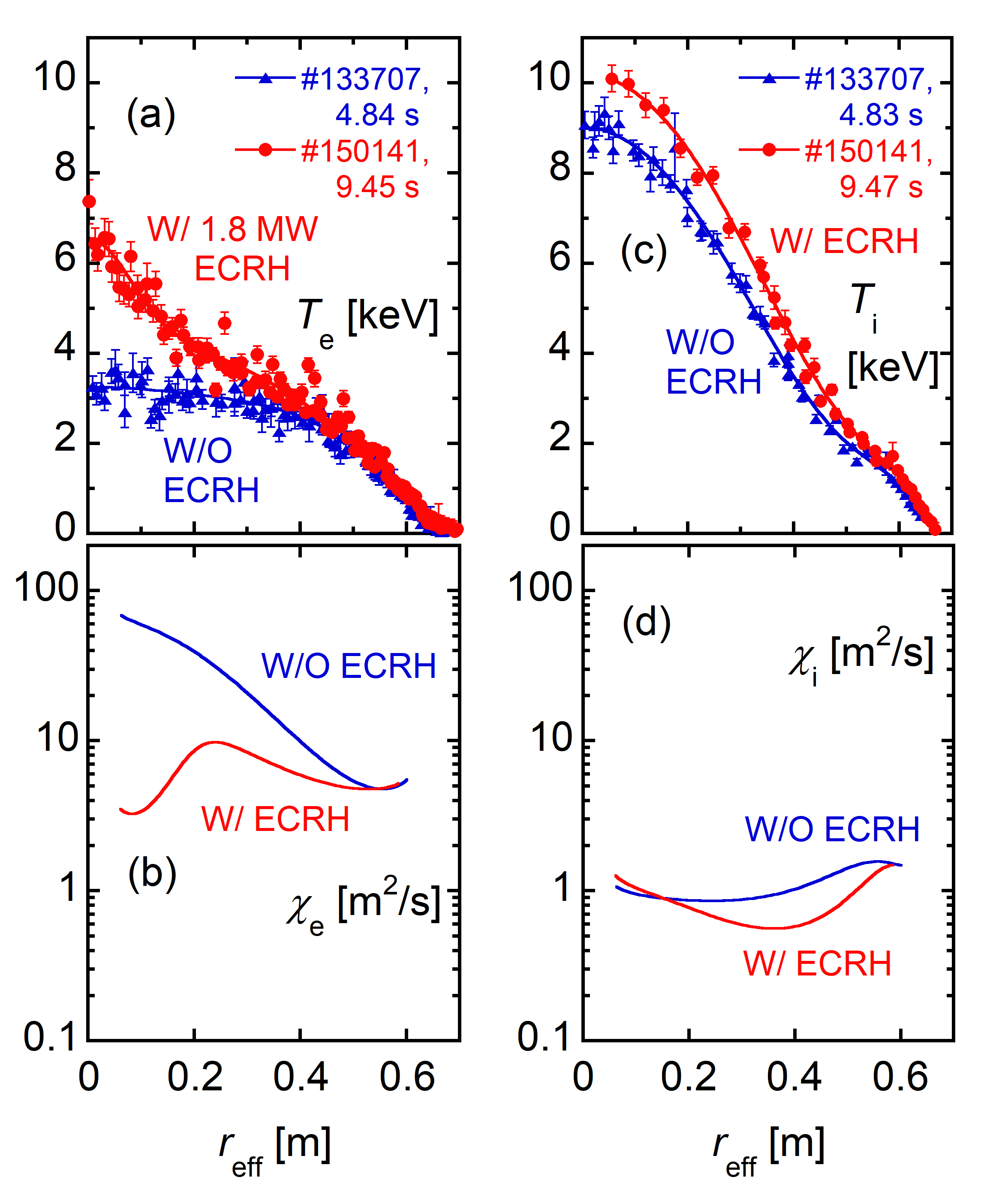 The NBI power was similar (~30 MW) and the operated magnetic configuration was same as $R_{ax}$ = 3.6 m and $B_t$ = 2.85 T. The plasma W/O ECRH was obtained before FEC2018. The EIC events and the accompanying loss of the high energy ions were observed during the discharge W/O ECRH. Applying the on-axis ECRH superposition, $T_e$ gradient increased and the $\chi$$_e$ decreased especially in $r_{eff}$ < 0.2 m due to the e-ITB formation. For the ion, the reduction in the $\chi$$_i$ was observed around the plasma half radius associated with the EIC suppression and the peaked profile was maintained in the plasma central region with the $T_{i0}$ of 10 keV.
Figure 4 is the summary of the extension of the high temperature operational area in the LHD. 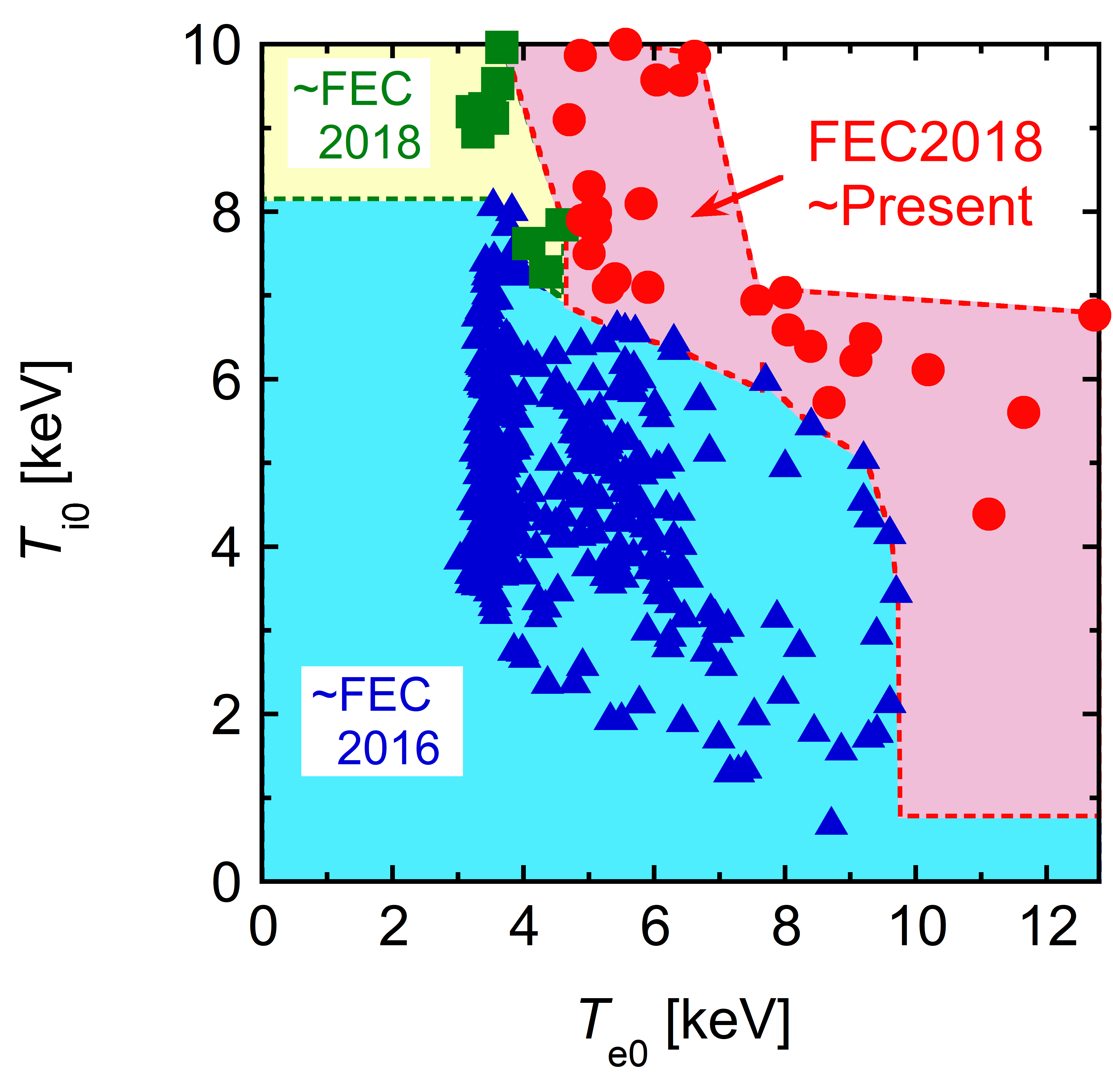 The simultaneous high $T_i$ and high $T_e$ regime was significantly extended from previous IAEA FEC. In the LHD deuterium experiment, we have attained the $T_i$ of 10 keV due to the better confinement accompanied with the stronger i-ITB compared with hydrogen plasmas [1, 5]. Present results of the extension of the high temperature regime reinforce the feasibility of the helical reactor and enable us to investigate the plasma confinement property close to ignition temperature condition.