Improvement of deuterium injection power in the negative-ion-based NBIs for LHD are reported. Co-extracted electron current at acceleration of D$^-$ ions limits the injection power. The electron current is reduced by decreasing the extraction gap, and D$^-$ current increased from 46 to 55 A. More electron suppression was achieved by installing a structure named “Electron Fence” (EF), with which D$^-$ beam power was successfully improved from 2.0 MW to 3.0 MW. Although the negative ion sources applied for JT-60SA and ITER suppress the co-extracted electron current by utilizing Plasma Grid (PG) filter, more effective electron suppression is possible to achieve by combining the PG filter with the Electron Fence.

Reduction of electrons co-extracted together with negative ions is the most important issue in negative ion sources for NBI. Heat load carried with the electrons lowers the voltage holding capability of accelerators and limits the H$^-$/D$^-$ beam power. In LHD NBI, injection power with three neutral beamlines decreased from 16 MW to 6.3 MW after changing the beam species from H$^-$ to D$^-$ ions, respectively. In addition, ratio of electrons to negative ions increased about twice in the D$^-$ acceleration. Diagnostic research was carried out to understand the mechanism of the electron increase depending upon the difference in hydrogen (H) and deuterium (D) plasmas {1}. In this research, we found that electron density in D plasma increased about three times larger than that in H plasma in the beam extraction region. This indicates that the electron current can be effectively suppressed by reducing the electron density in the extraction region. 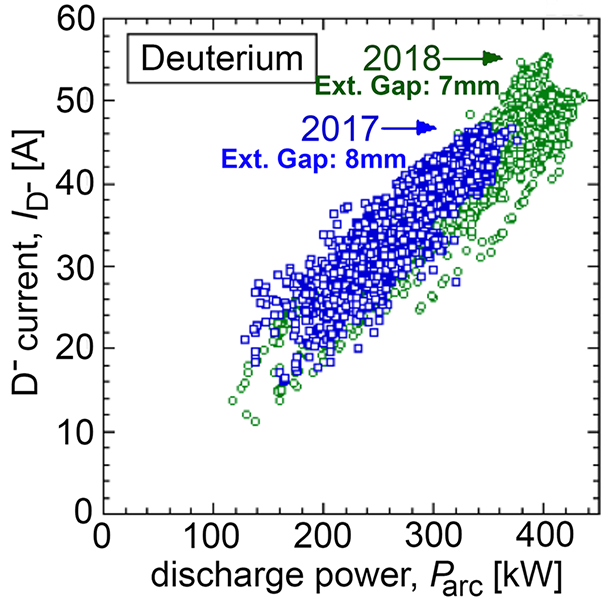 For the purpose to reduce the electron flux, three methods were proposed; they are (1) suppression of the plasma flux by expanding the distance of filter magnets and the PG, (2) enhancement magnetic strength by decreasing the PG-EG gap {2} and (3) installation of a NIFS original device named “Electron Fence (EF)” to reduce electron density at extraction region. The first one has almost no effect to the suppression of electron current. The second method suppressed the electron current and injection power of D beam was improved. Figure 1 shows the D$^-$ current with respect to arc discharge power obtained with 8 mm (2017) and 7 mm (2018) extraction gaps. In the extraction region, magnetic field to deflect electron beams in the extraction gap penetrates partially in ion-source plasma and plays an important role to filter the electron density near plasma meniscus. The electron density could be suppressed with shorter extraction gap, while the gap has a limit of voltage holding. To remove the limit, a prototype EF was introduced to one of the LHD NBI system. 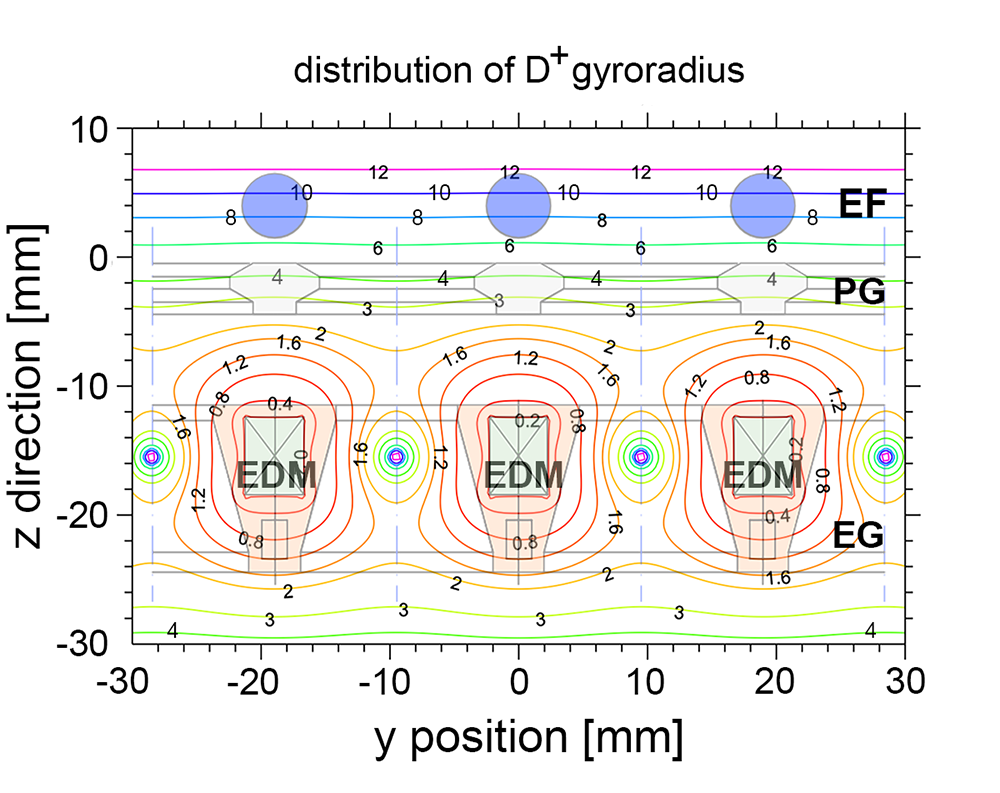 The EF consists of molybdenum multi-rods aligned parallel to the cusp lines formed with Electron Deflection Magnets (EDM); the cusp lines are installed between neighboring horizontal rows of PG apertures. Cross-sectional view of the EF, PG, EG and EDM are shown in Fig. 2 with the distribution map of deuteron gyro radius. Diffusion flux of deuterons and electrons concentrates to the cusp lines of EDM and reaches the PG surface. The gyro radius of deuteron in negative ion source is much larger than the radius of EF rods of 2.5 mm, while electron gyro radius is less than 1 mm. Consequently, the EF blocks only electrons. Although, in usual electron plasma, positive ions cannot diffuse further toward the PG due to ambipolarity, charge neutrality is conserved with mutual diffusion of positive ions and negative ions produced on the PG surface and negative ion plasmas are formed in caesium seeded negative ion sources. 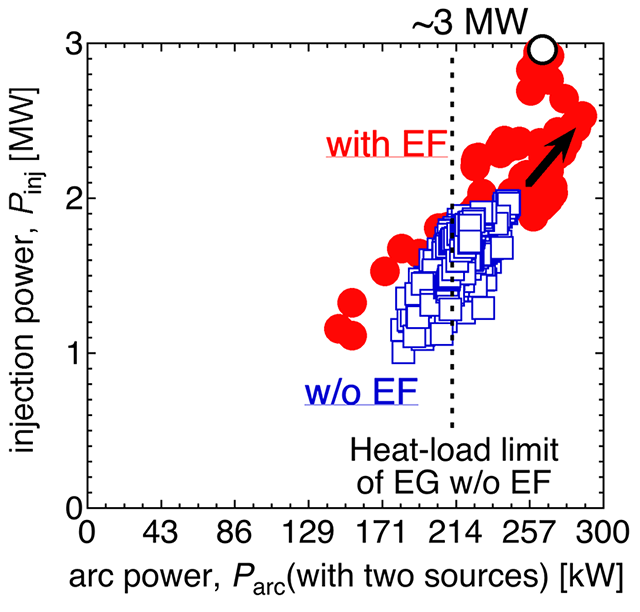 After installing the EF to LHD NBI source, current ratio of co-extractions to negative ions decreased from 32 % to 14 %. Injection power of D beam with respect to input arc power is indicated in Fig. 3. The red solid circles and blue open squares indicate the injection powers with and without EF. Without EF, the arc power is limited less than 230 kW due to higher co-extracted electron current, which induces frequent voltage breakdown between extraction gap. The power limit was removed by electron suppression of EF and injection power of 3 MW (black open circle) has been achieved.

The LHD negative ion sources have no PG filter, which is equipped with JT-60SA and ITER sources, and the EF was installed to decrease co-extracted electrons. The current ratio of electrons to negative ions, however, are higher in RF sources than that in the filament-arc source like LHD sources, and both types of the sources have similar tendency to increase the electron density at beam extraction region {3}. Therefore, improvement of the performance of RF sources existing at present and those to be adopted to ITER and DEMO NBI can be expected by combining the EF together with PG current filter, especially in the long pulse and high-power operations more than 1000 sec.