This paper presents solutions for critical problems in Japan’s DEMO (JA DEMO), which include common DEMO design issues beyond ITER-relevant technologies. The highlights of this design study are (i) system design for electric power generation, (ii) remote maintenance concept to attain a high plant availability, and (iii) novel concept for water-cooled pebble bed blanket and tritium recovery. The proposed concept as JA DEMO will be the foundation for Japan’s DEMO that can be envisioned in the next stage of ITER.

1. Introduction
The pre-conceptual design of JA DEMO has been proposed by adding the technology outlook of ITER and JT-60SA. JA DEMO has a relatively large major radius Rp = 8.5 m for long-pulse operation and a relatively low fusion power Pfus = 1.5 GW for divertor heat removal [A]. The cooling water for DEMO is operated at the PWR (Pressurized Water Reactor) water conditions of 15.5 MPa and 290 ºC-325 ºC. In this paper, we state the following three issues of JA DEMO design; (i) in order to evaluate the electric power output, it is necessary to clarify the design of the cooling system and the heat balance of the primary heat transfer system (PHTS), and the power consumptions of the pumping power in the PHTS, the freezing power for the superconducting coil, the injected heating power for plasma operation, etc., (ii) in order to develop a remote maintenance scheme (RMS) for the replacement of large components in the high dose area, the movement line of remote handling (RH) device must be arranged to maintain the soundness of the device based on the shutdown dose map of JA DEMO, and (iii) in order to develop a blanket concept with the capabilities of high tritium (T) productivity and pressure tightness, it is necessary to obtain a high packing factor up to 80 % with binary packing and to recover the T generated in the packing area without retention. Approaches to resolve these design issues and remained challenges are presented in the following sections.

2. Evaluation of electric power output
The electric generation systems for JA DEMO is developed without intermediate heat exchanger. This is because T permeation through the steam generator to the secondary cooling system in the PHTS is found to be less than the restricted amount of T disposal for pressurized water reactors in Japan [B]. Here, the generator output was evaluated to be 640 MW with the thermal efficiency 34.4 %. The power consumption was analyzed to evaluate the electric power output. To evaluate the pumping power in the PHTS, the intricate cooling system was designed in consideration of suitable configurations of the systems for the PHTS such as steam generator, pressurizer, etc. as shown in Fig. 1. The pumping power of the cooling system in the PHTS was evaluated to be 71 MW. Since the design concept of the superconducting coil is basically same with to that of ITER, it is determined by scaling the freezing power in ITER as 91 MW. In the NBI system of the heating and current drive (H&CD), the neutralization efficiencies of the photon and gas neutralizers are assumed to be 90 % (theoretical value) and 56 % (ITER technology), respectively. Here, the neutralizer method makes a difference in the power consumption of 118 MW. Hence, the total power consumption was found to be 386 MW with the photon neutralizer, and the electric output was evaluated to be 254 MWe as summarized in a table of Fig. 1.

3. Remote maintenance scheme in the high dose environment
The RMS is as follows for the JA DEMO: after cutting of a cooling pipes in the maintenance ports, the blanket segments and divertor cassettes integrated with shielding plugs (SP) are replaced through vertical upper ports and bottom ports, respectively, as shown in Fig. 2. The major tasks in RMS for JA DEMO have been how to replace large-scale components and how to implement the maintenance work in the high radiation environment. In the previous studies, we had focused mainly on the construction method for stably replacing large-scale components which weighs 100 tons and stands 10 meters high as shown in Fig. 2. We found that if plant availability was expected to reach about 70% which is the requirement of JA DEMO, the blanket segments must be replaced in parallel from 4 out of 16 ports. We also found out the characterizations of RMS in the high radiation environment [C]. By arranging SPs, the dose rate of the points for cutting and re-welding cooling pipes in the maintenance ports can be reduced to about ~ 0.1 Gy/h as shown in Fig. 2(a). However, when the outboard blanket segments and the divertor cassettes with the SP were removed together, the dose rate in these maintenance ports increases to 100 Gy/h at the maximum as shown in Fig. 2(b). Here, the dose rate in the vacuum vessel of ITER during maintenance is evaluated to be 250Gy/h according to the requirements for remote handling of the shielding blanket. Therefore, maintenance techniques developed for ITER such as pipe cutting or re-welding are applicable to the JA DEMO in terms of the spatial dose rate. 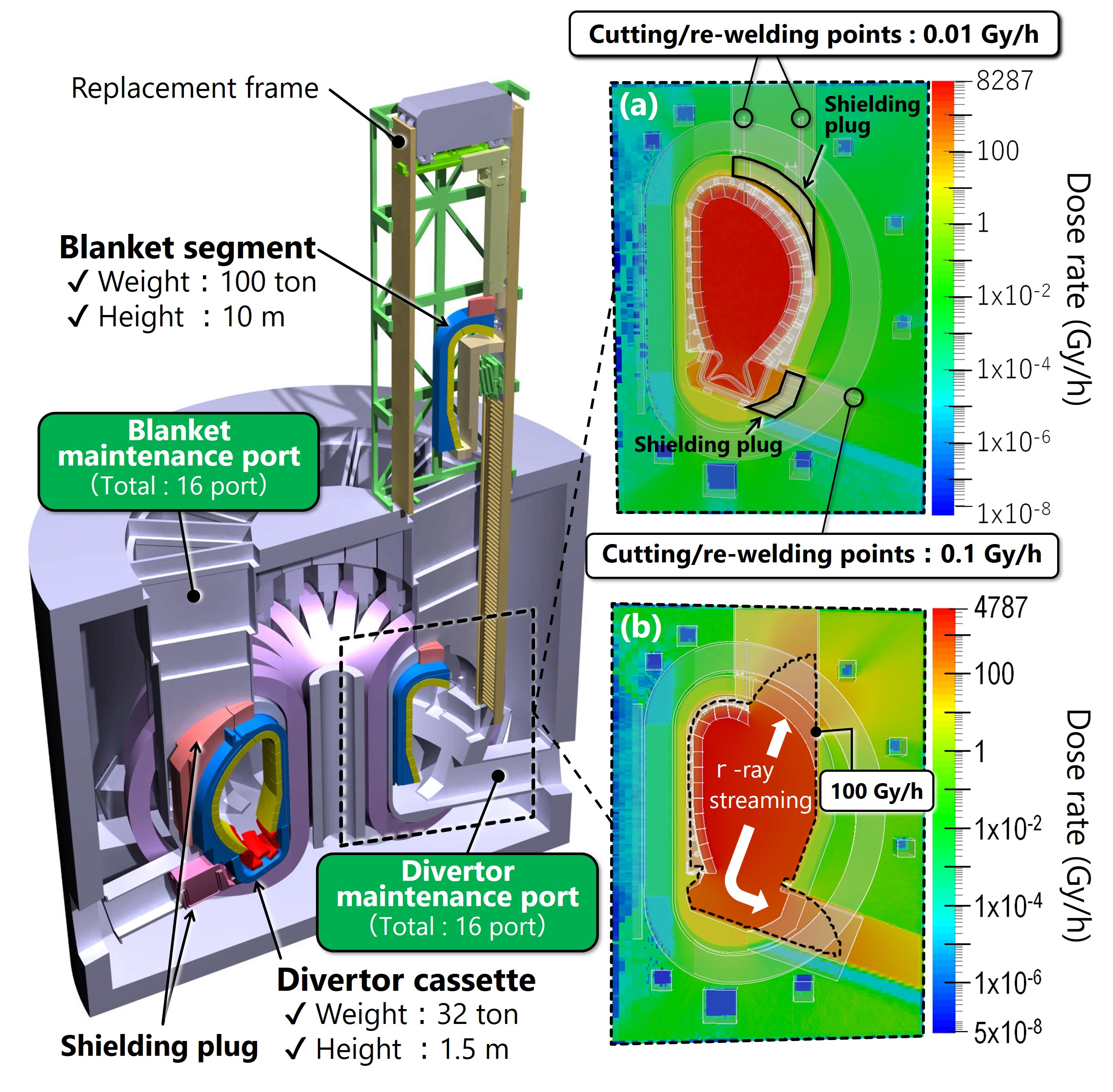 4. Blanket concept and tritium recovery
The conceptual design of the breeding blanket of honeycomb structure, which has pressure tightness against in-box loss-of-coolant accidents in a water-cooled solid breeder, has been developed as shown in Fig. 3(a). As honeycomb structure is higher in pressure tightness than square prism structure, the area for filling the mixed pebbles breeder of Li2TiO3 pebbles and Be12Ti ones can be enlarged. From the results of the 3D neutronics analysis, the target of the overall TBR (>1.05) would be achievable. To achieve the TBR target, it is necessary to fill the packing factor to 80% by binary packing. However, there is a concern that the amount of T retained in the breeding area may increase due to pressure drop. To avoid T retention in the breeding area, the flow of He-purge gas is arranged by using three inflow points of He-purge gas near the first wall. Then the retention of T was resolved as shown in Fig. 3(b). 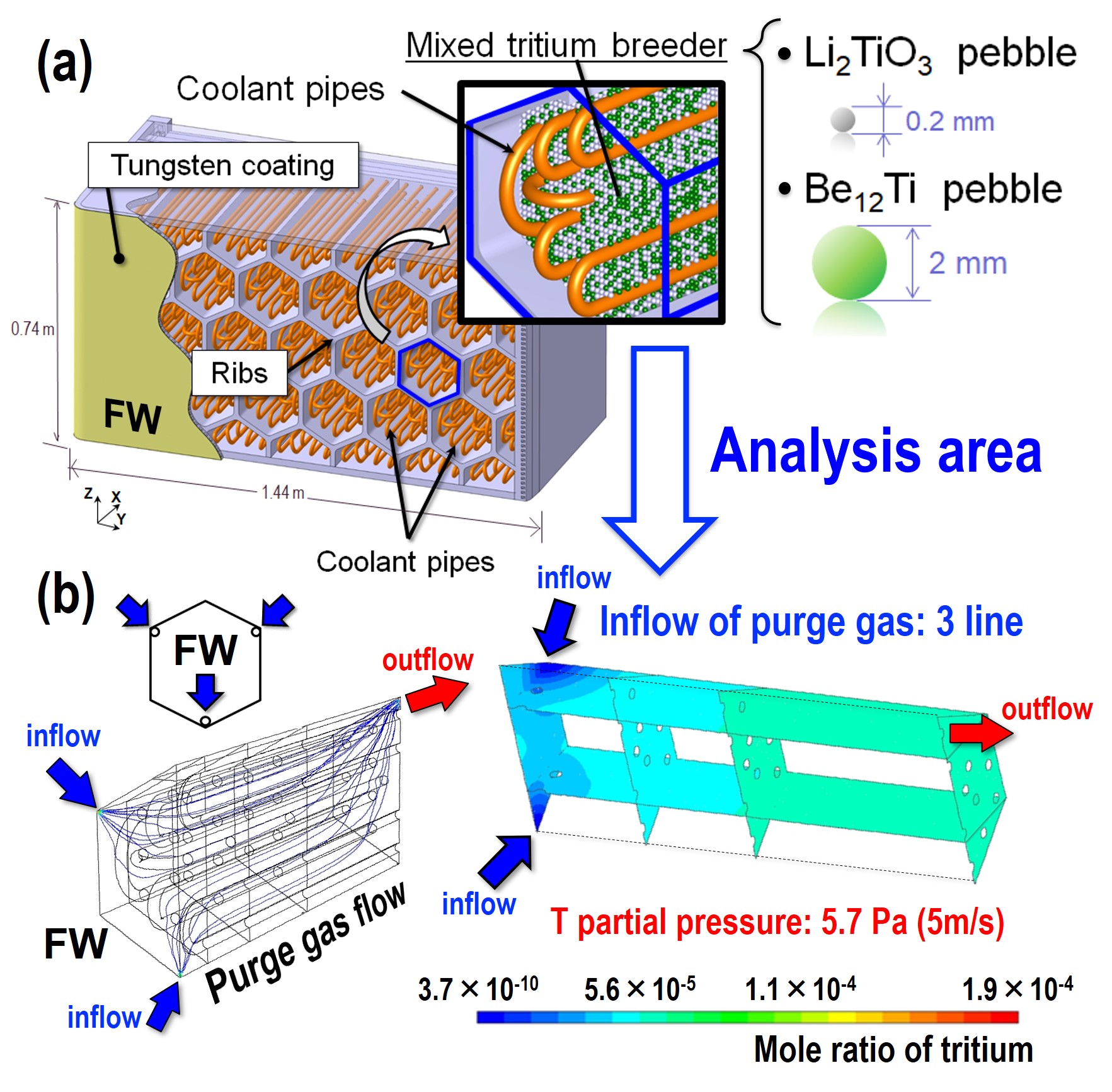