Future DT operation in ITER and DEMO will face a significant number of challenges. From the physics point of view, the change from DD to DT plasmas is poorly understood. There are indications that the core confinement, the ELM behavior, the pedestal confinement and the Scrape of Layer behavior can significantly change from DD to DT. From the operational point of view, scenarios with high enough alpha power production are essential to demonstrate that efficient electrical power generation is possible but this also requires techniques for power exhaust, ELM and impurity sources and accumulation control in the presence of enough additional input heating power and a metallic wall environment.
In order to address the relatively scarce knowledge of DT plasmas and in support of safe future DT operations, JET has developed a scientific program in DD, TT and DT with the aim of supporting and minimizing the risks of the transition from DD to DT plasma operation in ITER 1. Such program helps to understand and document the physics characteristics of DT plasmas but also to provide scenario solutions integrating several key aspects such as core transport, impurity accumulation avoidance, power exhaust, enough fusion power generation to reveal alpha particle effects and potential difficulties for operation.
To this end, JET has gone through an upgrade of diagnostics and heating systems, in particular, Neutral Beam Injection (NBI) input power, which has delivered the record of 32MW. With such power, high performance scenarios have been developed following two main routes, i.e., the baseline scenario with $q_{95}$~3, β$_N$~2, H$_{98}$(y,2) ~1 at high current and magnetic field and the hybrid scenario with $q_{95}$~4, β$_N$~2.4, H$_{98}$(y,2) ~1.3 at reduced current and low central magnetic shear.
Compared to previous campaigns [2], a new baseline JET DD neutron rate record in the ITER Like Wall (ILW), R$_{NT}$=4.1x10$^{16}s^{-1}$, has been attained as shown in figure 1. This high performance was possible at current Ip=3.5MA and magnetic field B$_T$=3.35T through a complex non-linear interaction between edge and core plasma regions. From the pedestal side, high frequency ELM’s help to flush impurities. This is obtained by combining 50%/50% particle source with pacing pellets and neutral gas puff as it allows simultaneously good confinement and impurity flushing. The pedestal density is relatively low for such a high current, ~4x10$^{19}m^{-3}$, but the strong peaking, which is significantly high in these conditions of low core NBI fueling, leads to a core density ~1x10$^{20}m^{-3}$. Rotation and its shear are high both for the core and the pedestal with a Mach number reaching 0.6 at mid-radius. The ExB shearing of such plasmas, which usually are in the ITG regime, have been shown to be important for the decoupling of ions and electrons [3], with Ti/Te~1.7 in the best performing discharge at H$_{98}$(y,2)=1.0, and for increasing the density peaking through an increase of the inward pinch [4]. The radiation power is mostly localized in the low field side pedestal for the whole discharge and never penetrates in the inner core, which allows long and stable flat-top pulses up to 5s.
This new baseline scenario at high Ip and with relatively low density and high temperature at the pedestal offers an attractive alternative to hybrid scenarios as no specific q profile tailoring or core improved confinement is required in order to obtain high neutron rate. Although the Greenwald fraction is moderate, G$_{fr}$=0.65, a key point is the density peaking, which provides core densities compatible with high fusion power. Furthermore, the ion pedestal temperature, 1.3keV, provides a route for avoiding W accumulation through neoclassical screening. The relevance of this scenario for ITER is strong for the long pulse operation program [5] as it can soften some of the constraints for the hybrid scenario in terms of off-axis current.
The hybrid route has also stablished a new neutron record generation compared to previous campaigns, R$_{NT}$=4.7x10$^{16}s^{-1}$. This has been obtained in conditions of reduced β$_N$=2.4 by working at higher magnetic field, i.e. 3.45T and $q_{95}$=4.5 rather than 2.8T used in previous campaigns with $q_{95}$=4.0. Actually, temperature and density profiles are essentially identical for both magnetic field showing that, at least in this regime, high confinement appears to be largely independent of the magnetic field. However, it has been also obtained that β$_p$≥1 seems to be necessary to get good confinement. Such hybrid plasmas are type I ELMy H-modes with Ti/Te ~1.5. They are prone to suffer from impurity accumulation when the low gas used in order to obtain high confinement leads short phases of too low ELM frequency. Further techniques, such as pacing pellets, will be used to maintain an adequate level of ELM frequency, and hence impurity flushing, but at reduced gas injection.
A key element that has significantly improved the robustness of both scenarios is the use of real time control techniques which have been applied for ELM, fueling and impurity accumulation control. With such techniques, the disruptivity has been significantly decreased to ~9% for the hybrid and to ~25% for the baseline when previously reached 60%.
An extensive exercise of ‘predict first’ modelling has been carried out with the aim of predicting the DT fusion performance expected in the future JET-DT campaign. As a first step, DT equivalent fusion power from recent plasmas at high power has been compared to past predictions from lower power discharges showing a reasonable agreement when using validated models, such as TGLF or QuaLiKiz, for core transport [6,7].
DT extrapolations to the maximum available power at JET show that 11-16MW of fusion power are possible both for the baseline and hybrid routes. In particular, favorable core isotope effects are found for the hybrid scenario in conditions of low turbulent transport, such as strong rotating and high core thermal and fast ion beta plasmas.
Finally, in baseline plasmas, electron heating by alpha power can be dominant when ICRH is temporary removed. Such characteristic can be used to demonstrate alpha heating in ITER relevant conditions for the first time. These predictions will be compared to TT and DT plasmas when they will be obtained in the upcoming campaigns at JET. 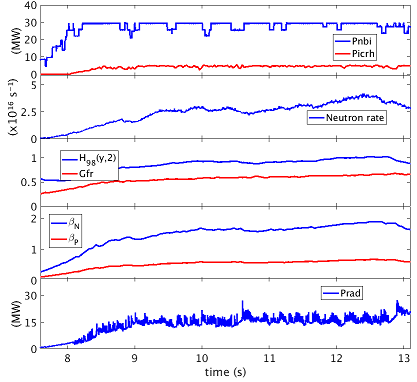