The ADITYA/ADITYA-U tokamaks are equipped with state-of-art spectroscopic diagnostics in the visible and vacuum ultraviolet (VUV) region of the spectra. These spectroscopic systems are used to study several physics problems in ADITYA tokamak as well as in ADITYA-U, which is an upgraded version of ADITYA, having capability of producing shaped plasmas. The physics studies addressed in this paper are studies of impurity behaviour, dynamics of neutrals, measurement of plasma rotation, a novel technique to estimate electron temperature in the edge region by simulating the temporal profile of H-alpha intensity observed at the time of hydrogen gas puff, estimation of particle confinement and ion temperature etc.
The ADITYA/ADITYA-U tokamak plasma is diagnosed mainly by detecting the radiation emanating from the plasma using spectrometers, filter-PMT combination and fast imaging cameras. Several spectroscopic diagnostics were developed for ADITYA, which was having a poloidal ring limiter, and its present upgraded version ADITYA-U tokamak with toroidal belt limiter. The line averaged ne and core Te of the plasmas are in the range of 1 - 6.0 x 1019 m-3 and 300-700 eV, respectively. The toroidal magnetic field was ~ 0.75 to 1.4 T in these studies.
The fast visible imaging camera was attached to tokamak using an imaging fiber bundle on a re-entrant view port to acquire images of plasma evolution at ~ 14 kHz frame rate. This system enabled to observe the thick toroidal filaments (figure 1a) during the disruptive phase of ADITYA tokamak plasma and those were explained in term of interchange modes 1. Further the boundary of the plasma was also detected by the imaging camera and was used to control plasma position. Furthermore, the fast visible imaging was used to study the plasma collapse during micron-sized particle injection through an electromagnetically driven payload for disruption mitigation studies. Photo multiplier tube (PMT) based system, which is normally used to monitor temporal evolution of spectral lines, such as H, from OII and CIII and visible continuum emission, was extensively employed to study the hydrogen recycling, impurities behaviour and Zeff [2]. It was found that the Zeff were reduced 1.5 to 3.0 for the analyzed discharges after the Li coating of plasma facing components of ADITYA tokamak compared to the Zeff values of 2.0 - 4.5 for the discharges before the Li coating [3]. The radial profiles of H measured using 8 channels PMT array based diagnostic were modelled using DEGAS2 neutral transport code. The details studies on the contribution from various atomic and molecular processes show that substantial amount of hydrogen molecules survive inside the plasma up to 4 cm from the limiter of ADITYA tokamak having typical edge Te of 10- 15 eV [4]. A PMT based system is recently developed to monitor the radial profile of visible continuum for the Zeff profile estimation of ADITYA-U tokamak plasma.
An indigenously developed impurity transport code based on semi–implicit numerical scheme was used for modelling of the radial profile of O4+ emissions at 650 nm from ADITYA plasma and the studies has revealed the higher oxygen diffusion coefficient at plasma edge than the neoclassical values as shown in figure 1b [5]. The O4+ emission profile were recorded using a high resolution visible spectroscopy system having 1 m focal length visible spectrometer and charge coupled device (CCD) camera, which capable of multi-track measurement simultaneously from eight lines of sight. The radial profiles of impurity toroidal rotation velocities from ADITYA-U plasmas were also obtained by measuring Doppler shifted passive charge exchange emission at 529 nm from C5+ ion. The lights were collected using a front-end optic placed inside the re-entrant tube from a tangential port of the tokamak. The data were converted using an Abel-like matrix inversion to get radial profile of impurity rotation and ion temperature. The maximum C5+ rotation velocity and ion temperature values were ~ 15 km/s and ~ 120 eV, respectively, for the analyzed discharges and the reversal of toroidal rotation was observed for the discharges having electron densities  3x1019 m-3 [6] as depicted in figure 1c. The spatial profile of temperature of neutral hydrogen and low ionized impurities ions of ADITYA-U plasmas were also determined from the Doppler broadened H and spectral lines from lowly ionized carbon and oxygen impurities after incorporating the influence of Zeeman Effect into the apparent broadening of spectral lines. It is found that the neutral temperature (TH) is having two components, warm and hot and their values vary in the range of 3 - 5 eV (shown in figure 1d) and 18 - 25 eV, respectively [7].
A toroidal grating based VUV survey spectroscopy system working in the 10 - 180 nm range regularly monitored the survey spectrum from low and highly ionized impurities in the plasmas enabling to do the details studies of impurity transport in the central region of the plasma. The measured VUV spectral lines from highly ionized irons, such as Fe14+ and Fe15+, were analyzed to study the ion impurity behaviour in high density ADITYA tokamak plasmas and its concentration was found to be lower than 0.1% [8]. For the first time, ADITYA-U has experimentally demonstrated the use of electromagnetic pellet injection for firing the impurity pellets into the tokamak plasmas for disruption mitigation studies. Lithium titanate (Li2TiO3) and Lithium carbonate (Li2CO3) particles of 50 – 80 micron particles are injected in to the plasma. The spectral lines of Li showed a self-absorption peak on top of the emission spectra during the injection, which has been diagnosed thoroughly to understand the disruption mechanisms. 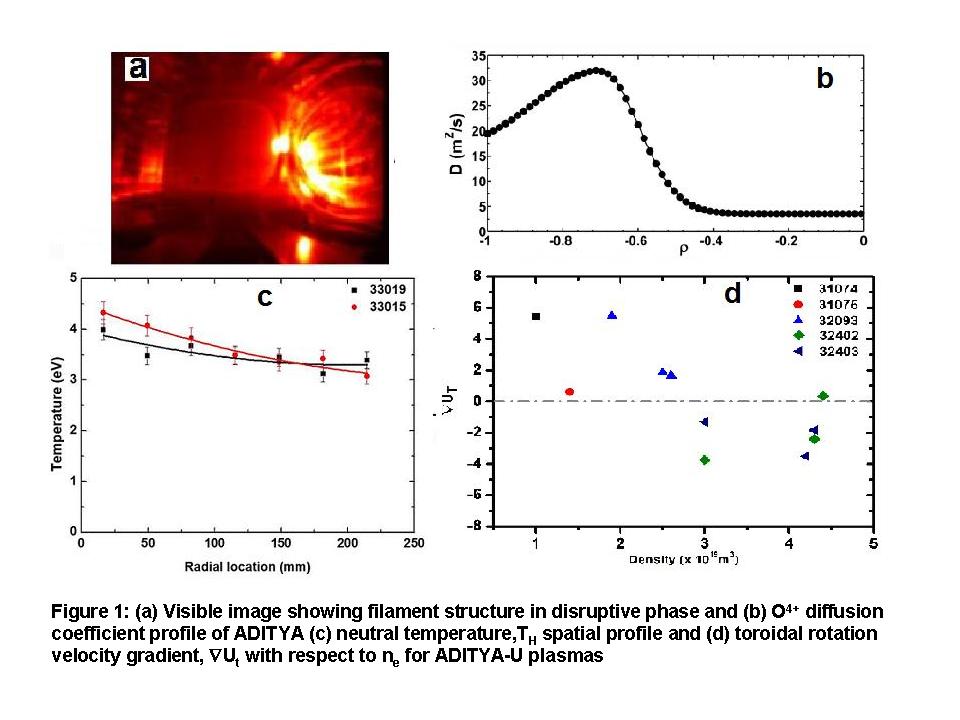